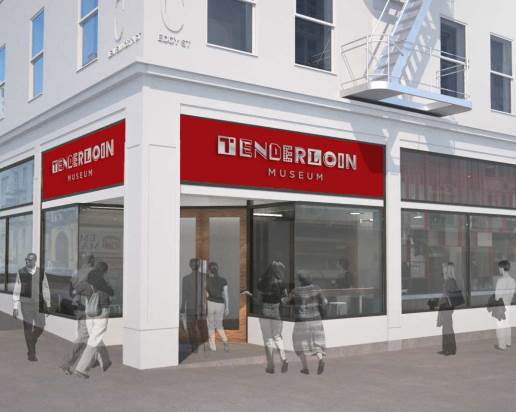 If you ever wanted to help make the Tenderloin Museum a reality, now is the perfect time. Twitter will match all donations—100% tax deductible—made to the museum for the next 23 days up to $20,000. That turns $100 donations into $200, and $1000 into $2000. We’ve made it super easy to donate through our indiegogo page to make your tax-deductible donation.

We have a lot of perks to make your donation even go further, including a signed copy of my book on the Tenderloin that will be out this spring. We’ve also got a great video from city leaders you won’t want to miss.

Construction on the museum began last week. A barricade is being constructed around its Eddy and Leavenworth location. It will soon be transformed by the artistic genius of Rob Duncan and the Mucho design firm into a combination art project and promotion for many of the museum’s key themes.

2015 a Breakout Year for Tenderloin

The Museum’s planned April 2015 opening is one of many new projects opening in the Tenderloin next year.

On December 1, the Bulldog Baths at 130 Turk will hold its soft opening as the city’s premiere kennel for dogs whose owners need to drop them off for hours or days. I will have a story on this remarkable new Tenderloin business next week.

On December 10, 2014, the new and completely rebuilt Boeddeker Park will hold its grand opening event. Also in December is the expected opening of PianoFight nightclub, bar, restaurant and theater at the former home of Original Joe’s, 142 Taylor.

Two destination restaurants will open in the Tenderloin in 2015, along with at least one bar that will further the Tenderloin’s current status as the place to go for fine drinks (eg Rye, Bourbon & Branch, Tradition). Plus The Chairman’s opening on Larkin Street is long overdue and will happen next year (many know it under its former food truck name, Chairman Bau).

Counterpulse dance studio will open on lower Turk next year, returning positive night life to the area. Counterpulse is still raising money for its renovation of the former Gayety theater, so consider offering support.

So check out the museum’s indiegogo site now and double Twitter’s support for the museum.