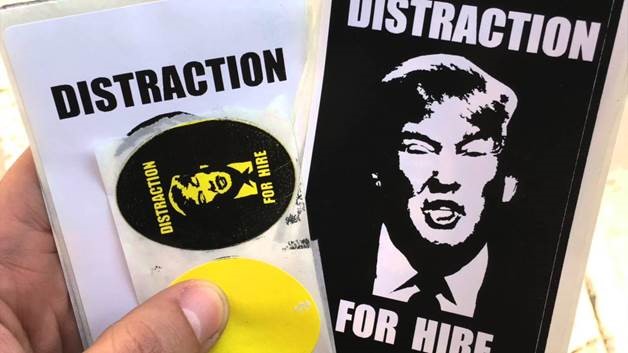 Voting starts on May 5 in San Francisco’s mayoral election, but the excitement that normally accompanies such contests seems missing. The reason? San Franciscans, like most of the nation, are far more focused on the daily misdoings of President Donald Trump than on local elections.

I have been in San Francisco for all of the mayoral elections since 1979. This race has less signage and news coverage, and fewer non-activists are talking about it.

What are people talking about these days? Mueller’s investigation of Trump, Comey’s book on Trump, Stormy Daniels’ lawsuit against Trump, the FBI search of Trump attorney Michael Cohen’s office, corruption by Trump cabinet members, and Trump’s trade war. The only giant non-Trump story in recent months was the anti-gun violence March for Our Lives—and gun violence is not an issue where San Francisco’s mayoral candidates differ.

San Francisco’s focus on national politics has immeasurably helped London Breed and to a lesser degree Jane Kim. It has hurt Mark Leno, who I originally saw as the favorite in the race.

I wrote on January 30, “but the backlash to Breed’s ouster has helped re-position a candidate backed by many Mayor Lee supporters into an agent for change. Amidst the #MeToo movement, female voters particularly see the election of an African-American woman as a powerful message of ‘change.’” I added, “in San Francisco during Donald Trump’s and Harvey Weinstein’s America, changing how women are treated is a front-burner issue.

Some local activists disagreed, claiming that once voters saw Breed’s voting record they would not identify her as a candidate for change. But the preoccupation with national politics has eclipsed interest in specific Breed votes. As has the dominant media frame that there is not really big differences among the three leading candidates.

I don’t recall anyone saying there were not big differences between Art Agnos and John Molinari in 1987, Agnos and Fran k Jordan in 1991, Jordan and Willie Brown in 1995, Brown and Tom Ammiano in 1999, or Matt Gonzalez and Gavin Newsom in 2003. While politically engaged San Franciscans see such differences in the current race, most voters and commentators do not.

For voters focusing on what Donald Trump is doing to the nation, questions about London Breed’s role in eliminating a FordGoBike station in the Lower Haight seem trivial. And they seems trivial because they are trivial in the big picture (and also questionable given the lack of criticism of Supervisor Ronen’s opposition to bike stations in the Mission).

We have an overtly racist president that is (a very partial list) eliminating national monuments at Bears Ears and Grand Staircase-Escalante, seeking to privatize the VA, and banning transgender people from serving in the military (and now saying doctors do not have to treat transgender patients). A president who takes joy in implementing an inhumane and brutal immigration policy designed to inflict misery among Latinos.

Many San Francisco voters want to use the mayoral election to send a message against Trump’s approach. And as I described on March 6, “the San Francisco mayor’s race is unfolding amidst high sensitivity to the systematic injustices perpetrated against African-Americans since they were brought here as slaves.”

A widely circulated recent story in The Atlantic noted that white men are mayors’ in all but three of the nation’s most populous cities (and of those three, Eric Garcetti of Los Angeles, is only ¼ Latino and San Antonio’s mayor is ¼ Filipino). None are women.

The lack of easily recognizable big differences on local issues and the big picture national focus explains why London Breed is leading this race. I believe she is leading not simply due to polling but because Kim and Leno would not be attacking her if she were not ahead.

Jane Kim has also benefited from the nationalization of the race. Kim’s support from Our Revolution, the offshoot of Bernie Sanders’ presidential campaign, has enabled her to connect her candidacy to national politics.

A Kim victory would make her the only Asian-American women mayor of a major U.S. city. It would also be viewed nationally as a big step forward for the Our Revolution movement, and a further sign that the Democratic Party is moving left.

Kim’s challenge is retaining the voters who supported her in her 2016 State Senate race during a June election that will have a much lower voter turnout. Her core backers are highly motivated but that does not always translate into high voter turnout.

According to a mass delivered email I got from Leno last week, his “campaign’s on fire.” Leno is heavily spending to reverse perceptions that his campaign is lagging, a view reasserted last week by Scott Lucas’ SF Magazine article, “Is Mark Leno’s Mayoral Campaign Doomed?”

I don’t think Leno’s campaign is doomed. But national articles that question why the nation’s leading Democratic and progressive cities are almost all run by white men do not help Leno. This is likely why Leno now highlights his support for Jane Kim and urges his supporters and those of Kim to be each other’s second choice. Leno sees his only path to victory in Kim finishing behind him and his getting enough of her second place votes to prevail.

Will the mayor’s race heat up as absentee voting begins? It’s lukewarm now for most voters so the intensity can only go up.