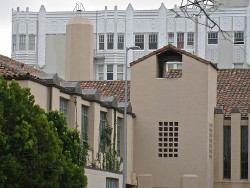 If after years of community involvement and compromise, you thought the future development of the former UC Berkeley site at 55 Laguna would move forward as approved, you may be wrong! The new developer is proposing that instead of building the 49 affordable housing units required under the approved plan, they will pay a fee to the City, which would then use that money to underwrite the affordability of the Openhouse portion of the development. The development would look the same, but would contain 49 more market rate units, generating more income for the developer, and reducing the diversity that makes this neighborhood so great.

Hayes Valley Neighborhood Association (HVNA) is the neighborhood of “yes” when it comes to accepting all kinds of diverse housing needs (affordable, special needs, formally homeless). We are as enthusiastic about accepting dense urban infill as we are a temporary farm or ice cream shops operating out of containers along Octavia Blvd. We are a rare breed. But now we have a development that is having difficulty getting us to accept them, because it is shirking the affordable component. How strange. How can a developer have a problem with us?

In 2003, the nearly 6-acre UC Extension campus (aka 55 Laguna) was shuddered by the University of California. Since the land was zoned public, the University could only use the site for educational purposes and thus the land was not that valuable. UC teamed with a developer, AF Evans Company, and in 2008 got the city to rezone most of the 6-acres to allow mixed use housing. The value of the land skyrocketed. Because the community at-large made the land valuable and facilitated profit-making for the developers and UC, the city and surrounding neighborhoods expected substantial community benefits out of the redevelopment.

HVNA urged the developer to include affordable mixed-income housing, adaptive re-use of the site, and more emphasis on walking, bicycling, and public transit. It took years, and not everybody got what they wanted, but the development that was entitled included 49 affordable housing units out of a total of 330. This is the basic inclusionary housing requirement that is used by the city in all new housing developments, and so was minimal given that the site belongs to the public.

In the meantime, a separate piece of this project, 110 units of senior LGBT housing developed by Open House, was added onto the project as part of a political deal between the Board of Supervisors, our State legislative delegation, the developers, and Open House. The LGBT housing, composed of very small one-room apartments with services like kitchens and elderly care on-site, was at first market rate, but then switched to being underwritten by grants from the Mayor’s Office of Housing through conventional affordable housing funding sources.

When 55 Laguna was entitled in 2008, and value accrued to the UC and the developer, there were to be 110 LGBT senior housing units AND 49 affordable units available to anyone that needed them. That was the negotiated settlement between the city, the community, the University, and the developer. However, the project was delayed due to the global real estate bubble, and AF Evans went bankrupt. The project was in limbo.

Over the last few months a new developer, Atlanta-based Woods Partners LLC, has entered the picture and is negotiating to take over the project. They have stated that they will not deviate from what was originally entitled and are eager to build in San Francisco. Their entry reflects the broader real estate trend of larger-scale developers interested in urban infill, and particularly in rental housing. With our work on the Market and Octavia Plan, we’ve made the neighborhood a very attractive place to live, and to invest, and so once financing is in place, we’ll see a lot of development like this.

But there is a BIG change in the Woods LLC proposal for 55 Laguna. The 49 units of affordable housing are in jeopardy. In December 2010, without community knowledge or input, the developer and the Mayor’s Office of Housing (MOH) came to an agreement that the developer could pay an in-lieu fee instead of building the affordable housing on site. The in-lieu fee would then be used to underwrite most of the Open House component of the project because the Mayor’s Office of Housing had no money to fulfill its part of the 2008 deal.

If this looks like a classic “robbing Peter to pay Paul,” that’s because it is. And it is very unfortunate for our community.

HVNA is urging the developer and the city to rethink the loss of 49 units of affordable rental housing open to all who need it. It would be a major loss because the Hayes Valley and Upper Market Street corridor are ripe for development, but rents are sky-high. If this deal goes through, it further solidifies the alarming-trend of making this area exclusive.

So we’ve asked the city to consider finding the money it originally promised, and we’ve asked the developer to consider reducing parking, which is very expensive to construct, as a way of building in more affordable housing. We believe that the Mayor’s Office of Housing, mapping future development in the city, can identify forthcoming development fees or other sources that can be used to help with Open House.

The developer, standing to make huge profits, should be expected to also give a little to Open House without robbing desperately needed affordable housing in our community. We believe something can be worked-out to keep the project on track and to ensure affordability for ALL of those in need. But this will only happen if the community demands it.

The scheme by the MOH and developer would set a terrible precedent where monied developers could petition the City to make changes against the social interest, claiming that they will leave properties derelict unless they receive concessions.

Please contact your supervisor and planning commission members to tell them you are in favor of keeping the development structured as is, and NOT making a change that benefits only the developer. You can get a sample letter and addresses on the HVNA website.

A hearing on the affordable housing at 55 Laguna is scheduled for August 4th at the San Francisco Planning Commission.