Trombone Shorty Comes to the Independent 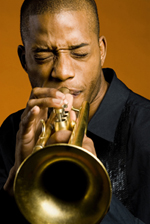 I’ve always dug the trombone and loved how jazz legends like Glenn Ferris and Bill Watrous virtually blew my mind back in the day with their playing. So when my neighbor, fellow music lover and club owner Michael O’Connor tells me about this mind-bending trombonist I ought to check out, I listen. Shorty’s press release states, “Every once in a blue moon along comes someone who can merge the forces of virtuosity and exuberance and unleash them on an unsuspecting public. The latest in this exclusive line of blue moon arrivals is Troy “Trombone Shorty” Andrews. Andrews plays trombone and trumpet. He is a man to be reckoned with on both. A product of New Orleans’ culturally rich Treme neighborhood, Andrews was a bandleader by the age of 6.” This incredible talent brings his “Orleans Avenue” combo to the Independent for tonight’s sold out show and again on Saturday night for what will surely be an unforgettable evening of music.

Shorty’s press release goes on to say that, “While Andrews was navigating New Orleans as a youngster with his band in tow, he was also absorbing lessons at the knee of his older brother James, a dynamic musical performer known as “Satchmo of the Ghetto.” It is safe to say that by the time Andrews hit his early teens, he had a PhD in the ways of the streets, which you can still hear in his music. But he has also grown into a performer emanating elegance and class; gleaned from his successful studies at the prestigious New Orleans Center for the Creative Arts (NOCCA). As a graduate he joined the ranks of other grads like Wynton and Branford Marsalis, Harry Connick Jr., and Nicholas Payton.

In 2005, Andrews was tapped by Lenny Kravitz to be a featured member of his horn section for a world tour. A tour that shared billing with acts such as Aerosmith. In London, during the summer of 2006, Andrews began working with producer Bob Ezrin and U2 at Abbey Road Studios. This association led to Andrews performing with U2 and Green Day during the re-opening spectacular of the New Orleans Superdome for the NFL’s Monday Night Football pre-game show. The show aired live on ESPN and was broadcast internationally by Westwood One.

To wrap up 2006, Andrews made his acting debut on the NBC television series “Studio 60 on the Sunset Strip.” Leading a group of New Orleans musicians, his musical performance of the holiday classic “O Holy Night” drew such an enthusiastic response from viewers that NBC released the single for free download on their web site. Kicking off 2007, New Orleans’ premier music magazine, Offbeat, named Andrews their Performer of the Year. He also garnered honors as Best Contemporary Jazz Performer.

The here and now finds Andrews a fully developed performer locked, loaded and bursting into international consciousness. His current project is Orleans Avenue, a funk/pop/hip-hop mix populated with musicians like Andrews who are young in age only. Orleans Avenue brings the heat winding audiences up in merry confusion. Jazz fans shake their heads in unexpected delight while the funksters shake what they got with glee. Things reach a fever pitch as Andrews starts his circular breathing–one note sustained in pristine beauty while the band vamps on a second line beat and sax player James Martin dances so ugly it’s funky.

Virtuosity and exuberance, Orleans Avenue effortlessly combines both. With Mike Ballard on bass, Pete Murano on guitar, Dan Oestreicher on baritone sax, Joey Peebles on drums and Dwayne Williams on percussion , their performances transcend the boundaries of generations and classification. Trombone Shorty and Orleans Avenue is high energy, high octane and highly contagious.”