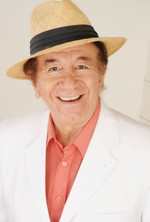 Trini Lopez’s personality and talent hit the charts big with his “If I Had a Hammer” and it became a huge hit. He hammered it up to the Top of the notch for more than a year. It was a resounding success. Lopez, who is now playing at San Francisco’s famed Show Room at the Nikko Hotel, really knows how to charm an audience. He even charmed Frank Sinatra who signed Lopez to his personal label – “Reprise”. That enabled Trini to record his first album in his own name.

Trini brings back the Night Club Atmosphere of yesteryear, with a terrific Band as patrons sip their drink – and clink their glasses to the wonderful, exciting Latin Beat. In this show he revealed a secret. “Actually, Lopez is not my real name — I am not Latino. Just thought I would let you know that!” – He said. Some in the audience might have been a little surprised – but they really adored hearing and seeing him again.

The Room was really rocking with “Route 66” – “Michael Row the Boat Ashore” and the fabulous thrilling “America” – from West Side Story. And the audience and myself were standing up and swinging and swaying to the beat of “La Bamba”.

Trini has it all. Great Talent – Great Personality – and his musical Guitar genius is the best I’ve ever heard. Best rousing fantastic evening I’ve heard in years.

THE SCOTTSBORO BOYS: THE OPENING SCENE

A Black woman sits on a bench waiting for a bus. She does not speak in this scene. At another time the bus arrives – she finds a seat up near the front of the bus. She is told by the Bus Driver: “Coloreds in the back” – and she fires back: – “I wont sit in the back, no more. NO MORE!” And she stayed where she was.

The Kander and Ebb music will keep you rocking with numbers like “Minstrel March/Hey Hey” and “The Scottsboro Boys” sure will keep you on your toes with toe- tapping exciting music and sounds. Here are a few more exciting musical stories: “Electric Chair” – “Go Back Home” (they find that they can’t) and “Shout” – enormously exciting.

The Scottsboro Boys is a musical with a huge heart – and one of the most rousing entertainments you’ll ever hear.

It’s a horrible part of American History. But, the terrific and brilliant choreography and direction by Susan Stroman will make you enjoy the whole trip. The Kander and Ebb Music will bring you to tears along with some laughs. I think you’ll definitely want to see it again! The story is based on the tragedy of the real Scottsboro Boys. The cast in this appearance at A.C.T. is “Flat-Out—Fantastic!”