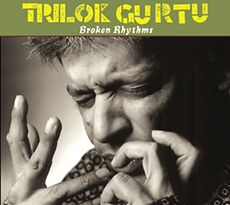 Those fortunate enough to have seen Trilok Gurtu at the Stern Grove Festival, last year, will delight at his latest album, “Broken Rhythms”. Gurtu’s fantastic tabla playing, combined with his custom percussion set, and his amazing command of Indian Ragas, are something that has to be seen to be believed. I can still vividly recall the many times I’ve seen Gurtu.

One particularly memorable moment was at Yoshi’s, when he was joined by another vituoso of Indian tabla playing, the awesome Zakir Hussain. With “Remembrance” , his previous album, there were plenty of guest stars, but they’re Indian singers, such as Shankar Mahadevan, and instrumentalists, such as Zakir Hussain, Sultan Khan and Ronu Majumdar, a stunning flute player. But this is not pure Indian music – it’s an entertaining fusion of Gurtu’s musical passions with a liberal dose of electronic, sequenced percussion and synthesized textures swirling among the sitars and clay pots.

Born into a highly musical family in Bombay, India, Trilok Gurtu is both a master musician and a renowned composer. With his inventive compositions, lying somewhere between world fusion and modern jazz, Gurtu deftly bridges the musical traditions of the eastern and western worlds. It has been said that his move to incorporate more western instruments, raised the ire of India’s purists, but with the advent of Gurtu’s worldwide acclaim, they soon welcomed him home as the prodigal son.

Gurtu’s family was a constant influence on his musical career. His grandfather, a noted sitar player, and his mother, the famous Shobba Gurtu, (a classical Indian singing star), encouraged his musical education. Trilok began to study the tablas at age six. In 1976, his training paid off and Gurtu traveled to Europe where he played with trumpeter Don Cherry for two years, and years later, with Cherry’s daughter Neneh.

Gurtu went on to build his performance experience by touring the world from 1984 to 1988 with the acoustic jazz group Oregon, following the death of percussionist Colin Walcott. In 1988, he appeared at numerous European festivals with his own group and began to present his own compositions. Gurtu’s debut album Usfret, followed shortly to critical acclaim. Many musicians, including Talvin Singh, Asian Dub Foundation, and Nitin Sawhney site this record as an important influence, and Gurtu’s songs are still played in dance clubs across the globe!

In 2000, Gurtu released a wonderful album, and my personal favorite, African Fantasy on Blue Thumb World Music, (simply amazing…), and followed up with The Beat of Love in 2001 on Universal, journeying into the intoxicating meeting of Indian and African music. The Beat of Love boasts an extraordinary list of today’s most renowned African vocalists, including Benin-born Angelique Kidjo, Malian griot Salif Keita, the great Wasis Diop of Senegal, Jabu Khanyile of South Africa, and Sabine Kabongo, formerly with Zap Mama. Several tracks on the album also feature Indian vocalists and top “Bollywood” musicians. The Beat of Love was composed in part by Chris Difford of Squeeze and produced by celebrated producer Wally Badarou.

Over the years, Gurtu has collaborated with many prominent musicians. He has toured and recorded extensively with the Mahavishnu Orchestra’s, John McLaughlin, and bassist Kai Eckhardt, as well as with classical performers Katia and Marielle Labeque. In the summer of 1993, Gurtu also toured with his own trio in support of the album The Crazy Saints which also featured the keyboardist, Joe Zawinul and guitarist, Pat Metheny.

Gurtu’s compositions link subtle Indian rhythms and Indian singing with elements of modern jazz, rock, and traditional African music. He and his bands have performed with a range of influential artists, including Nitin Sawhney and Pharoah Sanders, as well as Lalo Schifrin, Gilberto Gil, and Bill Laswell.

Gurtu’s percussion kit, is an incredible combination of splash and crash cymbals, custom made tom toms, “baby snare” drums, a hybrid conga-kick drum, beads, bells, bowls of water, tables, wood blocks, just to name a few. That he plays all of this on his knees, all night is simply unreal. There is no one on earth who plays percussion like Gurtu does.

Gurtu’s “Broken Rhythms”, is very much like a compilation album, as it seem to blend influences from Trilok’s entire carreer. If you are a first time listener, this would be a great place to start.

E. “Doc” Smith is a musician and recording engineer who has worked with the likes of Brian Eno, Madonna, Warren Zevon, Mickey Hart, Jimmy Cliff, and Sandip Burman among others. He is also the inventor of the musical instrument, the Drummstick. He can be reached at drummstick@earthlink.net