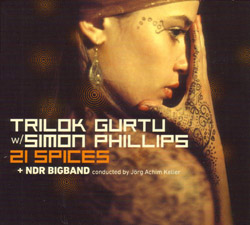 Trilok Gurtu and Simon Phillips have long wanted to make music together, and they did so in May 2010. These two leading drummers worked together within the framework of an NDR Big Band production. Arranged by Wolf Kerschek, directed by Jorg Achim Keller and supported by Michel Alibo on double bass and Roland Cabezas on guitar, this collaboration with the NDR Big Band was pure musical enjoyment. In a mix of studio and live recordings, the album documents for all those who could not attend the program’s premiere at the Drums’ n’ Percussion Festival in Paderborn on May 21, 2010, or the Elb jazzfestival in Hamburg the furious energy of a drummers’ cooperation which was raised to a new level of tonal diversity and musical refinement through the NDR Big Band’s backing. Producer Walter Quintus was responsible for the audiophile sound.

It is not necessarily a plus in terms of musical enjoyment when two leading drummers take the stage together. However “21 spices” was a success, enthusiastically acclaimed by both press and public at several concerts last spring. For Wolf Kerschek, as arranger of these titles composed by Trilok Gurtu, had chosen the soloists for the NDR Big Band carefully. Two guests stood on the stage whose musical roots could hardly be more different: the Indian tabla specialist and drummer Trilok Gurtu, who was also involved in the conception together with the producer Joachim Becker, and the Briton Simon Phillips, who is famous through his work with the rock band Toto.

The result of the combination is all the more fascinating since the project was further spiced by Michel Alibo on the double bass and Roland Cabezas on guitar. “21 Spices” refers to the 21 musicians involved, who give the music character – sometimes strident, sometimes subdued – and have created an unusual sound experience. For example “Piece of Five”, the introduction into the seven songs on the album which capture the essence of the encounter. It is an excursion through the musical worlds, at first seemingly classical with subdued, diffuse wind instruments and discreet tabla refined by a faint presentiment of fusion. this is followed by a gradually increasing sonority, led by Lutz Büchner’s saxophone played expressively with elegant increases and decreases in intensity. It is the “opener” for the actual fireworks, which follow immediately after in “1-2 beaucoup” including Gurtu’s striking speech percussion.

The structure shows the conductor Jörg Achim Keller understands how circumspectly to deal with the individualities of his guests. Trilok Gurtu, for example, is a pioneer of crossing style boundaries but his roots still lie firmly in the tradition of his Indian homeland. Born in Bombay and raised in a musical, cosmopolitan family, already as a child he played in various percussion groups. He left India in the seventies, found his way into the ethno-jazz scene through Charlie Mariano and travelled with such greats as Ohn Mclaughlin, Joe Zawinul and Pat Metheny during the following decade. Gurtu became a member of Oregon and his name soon also became symbolic of the demanding connection of percussive worlds. He has lived in Hamburg for a long time and has left his mark on world jazz history through his numerous projects including cooperation with Africans such as the singer Salif Keita.

On the other hand, for many Simon Phillips is the best, most precise, drummer today. He was born in London and was introduced very early into the world of professional music by his father, who was also a drummer. Phillips passed his baptism of fire as part of the team for “Jesus Christ Superstar”. He became known to a larger public initially as Mike Oldfield’s drummer and then, particularly, as Jeff Pocaro’s successor in the high-class rock combo Toto. In the meantime the list of his recordings and work reads like an encyclopedia of rock history and stretches from Peter Gabriel and Gary Moore over Asia and The Who to Judas Priest and Joe Satriani. The bass guitarist Michel Alibo from Martinque is well known particularly to those familiar with the French and African jazz scene.

During the last decade he could be heard playing with, among others, Salif keita, Nguyên Lê and the band Sixun and also in some of his own projects. finally, the German-Spanish guitarist Roland Cabezas was born in Hamburg, has belonged to Trilok Gurtu’S working band for about three years and has received attention at the side of colleagues such As Jan Garbarek, Oumou Sangare and also David Knopler. So an illustrious team of soloists plays together for “21 Spices” and they have the additional luxury of being backed by an excellent Big Band.

The northern Germany radio (NDR) NDR Big Band is one of the highlights in the German jazz landscape. It goes back to the time after the war when the allies restructured the radio network and a radio dance orchestra was established. The programs were limited mainly to entertainment till the beginning of the sixties. From 1963, however, jazz projects were also increasingly included in the ensemble’s repertoire. During the seventies, the dance orchestra slowly turned into a jazz Big Band all of whose soloists, due to their individualities and ideas, contributed to the creation of unusual programs.

In 1980 the pianist Dieter Glawischnig was made conductor of the ensemble; he was the right man for the job and turned The NDR Big Band into an orchestra which became known internationally for its unusual recordings. He invited guests such as Carla Bley, Joachim Kühn and Bennie Wallace for concert projects, created programs with Michael Gibbs, George Gruntz and Colin towns and ensured that the ensemble was one of the highlights of many festivals, such as Jazz Baltica. When he passed on his baton to Jörg Achim Keller in 2008, his Swiss colleague continued the brilliant work, which has made such musically complex fusions as “21 spices” possible.

In line with the NDR Big Band’s method of working, projects such as with Jo?o Bosco, Omar Sosa or Trilok Gurtu and Simon Phillips are set up in the rehearsals and then presented at several concerts when they are recorded for the jazz world by the professional radio team. The “21 spices” recording, therefore, has the feeling of one single event which presents a special project with exceptional musicians arranged for a concert season.

Mixing live recordings with studio tracks, ‘21 Spices’ (named after the number of musicians involved) documents a work originally premiered at the Drums’n’Percussion Festival in Paderborn in May 2010. Occasionally strident, sometimes subdued, this recording is a unique excursion through contrasting musical worlds.