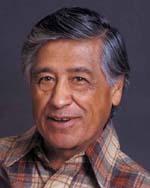 Editor’s Note: This essay, “Tribute to Cesar Estrada Chavez,” was written by Minh Jeffrey Anh Le of San Francisco, who shares it with his schoolmates by reciting it at an all school assembly on March 31, 2006, Cesar Chavez Day.

Many people know me, Cesar Chavez, as the man who helped Mexican-American workers get their rights, but many sacrifices and hardships were made, making the struggle truly difficult. My family and I lost everything we owned during the Great Depression because we couldn’t pay the taxes for our farm. Other families and mine moved to California in search of jobs. When I worked in the fields, I saw horrible conditions, such as racism and unfairness to the workers. The farmers beat them and sprayed pesticides on them and the crops, making the workers and their children sick. The farms were always overcrowded and had no bathrooms or running water.

In my few years in school, I also experienced racism from the students and even the teachers. Most of them hated Latino children like me and even punished me for speaking my birth tongue, Spanish. By the time I finished eighth grade, I had moved through 37 schools. My dad had just been in a car accident, so instead of continuing with my schooling, I had to work full-time in the field.

In 1946, I married a beautiful lady, Helen Fabela. We moved to a small, poor, and overcrowded neighborhood, Sal Si Puedes, which meant “get out if you can,” a horrible name, in my opinion. One kind and generous priest, Father McDonnell, talked to my family about fair wages, and the right for children to have an education. He introduced me to the writings of Pope Leo XIII, who wrote about having a reasonable wage and for people to live a decent life. Although I had trouble reading because of my lack of education, I read to my family every night. I read the Bible. I read the writings of not only Pope Leo, but also Martin Luther King, Jr., St. Francis of Assisi, and Mahatma Gandhi. In the writings, I learned that non-violence was the best way to get your point across to the people.

I soon worked for Community Service Organization (CSO), an organization that encouraged Mexican-Americans to register to vote. I had recruited over a thousand new voters. But soon I thought to myself, farm workers needed a union to protect them. The CSO disagreed with me, so I resigned my head position at the CSO after 10 years, and created the National Farm Workers Association (NFWA). I went around from farm to farm finding people to support the union. At first, workers were scared to talk to me because they thought that they would be fired, but slowly I convinced them to join. At the first meeting, over 300 people came. I discussed with them about fairness in working conditions and the right to have a decent wage.

Our first strike was against the Mount Arbor Company, a company that was not paying its promised wage. In a matter of four days, the company gave in, which encouraged more workers to join the NFWA. This was our first victory. After many more victories that followed, I learned one thing, “There is no such thing as defeat in non-violence” – – a common quote of mine that many people appreciate. When violence broke out, I would fast until the violence would cease, sometimes losing over 36 pounds.

The largest strike that I ever organized was the Great Grape Strike. On our last march, a 300-mile march from Delano to Sacramento, California, we finally announced that the grape growers gave in to our demands. This was then that the first law was made to protect Mexican-American farm workers.

I was awarded Mexico’s highest honor, the Aguila Azteca, and the United States’ highest civilian honor, the Presidential Medal of Honor, posthumously.

During the period of a trial against a lettuce grower, I died in my sleep on the 23rd of April 1993. You now celebrate my life on Cesar Chavez Day, March 31st.

I hope that this young generation has learned from my teachings and I hope that you all will follow in my footsteps of helping people in need.