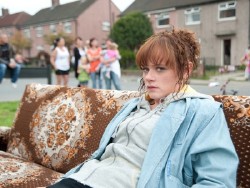 Brillante Mendoza’s camera makes viewers partial participants in the worlds inhabited by “Lola”’s poverty-level protagonists. The viewer follows a character’s labyrinthine path in pursuit of a task whose importance seems a matter of faith. For those willing to follow Mendoza’s lead, “Lola” pays off with a penetrating look at Philippine criminal justice.

The titular Lolas are two grandmothers whose paths cross thanks to a robbery/homicide case. Lola Puring’s grandson Mateo Burgos is accused of and arrested for fatally stabbing Lola Josefa’s grandson Arnold Quimpo for his cell phone. Both grandmothers pursue different paths to emotional closure. Josefa wants to throw a proper funeral for Arnold while Puring wants to get Mateo out of jail. Yet the cost of each Lola’s closure strain both their financial and emotional resources.

Despite their differences, Purling and Josefa both single-mindedly pursue any means to achieve their ends. Lola Purling resorts to cheating customers to raise money for Mateo’s defense. Lola Josefa decides to pawn her ATM pension card to finance the funeral costs.

The Philippines’ handling of crime on an individual and societal level seems proximate to the American situation. The public attorney pushes Lola Purling to settle the case quickly with Lola Josefa. The police use the chaos caused by a crime to steal ordinary citizens’ hard-won earnings.

Despite the grim subject matter, it’s amazing to see the beautiful images captured by Mendoza. The boat funeral procession offers images of an ancient rite of passage brought into the modern age. The heavy rain sequences feel like visual symbols of the various forces trying to emotionally beat down its main characters.

Francisco Ordonez’ “Cookie” tells the story of an alleged pickpocketing by a street prostitute and what happened next. The setup is efficiently conveyed, with the protagonists’ roles of alpha male, yes man, and relative innocent being conveyed through half camaraderie/half bragging dialogue. Using momentary freeze frames to introduce the characters didn’t quite work since the pimp seemed missing from the film’s central action.

The film offers a fair sense of how the supposedly tight friendship between Joey and Carlos begins to unravel. However, that’s an inadequate audience takeaway for a short film. A viewer needs to have both a strong reaction to the short itself by the time the credits roll and also feel that the story can be easily expanded.

There’s nothing inherently wrong with “Cookie”’s jumpy visual style. But when the story’s most shocking event occurs, the moment surely calls for some kinetic visuals to match the abruptness of the incident. By keeping the viewer at a visual remove, the moment’s dramatic power is drained of emotional impact.

“Cookie” is a decent effort. It’s just not a memorable one.

The short film uses vintage photographs, interviews with Weglyn, and even footage from the old “Perry Como” show to tell an extraordinary story. Weglyn was a former Japanese-American internee who managed to eventually build a show business career despite that earlier injustice. She also married a German Jew at a time when interracial marriages were illegal in some states.

But it was the confluence of Ramsey Clark’s official denial of American concentration camps combined with Arthur Morse’s book on how FDR ignored the Holocaust that spurred her new direction in life. Eight years of primary source research on the internment of Japanese-Americans led to a best-selling book which provided the evidentiary foundation for the reparations movement.

Many points are scored for bringing Weglyn’s little known debunking of an American government coverup back for new audiences. However, its straightforward presentation style fails to give Weglyn and her historic contribution a sense of outrage.

Joshua Bell and John Cromwell’s “A .45 at 50th” tells an intriguing story from actor James Cromwell’s younger days. Through dramatic recreations and actor James Cromwell’s monologues, the film tells how Cromwell used his vacationing parents’ 50th Avenue apartment to provide an impromptu safe house for Black Panther Elbert “Big Man” Howard. However, the presentation and storytelling never rise above the level of a good after dinner story.

“The Arbor” may be a double entendre referring to Yorkshire’s notorious Brafferton Arbor and the title of Andrea Dunbar’s noted semi-autobiographical play. Yet Clio Barnard’s compellingly hypnotic experimental documentary is also a societal ghost story. Poverty’s miseries, such as anti-Pakistani racism and drug abuse, haunt the Arbor’s housing project inhabitants despite the passage of decades. But the film’s major haunted soul is Dunbar’s mixed race daughter Lorraine, who blames her drug and sexual abuse-ridden life on the late playwright’s behavior.

“The Arbor”’s soundtrack contains excerpts from 90 hours of interviews with Lorraine and other Dunbar family survivors. Yet their painful statements and disturbing anecdotes are not treated as holy writ. The film employs verbatim theater techniques, where actors lipsynch the interview soundtrack.

The result is neither Studs Terkel on crack, or high culture drag queen performance. Instead, viewers constantly question how much honesty or self-deception lie behind the interviewees’ words. Manjinder Virk hypnotizes as Lorraine while also implicitly questioning her character’s veracity.

In fact, Barnard does not want viewers to see her film as presenting the unvarnished truth about the world of The Arbor. In its performed excerpts from Dunbar’s play and TV arts programs featuring the real-life Andrea Dunbar, “The Arbor” presents craftily selected pieces of reality assembled to create the illusion of wholeness. Discovering the holes and deducing the missing realities is the viewer’s job. Adventurous viewers will welcome the task.