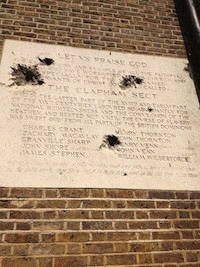 Traveling from Paris to London is a breeze these days, all one needs is a passport and a ticket aboard the high-speed train, the Eurostar. So taking advantage of a brief break from my musical adventures in France, we arrived at St. Pancras station in London and traveled to a lovely part of town known as Clapham Commons. A beautiful mix of brick homes and trendy shops, Clapham is also centrally located with easy access to all parts of the city by bus or tube.

Clapham Commons is also home of the Holy Trinity Clapham Church; where the song “Amazing Grace” was born and the British abolitionist movement against the slave trade with William Wilberforce took hold. The great film 2006 “Amazing Grace”, with Ioan Gruffudd and Albert Finney captures the events of that era quite well.

The Tower of London, Parliament and Westminster Abbey

Getting an “Oyster Card” and taking the No. 88 bus from Clapham is great, as it follows one of the best routes for sightseeing in London; from the train station at Vauxhall, past “007’s Office”, aka MI-6, to Westminster Abbey, New Scotland Yard, the Houses of Parliament, “Big Ben” and Trafalgar and Piccadilly Square. If you can get a seat up front and atop one the hybrid-diesel double decker buses, you are in for a treat, and for only a few pounds.

I was shocked at the amount of construction going on in London, and not all of it very pretty. London is so expensive that it seems only the wealthy, or the newly, well heeled immigrants from Russia and Poland can afford it. If San Franciscans think we have a housing crisis, (and we do), they should see what is happening in London and take heed.

Tourists were everywhere; I heard more languages in London than I could count. Outside the gates of Parliament, is a statue of Oliver Cromwell, “Lord Protector of England”. Cromwell’s corpse met a grisly fate at the hands of King Charles’ son; payback for the beheading of his dad, King Charles. Charles II actually dug Cromwell up, chopped him to bits and displayed Oliver’s head on the gates! The film version with Richard Harris omits this gruesome fact.

A short bus or tube ride to Tower Hill, brings you to the macabre, historic venue of the Tower Bridge and the Tower of London. The British seem to celebrate their grisly history in a variety of venues, none perhaps more popular than the Tower of London, the scene of many a beheading, heretical burnings and executions; Mary Queen of Scots, Anne Boleyn and many, many others. If that’s your thing, you may want to visit the torture museum in Carcassonne when you are in France; feel free to visit them both twice for this writer!

Back on the 88 bus again, you can ride past the famed Piccadilly and Trafalgar Squares; home of London’s great theaters and historical statues of Winston Churchill and Lord Nelson. I’ve lived in NYC, seen Times Square at rush hour, but nothing compares to a Friday night with a million pedestrians racing for home. Critical Mass on feet; it’s amazing one can even walk downtown, as it is absolutely packed on a daily basis. Only the buses, cabbies and a few hearty vehicles can traverse this area.

At the end of the line is the incredible open air market of Camden Town. Camden is like Haight Street, Canal Street and DC’s Eastern Market times 100; all day every day. I’ve never seen anything like it. Every kind of food, art, music, and wares are on display; It would take days to see it all.

Vegan restaurants with DJ cello players; a Shaka Zulu themed night club; t-shirts, CDs, bags, leather, denim, buttons, furniture; you name it, Camden Town has it and it seemed to never end. One place you do not want to miss when you visit London to be sure.

With London and all its glory behind us, it was time to venture out into the country side. Several years ago, we visited Bath, the home of Jane Austen and the Bath International Music Festival. This time, it was time to see family and friends in the suburbs of Kent and the famed college town of Cambridge. Cambridge was lovely; teeming with “punters”, students and faculty we jumped at the chance drive into the country side, and experience a bit of the folks out there. Surprisings, there was a lovely music festival 20 miles away; great rock, jazz, folk and food- This was the England we came to see. After a few pints of ale and some of the best fish and chips I’ve ever had, it was time to head back to the city. Unfortunately, Sunday seems to be the day when England has issues with rail service, either on the tube or the GreaterAnglia lines. Being a tourist, I didn’t mind; the locals however made their feelings know in a hilariously acerbic, and uniquely British way.

Wimbledon is the mecca for tennis players, and tickets can be had- for a price. Tickets that aren’t gotten through a lottery can be gotten one of several ways; you can spend over $1000 for day one, Center Court seats via Stub Hub, or camp out early Sunday morning and “que” for one of only 1500 show court seats. Another 6000 are available for the grounds and the outer courts, but they will also require waiting in line for several hours. Camping out wasn’t an option for us this year; much more comfortable to be dining and watching from the comfort of a country home with long lost friends, but next year the nephews will assist me in procuring the the much sought after seats. The weather was freezing in London by the way and combined with their beloved Andy Murray, Roger Federer, Maria Sharapova and Rafael Nadal on the opening day card; Wimbledon saw 1710 souls; a record number of fans; some even camping out on Saturday night for only 1500 tickets, and by 11:00 am Sunday, the tickets for opening day were gone. Alas, so was Rafael Nadal, who suffered his first ever loss in the first round of a Grand Slam at the hand of a Belgian ranked 135 in the world.

Today, we are off to Lisbon, Portugal for more music, food and friends, before heading back to France. Cheers!