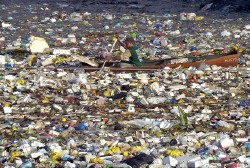 Imagine a heap of trash and plastic bottles twice the size of the state of Texas floating around in the ocean 1,000 miles off the coast of California, and you’ve got what is being called the Great Pacific Garbage Patch.

Before you dismiss this as a freak occurrence, you should know that there is a similar patch in the Atlantic and probably one in every ocean on the planet. Thanks humankind, for outstanding achievement in trashing our mother earth.

It’s not enough that we seem incapable of picking up after ourselves, but our carelessness is affecting every creature that lives in the waters that dominate our blue planet. The shards of plastic from bottles and things, made brittle by the sun’s ultraviolet rays, end up in the bodies of fish and other creatures, who die from ingesting them.

Scientists aren’t sure exactly how these heaps collect, except that bottles and other objects probably come into the oceans through drain pipes and rivers. The refuse is then swirled around and into ocean vortices and end up in what are called gyres or converging currents.

In order to study what can be done to reduce or eliminate these dangers to sea life, a team of scientists left San Francisco a month ago on two ships bound for the aquatic junkyard. They are part of Project Kaisei (a Japanese word for “ocean planet”), a nonprofit research outfit, working in partnership with the Scripps Institution of oceanography in La Jolla, California.

“More and more now, you see signs of marine debris and plastic everyplace,” said Mary Crowley, co-founder of Kaisei. “You can be at very remote beaches, and you’ll see plastic bottles, barrels, toys and a lot of plastic fishing nets,”

As for whether the trash can be removed from the waters, Holly Bamford, director of National Oceanic and Atmospheric Administration in Silver Spring, Maryland, told the San Jose Mercury-News, “The large pieces, it is possible to pull them out of the ocean. The small plastic bits, that’s to be determined. Until we understand the extent, the size and exactly where they are, we won’t be able to make a determination of how they can be removed or if they can be removed.”

In addition to the huge pile of garbage, the Pacific now contains six pounds of trash to every pound of plankton. The United Nations Environment Programme says that every square mile of ocean contains at least 46,000 pieces of brittle plastic.

It doesn’t get much better: From 1996 to 2006, 1.1 million pounds of fishing gears were cleaned from the reefs and beaches of some Hawaiian islands. That’s in addition to the usual cigarette lighters, toothbrushes, and other assorted litter that usually washes up on these shores.

Not all the junk ends up where it’s visible: Greenpeace reports that 70% of the human waste that ends up in the oceans finds its way to the bottom of the water.

Forget beautifully carved boats with gold and urns of olive oil. Our civilization’s legacy will be the tons of crap future archeologists will find on the floors of the world’s once-beautiful oceans.