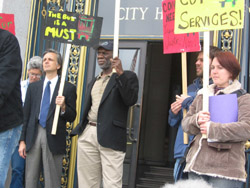 A broad coalition of almost every transit advocacy group in San Francisco, along with a variety of social justice advocacy groups and environmentalists, declared their unified support yesterday for a platform calling on Muni to immediately seek new sources of revenue to avoid future fare hikes and service cuts. The platform, called ‘San Franciscans for a Better Muni,’ commended the Municipal Transportation Agency (MTA) for avoiding hikes and cuts this year. However, it also pointed out that due to Muni’s structural deficit, unless major steps are taken immediately to secure new sources of money, transit riders can expect to pay more for worse service in the near future.

When unveiling this year’s budget to the Board of Supervisor’s Budget and Finance Committee yesterday, the MTA revealed that their agency continues to fight a structural deficit problem. Data complied by the MTA showed a projected $43.7 million deficit in 2008-09, which will likely grow every year thereafter. The MTA’s projections ended at 2011-12, when the deficit is expected to reach $61.4 million.

As a variety of transit advocates stated at yesterday’s hearing, this massive projected deficit requires quick and decisive action to avoid fare hikes and service cuts in the near future.

While revenue ideas varied among different groups, every organization agreed on one thing in their joint statement, ‘San Franciscans for a Better Muni’ – to avoid service cuts and fare hikes, revenue needed to be pursued aggressively immediately. Signatories to the platform included the Bike Coalition, Transportation for a Livable City, San Francisco Planning and Urban Research, Rescue Muni, and Coalition for Transit Justice.

Noting the diversity of this coalition, Supervisor Chris Daly, who led the fight at the Board of Supervisors against last year’s MTA budget, suggested that Muni should address their structural deficit as soon as possible.

To that end, MTA Director Nathaniel Ford agreed to return to the Budget and Finance Committee in the coming weeks with a 5-year plan for raising revenue and balancing the MTA’s budget.

Casey Mills is a member of the Coalition for Transit Justice.