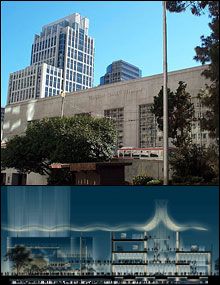 The Board of Supervisors voted Tuesday to keep alive a two-year-old project to construct a state-of-the-art transportation hub. Although the Board chose to return several elements of the plan to the Land Use Committee, the essence of the proposal, which Supervisor Chris Daly described as “uncontroversial,” passed the Board.

Estimates for the cost of the terminal range from $2-4 billion. It would link the major transit providers of Northern California–Caltrain, Amtrak, and BART–with municipal transit networks. A state bond measure, scheduled to be submitted to voters in 2008, will request funding for an additional high-speed rail line that could transport riders to Los Angeles in 2 1/2 hours.

The project’s history has been rocky since its planners–the Transbay Joint Powers Authority, in concert with Mayor Gavin Newsom–bumped into a real estate problem in May 2004. In order to accommodate the bullet train, they needed the land at 80 Natoma Street, where Jack Myers of Myers Development Company had begun work on a 51-story condominium tower.

When Myers demanded that the city compensate his capital investment as well as the land’s fair market value–amounting to approximately $75 million–the Board of Supervisors voted to claim the land using the legal power of ’eminent domain,’ which permits a government to seize private land without the owner’s consent.

Myers then sued the city, arguing that he was legally “entitled to damages beyond fair market value of the land.”

In late May, a Superior Court judge ruled in his favor, ordering the Transbay group to cease development of the terminal until it corrected an environmental impact report (EIR).

However, it is widely believed among proponents and opponents alike that the project is inevitable. The Board will reconsider the issue later this month.