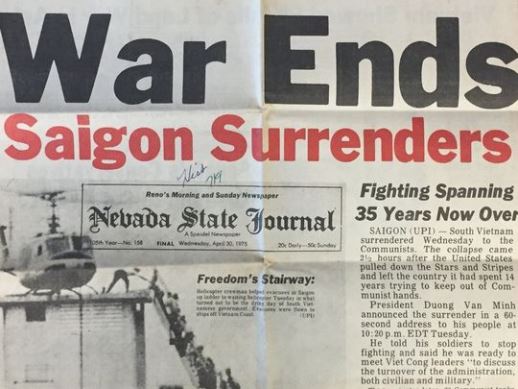 Let us remember the tragedy of this war. 58,000 Americans, and 3.8 million Vietnamese were killed. Countless orphans and widows were left behind.

My family yearned and prayed for peace in our homeland. My mother had not seen her parents and siblings for decades as a result of the war.

Since 1975, we have witnessed the spirit of reconciliation, cooperation, and healing between Viet Nam and the U.S.

Vietnamese Americans have referred to April 30 with different words. Initially, some called it “mat nuoc” (“loss of country”). Others called it “giai phong” (“liberation”) to mark the end of the war. Later, people referred to this date as “ngay thong nhat” (“day of reunification”).  Regardless of the diction used, they remain etched in our memory as an integral part of what it is to be Vietnamese American.

The U.S. government became involved in Viet Nam in the 1950’s and 1960’s due to both a post-colonial period mentality and the pervasive Cold War mentality at that time.

After the Vietnamese defeated the French at Dien Bien Phu in 1954, the Geneva Accords of 1954 divided Viet Nam into two regions, North and South. The Geneva Accords, crafted by superpowers including the U.S., stated that this division would be temporary for two years, Viet Nam would be reunified, and a national election held.

The U.S. government propped up the government of Ngo Dinh Diem. Diem convinced the U.S. government that Ho Chi Minh, who had defeated the French, was a Communist and would take over Viet Nam.  All Diem had to say was the word, “Communist,” and he knew that the American government would react like a knee-jerk reflex.

The American people were misled by their government and Diem, indoctrinated that the U.S. must send economic and military aid to South Viet Nam to defeat Communism, fed the propaganda of the “domino theory”: “If South Viet Nam falls to the ‘Commies,’ the entire region would collapse like ‘dominos.'”

When 1956 arrived, Diem did not allow for a national election and reunification. Diem knew that Ho Chi Minh would win the election.

President Lyndon Johnson deceived the American people with the Gulf of Tonkin Resolution, claiming that North Vietnamese boats had attacked an American destroyer. Congress gave Johnson the authority to escalate the war. Only 2 Senators voted against the Resolution.  There had been no attack.

The U.S. bombing in Viet Nam was four times that of U.S. and British bombing of Germany in World War II. The U.S. unleashed all its armaments on the people of Viet Nam: Napalm, B-52’s, cluster bombs, Agent Orange.

The My Lai Massacre, where American soldiers killed over 500 babies, children, women, and men, was not an isolated incident. Such wonton killing of civilians was not uncommon.  Soldiers were brainwashed that Vietnamese were “gooks,” “dinks.”

Who were the war profiteers? Vietnamese who got rich from the U.S. economic aid and war machinery? Generals fleeing Saigon carrying suitcases loaded with gold?  Nguyen Van Thieu, who reportedly sent gold bars abroad? American weapon manufacturers?  Did President Dwight Eisenhower not warn us about “the military-industrial complex”?

How is the conduct of American foreign policy formulated?

In the invasion of Iraq, what U.S. vested interests were at stake?

Why did we invade a sovereign nation, kill its people, and decimate its infrastructure and land?

What about our invading Afghanistan?

In Syria, we feel repulsed by stories of use of nerve gas. Use of chemical weapons is abhorrent.  It must be condemned.  Where was our revulsion and condemnation regarding napalm and Agent Orange?

Dr. Martin Luther King, Jr., stated that he could no longer remain silent while bearing witness to the slaughter perpetrated on Vietnamese children, women, and men.

I look forward to the day when an American President will visit My Lai to honor all who perished in Viet Nam.

Senator George McGovern, a highly decorated bomber pilot in World War II and an ordained Presbyterian minister who ran for President against Richard Nixon in 1972, stated in 2011, “I don’t know anybody alive today that thinks the war in Viet Nam was a good investment for the U.S. It weakened us militarily, economically, and morally.  When we were carpet bombing a little country like Viet Nam, we went against our moral principles.”

Let us not forget the Viet Nam War. Let us not allow the government to send our young men and women abroad to kill and to be killed.

Let us reclaim our belief in the sanctity of human life. The holocaust of the Vietnam War calls on us to do so.

Anh Lê has worked with the Vietnamese American community in San Francisco and the Bay Area for many years.