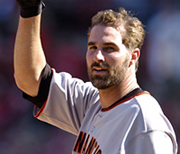 With Giants in the cellar of the NL West and Barry on his last legs, the team faces a defining choice: more of the same, or a new direction. I favor the latter, which is why the first move the Giants should make is trading Matt Morris.

Yep, you heard me right. I know the guy is having a great year. His curveball is back. He breaks all of our losing streaks. He has a 2.56 ERA. But that’s exactly why it’s time to trade Matt Morris.

The Giants are going nowhere fast this year. I’m thrilled as anyone about the solid starting rotation, but once you get past that, there are too many holes to fill: no relievers, no offensive power and too many old guys who could go to the DL at any moment. This is just not going to be the year.

The offense is embarrassing. Please tell me that having Ryan Klesko hit cleanup last week was a joke. The guy has just two dingers all season.

Don’t get me started on Ray Durham hitting in the number five spot. We have no power other than Barry. Giants GM Brian Sabean obviously has an aversion to acquiring players who can actually hit homeruns.

Nobody likes to let go of playoff ambitions this early in the season. But that is how the Giants could build a future championship team. Keep in mind, this is not like other years where the NL West is weak, and we could stay in contention with a mediocre team.

Minor tweaks of our team won’t get us to the playoffs.

This is a great year to focus on building for the future. The fans will keep coming to see Barry break the record, regardless of whether we are in the playoff chase. And with loads of young pitching talent (aside from the obvious ones, I’m optimistic about Sanchez), the future looks bright for the Giants if they will acquire some young power hitters.

We need to acquire young players like Matt Holliday, Ryan Howard, and Miguel Cabrera before they explode onto the scene. Since we can’t seem to do it through our farm system, we need to trade for hitting prospects.

The Giants have a good track record developing young pitchers, but when it comes to offense, it’s an entirely different story. I can’t think of one position player who has come out of the Giants farm system in the last decade who has made a major impact.

As for power, it is not enough year after year to expect an aging Barry Bonds to be the sole power hitter in the lineup. Barry can only carry the team so far, and as he slumps at the plate and becomes a bigger and bigger liability in the field, we are seeing the results of resting the whole offense on one man’s shoulders.

In the long run, I’m not as worried about the bullpen as other Giants fans. We have some young arms that will develop into decent relievers. But the lack of an effective bullpen right now is part of the reason we must give up on this year.

Because even if we mortgaged the team’s future to acquire a power hitter or two now, the team would go nowhere with the current bullpen. Like I said, the Giants have too many holes to fill to be contenders this year.

Morris looks fantastic right now. He will be in high demand, and we will get hitters of value for him. The Giants need to trade him before his numbers come back to earth.

Last year before the all-star break, I said to anyone who would listen that the Giants should trade Jason Schmidt for a power hitter. But the Giants went on a winning streak, the fans smelled victory, and Sabean wasn’t ready to make a tough move.

Instead, he acquired first baseman Shea Hillenbrand from the Toronto Blue Jays in exchange for Jeremy Accardo. Accardo has since become one of the best closers in baseball, while Hillenbrand did little for the Giants. The team limped along until September with nothing to show for the season, and Hillenbrand then moved on after the season.

The Giants have nothing to show for giving up Accardo. Let’s not make the same mistake again.

Trade Morris. Build for the future.

EDITOR’S NOTE: The Giants Curmudgeon hates soggy garlic fries, corporate stadium names and people who leave in the 8th inning. He cannot be reached for comment.