“Too Late to Die Young” 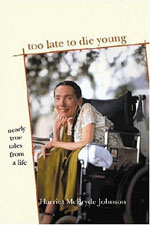 Harriet McBryde Johnson is a political activist, civil rights lawyer, and wheelchair rider whose picture was on the cover on the New York Times Magazine last year and whose essay inside the publication generated significant buzz among the magazine’s readership. Yet while Johnson is an increasingly well known spokesperson for the disability rights community, it would be a shame if her engaging memoir (now available in paperback), is pigeon-holed into the genre of disability studies. Johnson’s mix of personal stories, political insight and tales of one-woman activism — all served up in an easy to read, folksy, Southern style — deserves a wider readership than simply those interested in disability rights.

Johnson, a native and resident of Charleston South Carolina, is, among other things, a civil rights lawyer (and member of the leftist legal organization the National Lawyers Guild), a national disability rights spokesperson, a one-time candidate for Charleston’s County Board of Supervisors, a traveler to Cuba, a journalist, and a guest on national TV talk shows. While all these aspects of Johnson’s life are engagingly described in the eleven essays that comprise this book, the descriptive labels don’t tell the full story.

From the outset, Johnson identifies herself as a story teller in the best southern tradition, and her book is just what the subtitle promises: “nearly true tales from a life.” It is a life that begins, as McBryde Johnson describes it, as “a little girl who knows she will die”. But despite the dire prognoses of pity-seeking fund raisers, Harriet doesn’t die, and now it is “too late to die young.” Quite the opposite: the first forty odd years of her life have been full of adventures, political work, organizing efforts, and personal relationships that make for a compelling memoir.

Johnson describes the nitty gritty of her involvement in campaigns involving several diverse political issues. Her disability – and disability rights political perspective – are part of all these campaigns, but not necessarily the central focus. In one of the more humorous chapters, for example, she describes Ronald Regan’s visit to her Southern university campus in 1983.

Because Johnson’s dorm room was close to the stage where the president was to speak, she was supposed to evacuate the room for “security reasons” during his visit. Her one-woman opposition to the proposed security sweep, and her role in organizing the subsequent campus protest, underscore the importance of each individual in all political struggles. The author’s description of her favorite protest signs from Reagan’s visit – “Ron steals from the Poor and gives to the Military” or “$ave $tudent Loan$ –provide a slice of progressive history and sadly remind us that things haven’t changed much in the past 25 years.

Harriet McBryde Johnson is one of a handful of activists behind a yearly protest of the Jerry Lewis muscular dystrophy telethon. In an example of the candor that permeates the book, Johnson explains that in South Carolina she’s a radical, while amongst the national anti-telethon disability rights activists, she’s holding up the conservative wing.

Comedian Lewis’ annual message of pity and medicalization is the antithesis of the disability rights movements’ core philosophy of civil rights and independence. Johnson recognizes this early on, and in the early 1990’s stages a small public protest in Charleston, South Carolina. Her description of bringing the telethon protest to Charleston (something she has been doing for more than a decade) will bring a smile to the face of activists of all stripes: early on she offered pizza to anyone willing to hold a picket sign on a down town street corner.

The story that propelled Johnson to the cover of the New York Times is aptly titled “Unspeakable Conversations” and appears at the end of the book. (Each chapter of the memoir is independent of the others; the book is really a collection of essays that the reader can sample in whatever order is of interest.) “Unspeakable” seems the perfect adjective for story’s subject: Johnson’s public conversation with Princeton professor Peter Singer.

As she wryly notes in the introductory paragraph of this essay, Singer is “the man who wants me dead.” Not in a direct sense of course, but Singer has staked his career on developing the theoretical underpinnings of a philosophy that boils down to his belief that the disabled life is not worth living – should not, if possible be allowed. Johnson’s meticulous personal, theoretical and political refutation of Singer’s flawed belief system is powerful. Without polemic or name calling, this entire memoir serves as a testament to the inherent outrageous wrongness of Singer’s view.

Too Late to Die Young is one of many books written by disability rights activists and scholars in the last decade that deserve a wide audience. These books, by authors such as Paul Longmore, John Hockenberry and Mary Johnson, to name just a few, may have a disability rights focus and perspective, but contain important political and social insights that no activist can afford to ignore. The universality of the themes in Harriet McBryde Johnson’s memoir, as in many other books in the genre, render these books important reading for anyone interested in a more just and equitable society.