To Take Arms Against a Sea of Troubles: The Story Behind a Crusading San Francisco Homeowner 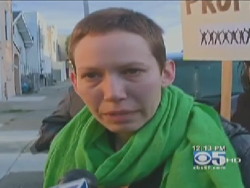 When Monica Kenney received the news that her home was not going to be sold, I was there. I wrote, at the time, “Kenney had received word from Fannie Mae that her eviction had been stayed for two weeks while Wells Fargo, the bank that had originally issued her loan, and Fannie Mae, the apparently wrongful current owner of the home, worked on terms for a rescission.” The atmosphere at the event was celebratory. A page had been turned for Monica Kenney, we all thought.

But in American lives, as F. Scott Fitzgerald said, there are no second acts. The quiet suffering of the people of this country does not end so much as it changes form, or shifts in intensity, until it reaches the only real endpoint, along with the joys, the tribulations, the mistakes, the triumphs, and everything else. Monica Kenney’s struggle did not begin with a sneaky home loan from Wells Fargo, and it did not end with a two-week stay of her eviction. Of course not.

But the names we read about in the news, the faces on TV, they drift in and out of our minds and those moments of living publicly are, for all we know, the sum total of those people’s lives. That’s why I sat down in a diner to have coffee with Monica. Not to put a human face on the housing crisis, or to put a name to the face. To witness a human experience, one which shaped and was shaped by the housing crisis, the economy, unemployment, the decay of the social safety net, shifting family models, and everything else that Americans have been living with and living through for the last fifty years.

She was born into the working class, and she grew up a Bay Area rebel. She lived dangerously and exuberantly, rejecting the order that she had been given to live by. Life was difficult from an early age – she was in two separate automobile accidents before the age of nine, and suffered another major injury from a fall before she could even walk. Her parents, never married, parted ways when she was very young. It all added up to a childhood of watching everybody else around her, whether it was her parents or the cab driver who hit her with his taxi and dragged her several blocks, not appearing to play by the rules she was expected to follow.

She ran away from her mother at 15 before reconnecting with her father, but her teenaged years were troubled no matter who she went home to. She moved out of her father’s house on her 18th birthday. She says she’ll never forget his words: “You’ll be back in a month. You’ll never make it on your own.” Because she had so studiously rejected the well-worn pathways that her authority figures tried to usher her down, Monica may not have had the tools to deal with adulthood. But she had the passion and the strength of will to make a pretty good go of it.

She used her structured payout monies, awarded to her in the settlement over the taxi accident, to pay for three months’ rent and a security deposit on an apartment. The payouts were not the full settlement, though. They were periodical. Eventually, she found herself without enough money, waiting for the next payout check. Monica wound up serving seven years in prison for robbing a 7-11 and a Round Table Pizza to pay rent. For a time, prison only made things worse, as it tends to do. She tried drugs, got in fights, spent time in solitary confinement. But prison also provided her with an opportunity to do things a different way upon her release. She took a welding course, and when she was paroled, she went to work as a welder. She met her husband on the job, and they were married soon after.

Whatever else he may or may not have been, Monica’s ex-husband wasn’t good with money. He pillaged her savings and retirement accounts, and saddled her with thousands of dollars in debt by the time she divorced him five years later, leaving behind the home they’d bought in Castro Valley. She came home to San Francisco, and a couple months after moving back, she reached a milestone. For the first time in her life, she – alone, without a husband, a partner, or a friend – bought a home. Not for the first time, and not for the last time, she believed that the series of tragedies wrought by her tough childhood was finished. She’d grown up. She’d done her time and paid her penance for the mistakes she’d made. She was on the straight and narrow, doing the things you’re supposed to do, the things they tell you will allow you to live comfortably as a proud, independent American.

But that’s never been enough to stop the great gears of society from grinding people up. Monica’s troubles began again when complications from working in a wastewater treatment plant, a job she’d gotten years ago, during her marriage, sent her into the hospital with a tonsillectomy. Not long afterward, she began having difficulty making her mortgage payments, and received a loan modification dropping them from $2,700 to $24,00 per month. These issues began weighing on her mind, affecting her mood at work. When she took a leave of absence to travel to Washington, D.C. in January of 2010, she was brought back to work under the strictest of expectations.

That’s when it all snowballed. You make a couple mistakes, have a misunderstanding or two, and before you know it the interconnected web of the modern American way of life has completely unraveled. She was fired from work for being five minutes late. Her dog was hit and killed by a car in front of her house. And Monica Kenney, after 33 years of finding her own way to swim in a sea of troubles, finally broke down. She shaved her head. She burned her dog’s belongings over the stove and laid the animal to rest with what was left of them in the backyard. Her roommate, disturbed by what was going on, called the police, who arrested her for arson and animal cruelty.

Fast forward to her release from a mental hospital a month later – a month during which she had difficulty moving, couldn’t speak, and drooled constantly due to her mandatory injection of Haldol, a strong psychotropic. She returned home to find that she’d been robbed by her roommate of several high-value possessions and about $6,000, some of which was later recovered.

Monica regained employment not long after, but the blows just kept on coming. As she came to the end of her training period, her house was ransacked and robbed again. She broke down again, was hospitalized again, and was let go from her job again. And all the while, she was still struggling to make the onerous $2,400 payments on her home. Since her troubles began, Monica had been trying to get some relief from the bank, speaking with several different people at Wells Fargo. She never spoke to anyone about foreclosure because Wells Fargo’s representatives assured her that it would not happen. They told her a solution would be found. There’s something about an official answer, from a paid representative of a company, that just feels like it ought to be basically reliable, and Monica believed them.

They lied. In May of last year, she was told that her house would be sold in June. She worked feverishly to reach a solution with the bank, and finally she had one. A forbearance agreement, basically giving her a much lower monthly payment until her financial situation had stabilized, was approved on June 27th. She made her first payment immediately. The next day, her house was sold to Fannie Mae.

It’s called “dual-tracking” by activists who want the practice ended. A bank works with a consumer on forbearance or loan modification, all the while actively pursuing foreclosure. It saves them time if things become unworkable with the consumer, but it also frequently means that the consumer gets blindsided like Monica did. The foreclosure people and the loan modification people do not, apparently, communicate much. “A couple of phone calls between people at Wells Fargo could have stopped this,” Monica said to me.

That’s when Monica was approached by the Alliance of Californians for Community Empowerment. Activists from ACCE, particularly Erin Franey, helped Monica pursue every possible option, facilitating many of them with loud public protests at bank branches and offices. For a while, not much changed. Monica’s family, initially unsupportive, came around to protecting her and helping her as best they could when they saw how hard she was fighting, and when they realized that this wasn’t the Monica they’d assumed they’d known for all those years. This wasn’t some cantankerous, rebellious, wild-eyed youngster, but a strong-willed, determined fighter who’d been given many sets of rules by the world but never enough guidance on how to use them, a warrior demanding a livable, reasonable life. They pitched in to pay for a stay of eviction.

The second eviction, I was there for. That was in February. Intervention from the office of Nancy Pelosi, and the efforts of activists and neighbors, brought about a two-week stay of execution. Monica was told to make her forbearance payments for five months, beginning in May, as a good-faith first step in a resolution to the situation. After that, she needs to show that she’s permanently employed – she currently works in a temp position that may eventually become permanent – and that she can make modified loan payments. She doesn’t know what those payments will be, nor does she know if Wells Fargo will even let her make such payments. They’ve made no promises, and her allies at ACCE don’t have any idea how this will turn out. Like so many cases in this housing crisis, this situation doesn’t have any precedents to look back to.

In the face of uncertainty, Monica’s continuing to do what she’s always done. She’s making her own way in a world that tells you not to do that but doesn’t reward you for playing the game it wants you to play. And although she doesn’t believe that activism is her ultimate calling in life, she knows that her example, and the publicity of her situation, are important. “I want to let people know,” she told me in the diner, “that just talking about this allows there to be change. It’s about communicating with one another in order further our goals and desires. That’s how we can get through this, get to a better place.” Monica’s been fighting to get to a better place for her entire life. That’s what most of us do. We might not ever get there, or we might not get there for decades, but you can’t do much else but keep trying.