To Ideological Terrorists: “Quit Makin’ It Up” – Can Loose Lips Sink Majority Shifts? 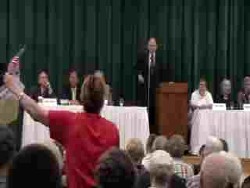 Why does the rightwing fringe churn so much nonsense? If we didn’t have North Korea or Iran, nothing would compete in hilarity with birthers, deathers, teabaggers and dittoheads. What screamers at “town mauls” broadcast is how many cranks need therapy – or intervention.

Should we write off anti-democratic, unruly designer mobs as only a troublesome minority? Or view today’s hate speech and shock troops as the new measure for demagoguery, the poisoned politics of prejudice that jeers at rationality? Already, rightwingers brag about guns and violence, muttering secession and insurrection; gun sales booming since Obama’s election persist, intimating bloodshed beyond boorishness.

Democracy fails without some civility and agreement on facts. Both are sabotaged when extremists willfully distort what are already watered down, industry-friendly health proposals as children killers, per Sarah Palin’s fantasy “death panels.” What’s next after comparing Obama with Hitler or Democrats with Nazis, the latest venom from Rush Limbaugh? Hate speech spurs anti-social aggression, a pretext for those who don’t need much to create havoc, especially against a perceived tyrant or anti-Christ.

The Bullying of America

Likewise, Sarah Palin (R-nowhere) hit new lows by falsely vilifying routine medical oversight panels: “The America I know and love is not one in which my parents or my baby with Down Syndrome will have to stand in front of Obama’s “death panel” so his bureaucrats can decide, based on a subjective judgment of their “level of productivity in society,” whether they are worthy of health care.” Talk about “making it up” – lying – as Congressional proposals mention only voluntary counseling on living wills and end-of-life care. Sen. McCain, hang your head: Palin is beyond shame.

Willful ignorance spreads beyond those who don’t think, or populate FOX News. CNN showcased top Reagan economist, Art Laffer, but never challenged this whopper, “If you like the Post Office & the Department of Motor Vehicles, just wait till you see Medicare & Medicaid done by the government.” Say what? DMVs are state-run, the well-liked Post Office was privatized years ago, and Medicare is government at its low-complaint, low-overhead best. Is this derangement or calculated misinformation?

Nor is the liberal media immune from parroting nativist idiocy, per MSNBC’s Hardball:

Chris Matthews: Do you think Global Warming is a hoax?

Buchanan: No, it does, of course it exists. The idea we’re all gonna die of this is utter nonsense. It’s a power transfer to governments here, and governments abroad.

Matthews: And the motivation is what?

Buchanan: And the motivation is power. It always is in government.

Matthews: So people like Al Gore have cooked this up to get what?

Buchanan: No, I think he believes it, Chris, like the Birthers believe it. He’s just like they are. It’s a religious belief with them.

Equally unchallenged, Buchanan gives permission to the prejudiced to cultivate ignorance and rage. The sequence is breathtaking: man-made warming is a “hoax” (not just wrong), justifying his fear-mongering lie (“we’re all gonna die”), then upside-down logic: the problem isn’t the cause (industrialism) but the effect (fixes by now power-mad governments). Finally, heroic Al Gore, delinked from government, gets slammed as naïve nitwit, equal to birthers, the ultimate crazies. A terrorist, media ambush, in my book.

The Enemy Invasion Next Door

What distinguishes today’s rightwing frenzy from post-WWII anxiety is not the size of the threat but the multiplicity and nearness of enemies. Through the ‘60’s, one monolithic enemy loomed, as the “Red Menace” unified Americans left and right, rich or poor, Soviet Communism, godless and totalitarian – and loaded with nukes. Today, the right shudders not only against real-world terrorists, but whatever made-up threats address “white nationalism:” cultural, racial, and ethnic diversity, feminists, atheists, gays, secularists, Hollywood, nefarious socialists under every rock – and a rainbow president who apparently can’t decide where to be born. The hysterical over-reaction goes beyond public tantrums, to the burning of effigies and death threats. For many, this incipient fascism, by zealots who own all truth, emanating from God or Limbaugh or Beck, poisons compromise as blasphemy.

“If you disagree with these religious groups on a particular moral issue, they complain, they threaten you with a loss of money or votes or both . . . [no group] has some God-granted right to control my vote on every roll call in the Senate . . . I will fight them . . . if they try to dictate their moral convictions to all Americans in the name of “conservatism.”

Sara Robinson (“Is the U.S. on the Brink of Fascism?”) also invokes absolutism to explain how rightwing, Republican shock troops jeopardize freedom and democracy:

Lacking legitimate routes back to power, their last hope is to invest the hardcore remainder of their base with an undeserved legitimacy, recruit them as shock troops, and overthrow American democracy by force. If they can’t win elections or policy fights, they’re more than willing to take it to the streets, and seize power by bullying Americans into silence and complicity.

Violent extremists are emboldened by frenzied terrorists, whether well-organized mobs or media voices who disgorge propaganda, mass delusions, even provocations to riot. We are a violent culture, packed to the teeth with guns, and millions are jobless and impoverished, desperate for simplistic solutions. It’s a high-risk concoction the rightwing is stirring with fear-based strategies. The result is the veneer of civilization looks thinner than usual these days.