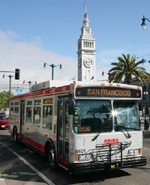 The MTA gave its Citizens’ Advisory Committee a look at the proposed changes to the city’s public transportation Wednesday night, some of which are fairly drastic and sure to raise controversy. Fear not! You have a season of public meetings ahead of you to put in your complaints or compliments.

There are, essentially, four proposals to examine. There is the “restrained system,” which uses existing resources for changes. Within the restrained system, some lines are noted as “A” and “B,” which are two suggestions for one line. I’m told all A and B options focus on 24th Street. So, for example, the 24 may be re-routed on to 24th Street. Or it may not. Then there is the “enhanced system,” which would require more funding.

The absolute earliest implementation would be July 2009, but that must follow public comment and an environmental impact review, the scope of which has yet to be decided.

The hope is that efforts already underway to improve on-time service will garner confidence in the system and attract more riders. As we’ve been told before, slowed service is not only inconvenient to riders but also costs more. Service has slowed 10 percent in the last ten years, raising operating costs by 10 percent.

The proposed service changes add 200 service hours to MUNI runs, but a handful of routes will be discontinued: 3, 4, 7, 20, 26, 56 and 66. Other routes will pick up some of the lost segments. For example, the 36 Teresita will pick up some segments of the 26 Valencia. It will also be re-routed from Forest Hill to Glen Park BART and the Mission.

The plan includes more limited lines running all day, especially along the Van Ness and Mission corridors. Other changes divide route segments. For example, the 5 Fulton will run local stops west to 6th Avenue, then have both local and limited service from there to the Civic Center.

See the document entitled Draft Proposals to Transform MUNI pages 7 and 8 to get an overview of the proposed changes.

In the near term, the agency is looking at generic speed improvements on four route segments, starting with the downtown Mission corridor. This and other routes in the newly created Rapid Routes category will have the highest level of supervision. If the changes go through, they will make supervision more efficient. For example, the 49 and 47, both busy Van Ness lines, will have the same northern terminus, where a supervisor could watch both lines.

MUNI has already started hiring more schedulers, a key component to on-time service, and will hire more. The last class of drivers had double the number of students (30) than previous classes, though this is not enough to fill the 150-operator gap that exists. Newly hired assistant supervisors have freed up time for supervisors to develop better relations with drivers, more closely examine absenteeism and focus on drivers who’ve accumulated many customer complaints.

The agency also intends to track police enforcement of double-parking and cars in the bus lane, which are big barriers to on-time service. Parking control officers are part of MUNI’s parent organization, the Municipal Transportation Agency, and the MUNI folks are working to get them to focus more on traffic violations that slow the buses.

Finally, NextMuni does more than just tell you when the next bus will come, a system that has yet to be perfected, I’m told. Schedulers and supervisors can track buses using the system, and that is hoped to lead to better service.

Some of this money comes from Proposition A. Still, the agency hopes to see savings from improved reliability as well as a positive response to a plea for more money. As the money comes in, MUNI has built certain capital and operating improvements with each cash influx. So, for example, you won’t see the longed for “bus bulbs” that allow buses to maintain their places in a lane of traffic while providing more room for passengers waiting any time soon. However, you will see special traffic signals that communicate with buses to give them priority.

Additionally, MUNI is asking for money to create a team of traffic engineers, drivers, parking control officers and route managers to find the easiest fixes as well as to look at long-term fixes. A revenue panel is making its recommendations today for increased funding, looking at higher fares and fees, cost-savings efficiencies and potential public funding.

You will notice there are no proposals yet for stop consolidation. Those are in the works. MUNI is looking at “best practices” from other cities; it is making assumptions including all-door boarding to determine the best stops; and it seeks to improve stop placement for a five percent increase in speed. This would involve putting stops before stop signs rather than after and putting other stops after lights rather than before them.

The plan is only a draft and will undoubtedly change following at least six citywide meetings, the first of which will be on March 27. The rest are yet to be planned. The MTA Board will review the changes starting in May or June of 2008 and will hopefully approve the recommendations in concept. An official approval must await the environmental assessment, which is estimated to take about a year.

You can view the proposed changes at www.sftep.com. The website has an online format to submit complaints or compliments, or you can also attend the meetings. Of course, you can always email me comments. I will take them to the next CAC meeting.