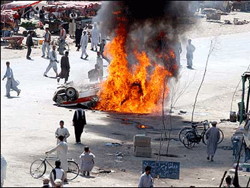 Cultural insensitivity of the kind illustrated by the recent Koran burnings at Bagram Air Base might be an understandable lapse in the first months of a military occupation, but after ten years? It wasn’t long ago when General David Petraeus asked a good Reverend in Florida intent on holding a “Koran Burning Day” to cancel the event because it would make life more difficult for his soldiers in Afghanistan. Now the situation has been made far worse because the Koran burnings were done at an air base on Afghan soil where the U.S. jurisdiction is already under dispute.

The callousness is astonishing, especially from a power claiming to be altruistically setting Afghan society on the path toward modernization and democracy. But to burn these books right in front of Afghan “friendlies?” No “apology” will suffice, nor will bland promises of greater training in “the proper handling of religious materials.” The episode points to a much bigger disconnect.

Since the war will be “won” or “lost” based on the success or failure of the pro-Western political structures that are left behind, any incident that triggers widespread anti-American unrest cuts directly against the core mission. Nearly eight years after photographs went viral of a female American soldier holding a naked Iraqi man on a dog leash at Abu Ghraib photos surface from Afghanistan of U.S. soldiers urinating on dead bodies. The recent report by Lt. Col. Daniel Davis, after serving two tours in Afghanistan and extensively interviewing soldiers in the field all over the country, is a testimony to the fact that there are simply very few “hearts and minds” to “win” anymore. So much for “three cups of tea.”

Even the Afghans who are among the most loyal to the Americans are outraged. President Hamid Karzai has little choice but to make a show of demanding those responsible for the Koran burnings to be held accountable. Karzai’s security services have killed dozens of protesters in recent days, which further corrodes the slender degree of support for his U.S.-backed government. At about $10 billion a month, and an increasing number of American casualties in an environment more volatile than ever, the American people need to take long, close look at whether staying in Afghanistan until December 2014 is worth it.

One thing that is sure to unite the Sunnis and the Shia is the spectacle of foreign “infidels” occupying a Muslim country burning their holy book. You can bet that the Iranian intelligence services are having a field day fanning the flames of resentment in Afghanistan at the American military.

Attacks against American and NATO soldiers from supposedly “friendly” Afghans within the security forces reminds one of the same kind of failures during the Vietnam era of the Army of the Republic of Vietnam (ARVN). Like the Afghan National Army and police, the ARVN was not only a sieve of intelligence and a source of personal enrichment and corruption for well-connected officers, but also a safe harbor for U.S. enemies posing as “allies.”

The shootings of the two U.S. officers by Afghan soldiers (shot in the back of the head at close range) inside one of the most heavily protected and tightly secured areas of the Interior Ministry is reminiscent of the January 1968 executions of MPs inside the U.S. embassy in Saigon on the eve of the Tet Offensive. At least back then we had Walter Cronkite tell a TV audience of millions 44 years ago today: “The only rational way out . . . will be to negotiate, not as victors, but as honorable people who lived up to their pledge to defend democracy, and did the best they could.”

Afghan children still freeze to death every winter inside the refugee camps ringing Kabul, and (despite what Lara Logan says) enlarging and maintaining war zones are never a good thing for furthering the rights of women. I always thought that the quadrupling of opium production in Afghanistan that has taken place since the October 2001 U.S. invasion was a strange indicator of where things were heading. How can the U.S./NATO military succeed in its stated mission with an unpopular, weak, and corrupt government in Kabul? The other nations are already pulling their soldiers out; it’s long past the time for the United States to leave too.

Defense Secretary Leon Panetta (thankfully) is not a belligerent megalomaniac like Donald Rumsfeld, but he should show the same kind of courage that Colonel Davis has shown and tell the American people the truth about Afghanistan. If Dwight Eisenhower could accept a stalemate in Korea that was far from the United States’ maximal goals, and Richard Nixon could sign a deal with Vietnam that allowed American forces to extricate themselves even while the Saigon government was as precarious as ever, Barack Obama can move the troops out of Afghanistan much faster than on the timeline of December 2014. We’ve reached our Pogo moment: We have met the enemy and he is us.

This piece was first published at L.A. Progressive.