Time for Activists to Mobilize Behind Obama’s Progressive Agenda 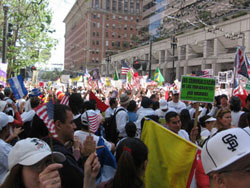 Four years ago, activists who had worked day and night for months to elect Barack Obama returned to their regular lives and waited for the new President to implement Change. We know how that turned out. Activists now must write a new script for the post-2012 election by pushing the President to keep his progressive campaign commitments on taxes, the budget, and, most urgently, comprehensive immigration reform, where the time for action is now. Obama is already saying the right things on these core issues, yet many have doubts about his future actions. This makes it imperative for labor unions, MoveOn, Daily Kos and all the other activists, groups, and websites that helped re-elect Obama to continue mobilizing voters behind their own and the President’s progressive campaign agenda.

It is rare that activists get a chance to revisit past mistakes. But President Obama’s second term gives his core base the opportunity to make up for acting too passively in 2009, and to now continue pressuring the President as if the campaign to sway voters was still going.

We’ve already heard a lot about Obama’s electoral mandate, but the activists who supported him also have a mandate: to get the president’s strong support for the issues that activists promoted during the campaign. This means activists should not wait for the President to decide what he wants to do and what deals with Republicans he wants to make; rather, it means that the activist base must begin pushing to make implementing their mandate a political necessity.

The most obvious area is the imminent “fiscal cliff” budget and tax deal. This has to be among the most brilliant framing devices ever for creating a completely artificial deadline, as the only “cliff” that occurs at the end of 2012 is psychological. All of the economic impacts are gradual, which means the nation really faces a “fiscal hill” or “slope.”

How Obama handles the fiscal cliff will set the tone for the rest of his presidency. It will send a message whether the president has learned from his past negotiating errors, or remains too obsessed with “bipartisanship” to show tough leadership.

I find it striking that even the most fervent Obama supporters I know cannot say with confidence that the President will stay firm on the upcoming tax and budget deal. That makes it imperative that activists who promoted Obama’s pledges to raise taxes on the wealthy and create a more equitable tax system mobilize behind their mandate for implementing these policies.

I wrote on September 18, 2012 “by attacking Latino immigrants and opposing reform the Republican Party has foreclosed its chances of winning the White House in 2012 and beyond.” I earlier argued, “changing this future requires Republicans to return to their pre-2008 position of supporting some version of immigration reform that includes a path to legalization and citizenship for all of the $8-12 million affected.” This can happen despite grassroots opposition because “neither Wall Street nor the billionaire funders of the GOP care about this issue.”

This is the moment for enacting comprehensive immigration reform. Now. Not in the summer, not before the next elections, but as soon as the new Congress is seated and bills can be introduced, debated and passed.

When Sean Hannity publicly announces support for a path to citizenship for undocumented immigrants as he did last week, saying that his position on comprehensive immigration reform has “evolved,” its time to strike while the iron is hot. While Senators Schumer and Graham then announced a bipartisan plan to move on such a measure, this is not going to happen unless the Latino voting base and supporters of reform are mobilized on this issue.

In other words, we will not see an historic victory on immigration reform early next year if activists across the nation are watching Beltway folks negotiate a deal. This has to be treated like an election campaign, with rallies, marches, and even door to door canvassing in key House districts (the votes are there in the Senate if filibuster reform passes, which appears likely. This puts the onus on winning enough Republicans in the House).

President Obama sees passing comprehensive immigration reform now as a far higher priority than at any other time of his presidency. He fervently wants to reward the Latino voters who re-elected him by getting it done, which was certainly not his feeling in 2009 or 2010.

Can immigration reform activists reach sufficient agreement on legislation that avoids the internal conflicts of the past? If the base is mobilized and demanding action, they will have no choice.

For the record, while the media has been contrasting the Republican Party’s anti-immigrant stance in 2012 with the allegedly “pro-comprehensive reform” position of former President George W. Bush, Bush applauded the passage of the Sensenbrenner bill in December 2005 that made it a federal crime to be in the country illegally and to even help an undocumented immigrant. Bush’s notion of “immigration reform” by 2005 had already moved sharply rightward from his position when seeking Latino votes in 2000 and 2004, and was consistent with Republican Party’s overall shift.

Activists may feel they need a long break after the tiring election season, but now is the time to cash in our winner’s chips. As we learned by the summer of 2009, even big national election victories can prove fleeting absent grassroots mobilizing to keep the momentum.

Randy Shaw is Editor of Beyond Chron. He is the author of The Activist’s Handbook and Beyond the Fields: Cesar Chavez, the UFW and the Struggle for Justice in the 21st Century.