Thrill Me at NCTC – Brilliant! “The Green Witch is back”; Gossip Boy; ‘Airwaves Exchange’ 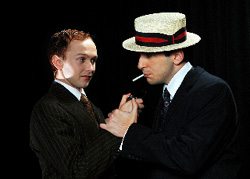 THRILL ME – RICH KIDS KILL FOR THE THRILL

It was the crime that shook the mid 20’s. Two rich kids, Richard Loeb and Nathan Leopold were smart. They were going to be Lawyers when they got out of college and then they became killers. So much, for the Lawyer plan. They now needed a Lawyer.

The dialogue is stirring and frightening along with the mesmerizing musical score that is almost operatic. The music increases the plays depth as the two men declare their love for each other. They even go so far as to cut themselves so that they can sign their undying love for each other in blood. Don’t worry – you won’t feel sorry for these guys. They start out by stealing things for the “Thrill” and one day, Richard Loeb (William Giammona) says that he is bored and hatches up a scheme to kill a young man who they don’t even know.

Ricardo Rust plays Nathan Leopold, who is so charmed by his friend Richard that he would and does anything to please him. Richard holds off the promise of sex, until Nathan agrees to do what he wants. Like, help kill an innocent person.

There are a lot of mind games going on in the play. Giammona perfectly portrays Richard’s complicated personality and his relentless addiction to Nietzsche’s superman theories.

Stephan Dolginoff, who wrote the book, music & lyrics, is the master that gives his play seamless tight construction. The shows sung-lyrics, emphasis the tragedy that is building right before our eyes. Voices are very important to this show – and though both actors did a good job, I think that Ricardo Rust’s voice sounded a little more musically trained.

The play starts out in 1958. It is a parole hearing for Nathan Leopold. From that point everything pretty much is told in flashback to 1924. Beginning with the murder and ending in the jail.

There is one really, really creepy segment when Richard Loeb charms and seduces a 14-year-old boy into his Roadster, to kill him. The scene is monstrously thrilling …at least to Loeb. To us – it rattled our bones.

“Thrill Me” is an absolute triumph. It’s a strange mix of caution and Lust mixed with a musical score that reminded me of Sondheim’s ‘Passion’. And that’s not a bad thing.

Director Dennis M. Lickteig knows how to push all the buttons in this captivating drama. The musical director /Accompanist was terrific. However, if I have one little complaint it is this: I would like to see the show done with a synthesizer. By adding some additional instruments – it would really enhance the musical aspects of the show. The costumes by Jessie Amoroso hit the time period ‘right on’. John Kelly’s lighting was amazing and cinematic.

These two guys, Ricardo Rust and William Giammona both give soaring, memorable performances in this captivating story.

“Thrill Me, Thrill Me, Hold me, Hold me — Never let me go. Walk me down the lane where shadows will be.” – Lyrics from song “Thrill Me”.

AT THE NEW CONSERVATORY THEATRE CENTER

RE: ALL ABOUT LEE

We have talked to Warner Brothers, Universal, Columbia, Paramount, and MGM. It looks like it will be a combination. Your life story is just too BIG for one studio (and expensive). Since you’ve lived in London, Paris, Rome, Brooklyn, Chicago, Milpitas, Bombay and San Francisco, the camera units will have to spread around the world, of course at the greatest luxury hotels, palaces, castles, Motel 6’s and tenements. Your story is too fantastic. We thought we would open the film in Florence, Italy where you were born and then do your childhood in Bombay, where you were brought up by Mother Theresa, to be played by Anne Bancroft. You were then adopted by Lord Bamberstroke of Devonshire, to be played by Ian McKelland and his wife Vanessa Redgrave. You were then put in that terrible boarding school in Geneva, Switzerland, where you were beaten by the headmaster, (among other things???) to be played by Kenneth Brannagh. You composed your cantata as a young man in the Himalayas, in the Sun – Sun Monastery where you were befriended, by a Zen Buddhist priest. You made your way to the teeming slums of Williamsburg, Brooklyn where your landlord, to be played by Al Pacino, had you gun running in Jamaica, under the tutelage of Harry Belafonte. Of course, this will provide a large musical number, like the good old days, where you will do your bucket dance. Actually, the studio said your name was not big enough. They have mentioned several candidates including Arnold Schwarzenegger, Matthew Broderick or Danny DeVito. If the studio leaves a Rolls Royce at your doorstep, and $500.000, you are to refuse. We can get you a better offer. Yours Very truly, Melanzina Dos Passos, Talent Agent, 7000 Wilshire Blvd, Los Angeles, CA.

Wow! Thank you. I guess that’s why, at my local Starbucks, they think my middle name is “Extra Hot!” One thing though – isn’t Anne Bancroft dead? Maybe you can get someone that’s alive.

Dear Buzzin: I know that this is probably out of your format, but I have noticed that you write with a left hand, so I thought this would be of interest to you. You, and your left-handed friends can meet Oakland “A’s” pitcher Lenny DiNardo. He throws left-handed, bats left-handed, and signs autographs left-handed. He will be at the Lawrence Hall of Science, UC Berkeley. Check it out at www.lawrencehallofscience.org. Lenny will be at the SPEED exhibit 12 noon Saturday on May 3. Free for children 2 years old. — Mr. Science.

Yes, I am a Leftie, or as I like to tell everyone – another genius. Thanks for the tip Mr. Science.

GOSSIP BOY: There is one scene in the new Batman film that is perplexing the Studio. That scene in question shows Heath Ledger’s character, the Joker playing dead inside a body bag. Some people that saw an advance screening – were horrified – now that ledger is dead, and as shown on T.V being taken out in a Body Bag. Will it be cut or not? I wonder what your readers think. I think it should be cut. Also, I would like to mention a blind item in the Daily Mirror “Who is that English actress who does not want to be seen in places with the common people. She seems to have this entitlement about her.” My guess is that it is Elizabeth Hurley. But, I’m NOT sure that she’s an actress. – Gossip Boy.

O.K. Gossip Boy, lets ask our readers. Send your vote or comment to leehartgraveshow@yahoo.com. What do you think? Leave the scene in, or not. And do you know who the actress is?

A scene from the musical Wicked coming back to San Francisco.

LOS ANGELES: It didn’t win a Tony Award, but it has been Broadway’s highest grossing shows for four years. And, there are four American companies, including two long running shows in New York and Los Angeles. “Wicked”, the musical actually got its start in San Francisco at the Orpheum Theatre (Previewed at the Curran) in 2005. The Los Angeles Company will come back to San Francisco for an open-ended run at the Orpheum in January. I just wanted you to know. I’ve seen the show seven times and can’t wait to see it again. – Just another Green Witch.

Dear Green Witch: Gee, this is the first time that I’ve actually heard from an actual Green Witch. How thrilling. I did know that it was coming back – and was holding back to announce it closer to the date. But, I can still do that. Green is good for everyone in San Francisco. Lots of Greenbacks, for the show and Lots of Green Masks, at Halloween. By the way – “Twisted Sister” sent something similar, and says this about the show. “It’s the one percent who won’t get it that scare the Hell out of me!