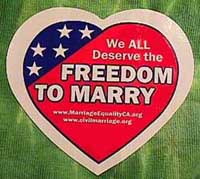 Ed. Note: This piece was first published at the blog Box Turtle Bulletin. It raises many insightful points about upcoming battles in Maine and California.

The respected analyst Nate Silver has a major piece at the New York Times’ blog about the prospects for marriage bans if they were brought up today on the ballot. It’s worth a read. He uses two models based on public opinion polls, and based on those models, he says that in Maine, where LGBT advocates have announced a drive to place marriage equality back on the ballot for 2012, voters are predicted to approve same-sex marriage just three years after rejecting it by about six percentage points. But it’s worth recalling that in 2009, Silver also thought the ban on same-sex marriage would fail:

When we last discussed this model, it gave Maine’s Question 1 — which reversed the State Legislature’s decision to provide for same-sex marriage — a 3-in-4 chance of being defeated. In fact, the measure won and same-sex marriage was repealed in Maine, although the results were close and within the model’s margin of error. (There’s more discussion of the Maine result here.)

He’s done a lot of tweaks to his model since then, and he now believes that Maine — and California — would have a shot at overturning their marriage bans. According to Nate’s analysis, Maine has a better prospect of overturning its ban than California does. But the one thing that his model cannot predict is the effectiveness of the two particular campaigns — the pro-equality and anti-gay sides — to shape the messages and motivate voters who are much more interested in other things. And the other thing to keep in mind, is that this is only a model. Models can only try to predict the future, about the same way your local meteorologist tries to predict the future, using very sophisticated computer models based on weather patterns. There still remains that nasty margin of error, and Silver doesn’t disclose the possible impacts of that error.

But even if the models were perfect, it’s still up to the campaigns themselves to turn those predictions into reality. And as I mentioned before, it’s worth raising the questions of what kind of a campaign they intend to run this time around. I’m sure Maine’s LGBT advocates have learned quite a few lessons since 2009, but if they are relying on the perception that they’ve changed a lot of minds in their door-to-door grassroots campaigns since then, then I worry that we are setting ourselves up for a very expensive fall again.

Don’t get me wrong. I wholeheartedly support every LGBT American who is willing to stand up and fight for our rights. Maine has my complete support. But I think that a key part of supporting a campaign is the ask the hard questions, particularly where we’ve seen mistakes before. And the biggest mistakes we have made in the past, we’ve made repeatedly, not just in Maine.

Mistakes is a loaded word, so let me clarify further: in raising these issues, it’s not my intention to question the commitment or competence of those who ran past campaigns. They worked their hearts out, and did the best jobs they could possibly do with the information they had at that time. The mistakes that were made were not, I believe, a reflection of their competence — when those mistakes are made the first time. But if they are repeated again, then it will truly be the case that we only have ourselves to blame.

Having said that, I think the mistakes we made in the past centered on three critical questions we failed to ask.

Question 1: What do voters really care about?

Here’s the first hint: It’s not same-sex marriage. Frank Schubert, who ran the Maine’s 2009 anti-gay campaign as well as the California’s pro-Prop 8 campaign recognized that fact early on. As former U.S. House Speaker Tip O’Niel famously said, all politics are local. Schubert recognized that politics aren’t just local, but personal. It hinges on the question, “How will this affect me?” Karen Ocamb’s brilliant analysis of the California campaign, which should be mandatory reading for everyone, describes very carefully how Schubert came to this conclusion:

During the Prop 8 Case Study workshop, Schubert said he, Flint and their team spent hours “looking at where people were and what we needed to do to reach them.”

What they found was that most Californians were very tolerant of same sex relationships. Schubert said:

Karen wrote that analysis in 2009 as a warning to Maine, a warning that was not heeded. I still think her analysis is just as germane today as it was two years ago. If we really want to win these battles, we need to begin with an understanding of this important but uncomfortable truth: Nobody cares about same-sex marriage.

Yes, I exaggerate. Everyone has an opinion about same-sex marriage. But nobody cares about it in the personally imperative sense simply because it is something that just doesn’t affect them. A lot of people care about global warming, but we’re not exactly seeing hybrid and electric cars flying off the dealers’ lots or solar panels sprouting on rooftops.

When people go to the polls, we cannot expect them to base their vote on altruism. People vote on how an issue affects them personally. And until we make the issue about something they have a personal stake in rather than a relatively abstract notion of fairness and equality (both are politically meaningless concepts: even bigots think they’re fair and open-minded), we’re not going to really get their attention.

Question 2: What do voters really care about?

What the research showed was that we could not win by simply affirming traditional marriage. People said, ‘Yeah, OK – but what’s the problem here. How does this impact me?’…. This forced acceptance [by the court] that gay marriage was now mandatory was a big deal – the consequences – specifically regarding religious freedom, religious expression and teaching of gay marriage in schools – and the education consequences become the most powerful in the course of the campaign.

We bet the campaign on consequences – especially on education. Education from the beginning – while it was one of three consequences – it was the one that was the most emotionally charged and the most powerful. And I remember testing an ad in focus groups in Southern California….[One ad was} with the Wirthlin couple from Massachusetts. She’s telling the story of her son Joey – about he’s being taught how a prince can marry another prince – and he’s in second grade.

There’s an African American gentleman in this group watching the ad [who] just shakes his head. So I [told the researcher to] ask him what he meant. And the guy says, ‘I’ll tell you what, if that happened to me – I would be pissed.’

And that was the moment that we decided that the campaign would rely on education.

Nate Silver’s models are based on whether people want to ban same-sex marriage. But it asks the wrong question. If he had asked whether schools want to “teach homosexuality in the schools,” he would get a very different answer. That’s why Schubert changed the question in voters’ minds.

Question 3: What do voters really care about?

Voters care about a lot of things. They care about jobs, taxes, the economy, education (still), foreign wars, immigration — all kinds of things. They don’t care about equality because too many of them think that we have it already through other means. And they don’t get motivated by being preached to about fairness because they think they are already fair. Campaigns aren’t opportunities to teach voters what they don’t know, but rather the time to confirm to voters what they already believe with the issues they care about. That’s why our opponents changed the topic of the election.

The case of Arizona’s Prop 107 campaign in 2006 is instructive, simply because it is the ONLY campaign in which anti-marriage forces lost. People tend to dismiss it as a fluke, but it embodies a very valuable lesson. The proposed amendment to the Arizona constitution that year would have not only barred same-sex marriage, but all other domestic partnership registries as well. LGBT advocates ran a brilliant campaign pointing out how this proposed law would affect straight people — including large numbers of senior citizens who live together but haven’t married because they don’t want to give up their social security benefits. Because they weren’t married, they relied on local domestic partnership registrations for access to local services and to be able to make medical decisions for each other. It also affected a large number of unmarried straight firefighters and police officers, whose significant others would lose access to health benefits. Because it became an issue that straight people cared about — the majority in Arizona as elsewhere — it went down in defeat. A different amendment passed in 2008; that one focused exclusively on same-sex marriage, and LGBT advocates failed to find a hook that everyone could care about. And when we fail to find a hook that everyone cares about, we will lose every time.

And by the way, this isn’t true just about LGBT politics. It’s politics in general. When people voted in 2008 for president, most of them voted based on a desire for “hope” and “change” and “Yes We Can!” on the one hand, or — okay, I can’t remember what McCain wanted us to vote about. Maybe that’s why he lost as badly as he did.

Our failure to answer these three very important questions in the past have become a costly and painful lesson. Our failure in the future to heed those lessons will leave us with no one else to blame but ourselves.