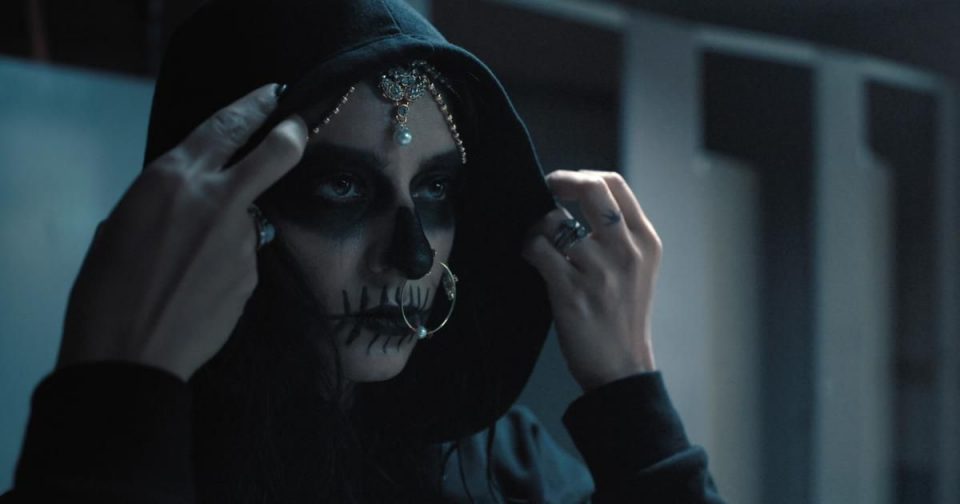 The classic Beatles song “I’m A Loser” gets a rebuke in Fabian Velasco and Milos Mitrovic’s ensemble “anti-comedy comedy” “Tapeworm.”  Each of the members of this ensemble are losers and they are exactly what they appear to be. The film’s characters are: a hypochondriac and his wife Gigi, a stoner couple, a really dull aspiring stand-up comedian, and a nurse and her video game playing son Tyler.

The debut film, which screened as part of the recently concluded Slamdance Film Festival, links these characters in two more relevant ways.  All of them live in Winnipeg, the Canadian version of an American Midwestern town. The other point of linkage is their general namelessness and loose interconnections.

How these characters’ paths cross delivers small surprises.  The hypochondriac first encounters the stoners during their bout of semi-private lovemaking.  A household accident brings together the comedian and the nurse.

The film’s odd title may get directly referenced when the hypochondriac tells his uninterested wife his suspicions of having  a tapeworm inside him. But metaphorically speaking, the film’s characters have a tapeworm of personal discontent in their lives yet lack any ideas for dealing with the emotional parasite.  The hypochondriac continually fails to handle his wife’s chilly lack of affection towards him. The comedian can’t bring herself to confess to her mother, let alone herself, that she’s highly unlikely to achieve success on the stand-up circuit.  The single nurse wants her son Tyler’s affection rather than his undisguised boredom. Tyler in turn lives with his mother the nurse yet has no real life prospects beyond playing soccer video games. Only the stoner couple appear relatively happy by comparison to “Tapeworm”’s other main characters.  Just don’t expect them to quickly answer whether they’d fly across the country to attend a loved one’s funeral.

As “Tapeworm” follows these deliberately boring characters’ lives, it’s obvious these people lack even the potential for performing ridiculously absurd acts.  Instead, actions that are more these characters’ speed are such things as offering second-hand panties as a peace offering or thinking playing a video game makes you a good soccer player,   At best, these beautiful losers’ actions feel sad in their inevitable failure. The hypochondriac’s attempted rage at suspecting Gigi cheated on him comes off as a bad attempt at getting his wife to be less indifferent to him.

“Tapeworm” will ultimately make viewers hope they display none of the degree of lameness of the film’s main characters.

The average American reader will have little idea what the title of the Canadian Broadcasting Corporation web series “The 410” refers to.  The answer is that the titular 410 happens to be the highway which connects the suburb of Brampton to the Greater Toronto Area.

Supinder Wraich’s mini-series concerns someone forced to traverse this route.  Suri Deol (Wraich) is forced to return to Brampton after a year away. Her father Malkit has been busted by the police for carrying a sizable amount of cocaine in the long distance truck he drives.  To get him out of jail, the teenage girl needs to raise bail money fast. However, being a wannabe Instagram influencer hasn’t resulted in money rolling in. Suri’s Nani’s unwilling to put a second mortgage on her house.  But when the girl discovers a few million dollars worth of cocaine hidden by Malkit in the family car, a crazy plan comes to mind.

While Wraich’s story may be familiar, it’s based on real-life incidents of Indo-Canadian truckers being busted for drug smuggling.  What makes “The 410” unique is that the Indo-Canadian community in Brampton plays a prominent role in the story.

Suri has little love for her Indian heritage when she returns to Brampton.  Her hair’s dyed blonde and she wears contacts changing the natural color of her eyes.  Socially conservative Nani also doesn’t care for Suri’s ripped jeans, her gay best friend JJ, or even her yelling “F__k” in frustration.  Being a local spiritual leader might account for the older woman’s attitude.

Malkit initially keeps his daughter at a distance.  This understandably puts added stress on the girl to make her crazy plan work, as her mother has died some time ago.  Yet once the viewer learns what Malkit’s motivation is, he becomes a more sympathetic character.

Suri’s efforts to raise bail money never feel suspenseful.  Her mistakes or setbacks lack the emotional weight of fear at the possibility of not achieving her goal.

What makes the story work better are the symbolic steps Suri takes to accept her heritage.  The blonde dye job came from a lifetime of drinking the white female standard of beauty. But after Suri washes out the dye, JJ provides the moral support for Suri to believe in her natural beauty.

The banging soundtrack for “The 410” proves one of the mini-series’ great strengths.  The songs meld rap and Indian pop music in intriguing ways. One song memorably becomes a Greek chorus in describing Suri’s attitude towards a gamble she’s about to undertake.

While the Slamdance screenings of “The 410” have come and gone, the mini-series is done well enough that it would be a solid program item at the next CAAMFest or 3rd I South Asian Film Festival.

How did Heather Young’s touching FIPRESCI prize-winning drama “Murmur” avoid devolving into sentimental glop?  Seeing lots of dogs and cats on screen in a film can be used to misdirect viewers from noticing the film’s human characters aren’t all that interesting.  Young doesn’t do that here.

60-ish Donna has a drunk driving conviction on her record.  To fulfill her community service obligation, she starts working at an animal shelter.  The work opens this lonely woman’s heart sufficiently for her to become attached to Charlie.  The black and white dog’s health may be slowly deteriorating. But the old woman sees the dog as a kindred soul whose presence helps her move past the need for drinking.  However, when Donna’s affections start extending to other shelter animals and even animals from strangers, a problem starts developing.

Young uses simple but precise cinematic strokes to explain Donna’s character without the need for extended explanation.  Watching the central character’s daily routines provide details about who she is and what her life situation is. The failure of Donna’s daughter Julia to return her calls or even keep in contact with her shows her sense of isolation and loneliness.

Having the dogs and cats seen on screen be less than physically perfect prevents them from visually dominating the movie.  Charlie’s tongue regularly hangs out of his mouth as if some of his wits are missing. Seeing a cat being given a diabetes shot or having to clean up after one of Charlie’s bouts of incontinence reminds the viewer that like Donna, the spectre of death is never far away.

The closest human emotional relationship that Donna has is with her daughter Julia.  Yet despite expressing pride in her daughter, the younger woman refuses to talk to her mother or even return her messages.

Young may not explain directly what caused the estrangement between mother and daughter.  But in following Donna’s evolving relationship with the shelter animals, the viewer will suspect analogous events happened between Donna and Julia.  Charlie’s refusal to eat suggest anger at continued emotional neglect by Donna. Accumulating too many dogs and cats suggests someone unable to deal with empty nest syndrome or other forms of loneliness.

Frequent shots of Donna’s slowly deteriorating apartment show how the woman’s fear of loneliness has undercut her ability to function.  A previously spotless apartment now has clothes strewn everywhere and piles of unwashed dishes. Even cleaning the litter boxes and other basic pet maintenance functions slowly become too much of a challenge for Donna.

Despite Donna’s lies and spotted history, she never comes across as an utterly bad person.  Regularly going to therapy sessions and her lack of outside human contact helps the viewer see why Donna would become obsessed with collecting unwanted animals.  Young’s film ultimately shows the viewer without judgment what might cause a person to become a proverbial cat lady or lad.

“Murmur” deserves to have more audiences see this touching tale of one human’s relationship to animals.  The shots of dog poo wind up having lesser impact than seeing Donna’s nursing of sick dogs. The latter shows the viewer by example the positive power of humanity’s relationship with animals.