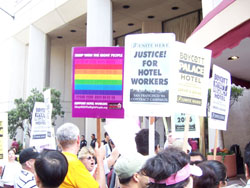 Yesterday afternoon, hotel workers, community leaders, and concerned residents joined UNITEHERE Local 2 in a march against San Francisco’s global hotel industry. Local 2 represents nearly 12,000 workers in San Francisco and San Mateo in their fight for improved working standards in hotels and restaurants. Yesterday’s march in support of UNITEHERE Local 2 is the start of a renewed community-labor effort to bring justice to hotel workers in the city. “I want to retire from this industry pain free,” exclaimed Linda Knight, an activist and cook at the Omni Hotel, “all the public see is the marble, linen, and white sheets [but] but in the back it’s a sweatshop”.

But the public is beginning to see the bigger picture. A diverse array of community leaders marched earlier in the week against Steve Trent, manager of the Grand Hyatt and spokesman for the bargaining group that represents thirteen hotels in the city. Rabbi Alan Lew was among the individuals who stormed into Trent’s office.

“We’re apart of the struggle to let management know we’re serious and unified,” explained Lew. Though he only recently joined the movement, he recognizes the dire situation hotel workers face. He warned, “This is the last stand for the worker, if they don’t succeed in this courage leap, they will continue to be diminished as workers and human beings”.

The combined force of Unite Here did indeed make a strong showing. Their chant, “No Contract, No Peace” thundered across Union Square and into the windows of the neighboring hotels. The crowd marched down Geary and back up O’Farrell, making deliberate stops at the Hilton, Westin St. Francis, and Grand Hyatt.

The conflict at hand erupted nearly two years ago when the contracts of hundreds of hotel workers expired. To this day thirteen hotels have failed to renew contracts with terms acceptable to the constituents of Local 2. Workers are striving for contracts that guarantee affordable health care, increases in wages and pension benefits, and the right to join a union without the threat of employer intimidation.

In front of the Grand Hyatt, Unite Here Local 2 President, Mike Casey, spoke on the failed negotiations that took place last week. He balked at the multi-employer group’s attempts to toss “a couple extra quarters” to hotel workers while still denying them health care benefits and fairer workloads. He encouraged workers to “endure” the struggle and push on for greater rights.

His optimism may not be entirely misplaced. According to Charles Hammock, a previous room service cleaner and negotiator as apart of Unite Here, before 2002 at the Marriott in San Francisco, workers had to fight for their rights everyday. Management kept unions from talking to workers and benefits were scarce. Hammock recalled, “I started out part-time and I could work up to 32 hours [a week] and receive no benefits with the Marriott whereas now a person only has to work 14 hours to receive benefits”.

Nonetheless there is still much progress to be made. Andreas Cabrera, another member of the Local 2 negotiating committee further discussed employer intimidation. One stipulate the union is fighting for, card check neutrality, would “allow workers to freely decide if they want to join a union or not”. In turn, managers could not use the information as leverage in the employment process.

Part of the reason it has been so difficult to come to an agreement is a result of the multi-employer group (MEG) the thirteen hotels formed. Ann Hunt, a long-time member of Local 2, explained that after the first bargaining session the hotels were “legally bound” to each other. In other words, they had to act as a unit from that point onwards. She noted some of the management, for example, at the Fairmont hotel is “not that bad”, while hotels like the Hilton consistently hinder any progress in negotiation.

Last week the MEG offered an economic proposal under which newly hired workers would be ineligible for health care benefits for the first six months of work. After the six months, they’d then be able to receive benefits for $70 a month. Current workers on the other hand, would only have to pay $10 a month.

Hunt mirrored the sentiment of Local 2 in dismissing the MEG’s offering of what she called “poison candy”. If Local 2 had accepted the agreement it would have denied the needs of future workers, and placed current workers in jeopardy of losing their jobs at the end of the five-year contract. Because as Hunt put it, “Who are you going to fire, the [workers] who are paying or the ones who aren’t?”

As speaker after speaker stressed during the conference after the march, it is crucial for the workers to “remain united”. Though their sacrifices are numerous, stepping down now would deny any possibility of laborers earning benefits from their employers. More importantly, hotels would feel no compulsion to make any concessions, knowing they held the power.

With that in mind, the crowd left the hotel community with one assurance before dispersing.