This Week’s Sunday Chronicle an Embarrassment 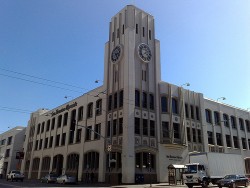 If you want to understand why the SF Chronicle is dying (and will not be missed), look no further than last Sunday’s edition. First, Carla Marinucci had a hit-piece on John Burton’s run for state Democratic Party Chair, which (a) ignored Burton’s progressive accomplishments that have earned him such praise, and (b) wrongly suggested that bloggers don’t support his run based solely on quoting his opponent. Second, Joe Garofoli had a front-page story about politicians courting the blogosphere – which highlighted an event with City Attorney Dennis Herrera that happened more than two months ago! Over four years after Howard Dean showed the power of the netroots, Garofoli acted as if politicians wooing bloggers was some new trend. Finally, the paper assigned Julian Guthrie to cover this weekend’s Cesar Chavez parade – although Guthrie was a scab during the Chronicle’s Newspaper Strike of 1994, and no one bothered Chavez more than a strikebreaker. Meanwhile, the Chronicle’s buyouts have begun, with the paper losing reporters not based on merit – but rather on their acceptance of a buy-out. The paper’s cost-cutting measures should start with laying off writers who produce an inferior product (which would be the logical thing to do.) Instead, the Chronicle is getting rid of the only reporters worth reading.

Beyond Chron has long complained about political reporter Carla Marinucci – from her puff pieces to promote Arnold Schwarzenegger’s re-election, to her bashing San Francisco as a freakish elitist island. On Sunday, Marinucci took a break from her recent coverage of the state’s irrelevant Republican politics to attacking former State Senate President John Burton – who is poised to become the California Democratic Party’s new Chair.

If you read Marinucci’s front-page article, you’d have no idea that John Burton was the most effective progressive champion in the state legislature – whose accomplishments directly benefited poor people in California. There is nobody in Sacramento today who matches Burton’s tenacity – which is why young progressive activists are excited about this 76-year-old veteran legislator taking the helm, notwithstanding the need to have more “fresh faces.” The article made Burton’s ascent look like Chicago-style politics.

Marinucci says a “small but vocal minority” of the party’s netroots – “mostly younger people” – have expressed concern about John Burton’s chairmanship. While she’s right that it’s a small minority, it certainly isn’t vocal. A few bloggers questioned Burton’s run way back in early January, but I haven’t heard complaints in months. If anybody in the netroots has a problem with Burton becoming Chair, I haven’t heard it – and Marinucci couldn’t even name one prominent blogger. The only person she quoted – who said “a lot of people are upset that it’s a coronation” – was Burton’s opponent, Chris Finnie.

Speaking of the netroots, the Sunday paper’s front page also had a piece by Joe Garofoli that “savvy politicos” are “courting” Bay Area bloggers. It was hard to see what exactly was newsworthy about the article, because politicians have been attending blogger functions for years – including all three Netroots Nation conventions, dating back to 2006. Even the examples Garofoli cited were old, since the Dennis Herrera event (which I attended personally) occurred on January 28th.

Garofoli’s piece regurgitated the myth I’ve heard a lot among professional journalists – that blogs are somehow dependent on newspapers, and could not exist without them. The piece ended with a quote by CBS’s Dan Rather: “if you close down the newspapers, who is going to do the reporting? I’m a great believer in the Web, but most Web sites don’t have any reporting staffs.” Obviously, Rather hasn’t been checking out Daily Kos – which does a better job reporting stories than any other newspaper. Garofoli’s article had an undercurrent of insecurity – of the nervous journalist worried about losing his job.

Sunday’s Chronicle also covered the annual Cesar Chavez Day parade – a festivity in the Mission District which honors the legendary labor leader. I didn’t have a problem with the article itself, though I was perturbed at who the editors assigned to write it. It was a bit ironic to assign staff writer Julian Guthrie – who worked as a scab during the 1994 San Francisco newspaper strike – to report on a celebration of a man who fought for the right to walk a picket line.

In 1994, reporters at the SF Chronicle and the SF Examiner held an eleven-day strike to demand better wages from the Hearst Corporation. The strike eventually came to an end with the help of Mayor Frank Jordan, but most San Franciscans went without a major newspaper for almost two weeks. A team of striking writers – including Herb Caen – did their best to keep the public informed during this time through (ironically) an online paper, but not all Chronicle staffers joined in that effort. One of them, it turns out, was Julian Guthrie.

Now Hearst says the Chronicle is bleeding money, but like it did in 1994 is not opening its books. The paper is negotiating buy-outs as a means of cutting costs, and one editor said it meant we would stop reading “a lot of veteran reporters whose names you know.” SF Weekly released a partial list of the folks leaving, and it does include some talented writers.

Unfortunately, what that means is the paper will be smaller and have fewer stories – like the embarrassing ones we read about on Sunday.