This Land Is Toxic, It’s Killing Our Babies and Our Families

by tiny/PoorNewsNetwork/POOR Magazine on April 7, 2005 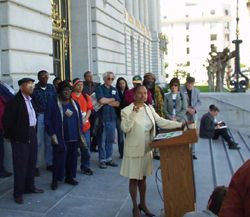 Hosted by Supervisor Ross Mirkarimi, a former environmental analyst and founder of the California State Green Party, the group was gathered in advance of Tuesdays redevelopment hearing. They stood in solidarity with the struggle to bring truth to the horrendous giveaway and corporate payoff of Bayviews’ shipyard land for illegal and toxic development by the huge Florida based developers, Lennar.

The bonds Dr. Sumchai referred to are Mello-Roos Bonds, tax-exempt bonds issued under the Mello-Roos Community Facilities Act of 1982. But what these bonds really are is a huge city ordained corporate welfare program to insure that Lennar will proceed with this frightening project.

“Phase I Development of the shipyard includes Parcels A and B. Parcel A was successfully transferred in October of 2004 amidst charges of conflict of interest and with documented residual soil contaminants including lead, asbestos and arsenic,” continued Dr. Sumchai, relating the terrifying implications of building on land that is on an earthquake hazard zone which is called a liquefaction zone.

“This land is toxic, its been killing our babies and our families for years,” said Barbara G, a long-time Bayview resident, mother and grandmother, who is currently fighting breast cancer and watched relatives become terminally ill from different forms of cancer over the last several years. I spoke with her in preparation for this press conference.

“When we speak we (in the community) are rarely listened to, and yet these huge corporations comin’ from out of state can actually get money from the city to do whatever they want,” Barbara said to me between shallow asthmatic breaths, another serious side effect of environmental racism and classism propagated locally and globally in the Bayview, Richmond, West Oakland and Bhopal India by corporations like Lennar, Chevron and Union Carbide.

Lennar Development was poised to break ground in March of 2005, but development has been held in the face of legal challenges to the shipyard’s Environmental Impact Report. The report failed to adequately analyze transportation impacts, radiological, seismic and residual soil and building contaminants, including lead and asbestos.

Corporate-friendly Mayor Newsom has made sure that Lennar has had every privilege possible to make this illegal development happen, so much so that the Redevelopment Agency is proposing a special election of District 7, which will tax the very residents that will be impacted by this development, which will override Newsom’s own bond indebtedness moratorium.

Barbara concluded with the prophetic words, “I can only hope that the people will prevail in this case, cause this development will lead to the death and illness of even more people.”

For more journalism on issues of poverty and racism go on-line to www.poormagazine.org