THIS IS WHAT HAPPENS IN THE DETECTIVE BUSINESS 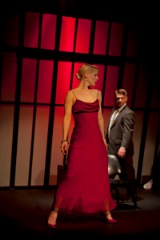 DETECTIVES ARE EVERYWHERE. And it’s all bad business. This Detective is not going to let you get away with anything – and he sniffs around like a Fox. Sam Spade is an early “Dick”. Of course that was from a Movie. Bringing Noir to the Stage is a little more tricky – and that’s where the great Noir cliches come into play. The flaws in the play are it’s greatest moments. Everyone seems to head for an outcome that they can’t escape.

Film Noirs are all about femme fatale characters that lean over the desk to get the attention from the Detective. Yeh, the cleavage will do it every time. But hold on – this “Dick” is not going to fall for it. He’s been around the block a few times and if there’s one thing that he hates is a double-crossing dame. And this blonde bombshell knows how to sell herself.

‘A KILLER STORY’ introduces us to Praveen Sengupta, a brilliant neuroscientist, who has made a fabulous scientific discovery. But then – he turns up missing. Gee Wiz… the clever hard as nails private ‘Dick” has plans on how to track down the Scientist. Then there is the sultry seductive wife Lara, who tries to wiggle her way out of everything. Sorry Lara – but were onto you. And we love you for it. Even though we know that you are out to trick us all.

This ‘Marsh Berkeley’ play is one of the most adroit, hilarious satires I’ve see in a long time. Very fine acting from start to finish, and Astute Direction.

There are some that would argue that film noir is the genre of obsession. So – “I’m obsessed!” How else can I say that this is a shining jewel in this genre’s crown.

NOW PLAYING AT MARSH BERKELEY (a few steps from Bart)