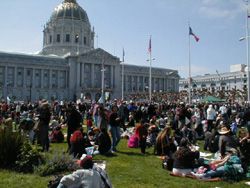 As politicians and the public gear up for the budget season, City Hall must work to ensure that everyone gets a real voice in the process. In past years, city officials have dominated hearings that drag on for hours and hours, with small windows of time appearing unpredictably for public comment. Once budget decisions get made, many often feel that deals were cut well before the hearing, and that their input mattered little. When Mayor Gavin Newsom unveils his budget tomorrow, the Board of Supervisors should take some immediate steps to ensure this disenfranchisement from the public process does not happen again.

For starters, the current practice of beginning a budget hearing at 9 in the morning, ending it at 9 at night, and having public comment appear at undisclosed times sometime in between must end. Rather than allowing department heads to take control of the hearing and speak for hours on the intricacies of line items of their budget, leaving the public twiddling their thumbs until they’re called on, specific times should be set for public comment.

The system could work like this: At 9 a.m., the budget hearing begins. City officials get two hours to explain the budget and answer questions. Whether they think they’re done or not, at 11 a.m. public comment begins. Once people are finished speaking, conversation between governmental bodies can continue. This sort of structure would continue throughout the day.

This system would allow everyday citizens to speak their minds without wasting an entire day of their lives to speak for two minutes. This system could also make sure to set some of the times for public comment after 5 p.m., giving many working people a rare opportunity to voice their opinion about city affairs.

Another way to structurally improve the process would be to ensure one department’s or agency’s budget gets taken up at a time, rather than the current practice of scheduling a variety of hearings on the same day. The latter not only confuses people, but it makes it even more difficult for everyday citizens wanting to speak on a certain part of the budget to nail down exactly what time that part will be heard.

Supervisors should also be more willing to continue budget hearings if they go past a certain time. This would ensure that those who scheduled a certain chunk of their time to attend a budget hearing would not be forced to spending several more hours at City Hall than they planned. It would also keep vital decisions from being made at extremely late hours, out of the public eye.

However, allowing the public adequate time to speak through structural reform does not solve the entire problem. The bigger issue involves public officials cutting deals with the Mayor and other big players before they even walk in to a budget hearing, a practice leaving the public extremely skeptical their voice means anything.

Those familiar with the budget process knows how it works – the Mayor offers a deal to a member of the Board, something like, ‘I’ll keep a hospital open in your district if you support my cut to a self-help center in someone else’s district.’ The Supervisor makes a political calculus and decides it’s worth it. By the time the deal’s done, a ‘jenga’-style tower of give-aways and compromises make up the final budget.

While compromise represents a necessary part of the budgetary process, the public should have a say in the compromises they want to make. Allowing this to happen is much harder to logistically solve than calling for more structured public comment. It takes a commitment from our elected representatives to honestly engage their constituencies in the entire process, not assume they know what’s best for them.

That requires a tremendous amount of time, effort, and listening, especially to ensure that the people of color, labor, LBGTs, women, seniors, youth and disabled people in each Supervisor’s district gets their two cents in. But this is what true representation is all about.

Let’s hope our elected officials can step up to the challenge.