This Boy had his hands in the Air

by tiny/PoorNewsNetwork/POOR Magazine on August 30, 2004 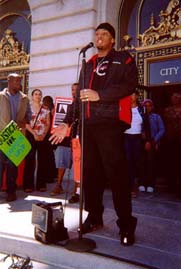 “I am here and I won’t go away”, A deep heat flowed in from the tropics beating down on the alabaster concrete steps of City Hall on Thursday, while the melodious voice of Isabel (Mother) Boyd, Cammerin Boyd’s grandmama began filling with tears of unjustified grief, ” In May my grandson, Cammerin Boyd, was shot down like a dog in the streets, he was murdered.” With each tear she brought everyday sounds and movements trying to happen to a complete stop.

“The mayor won’t even talk to my daughter – his mother” Mother Boyd was addressing a crowd of extended family, community members and activists gathered on the steps of San Francisco City Hall to demand that Mayor Newsom make good on his promises to meet with the Boyd family and call for discipline of the police officers involved in the shooting of the 29 year old disabled brother of color, Cammerin Boyd killed in May.

“My grandson was good boy, Mother Boyd continued, calling on generations of Black mothers and grandmamas who lost their kin to the bullets of brutal police forces across the country acting on the false pretense of “To Protect and to Serve.”He was gonna be a football player, so what happened?.. One night before he graduated the CHP ran him off the road and crippled him, took his legs from him. Now this May they finished him off and they aren’t doin anything about it,” Mother Boyd gave the tragic background of Cammerin who less than ten years ago had had another brutal “run-in” with police which resulted in him being permanently disabled and left with prosthetics and mostly relegated to a wheelchair, ” and please I beg you to look into this case, not only for my grandson- but for the 26 other cases (of people shot by police) who were shot for what? Just because they are poor minority and Black.

“Mother Boyd concluded in a tearful plea, ” This boy had his hands in the air”- this boy was crippled- and they just kept shooting him and shooting and shooting – Its Wrong wrong wrong…

“After Cammerin was shot near a housing authority complex in the Western Addition there was community outrage about what really happened and as is always the case with these invasions of police into poor communities of color their were multiple contradictions from the people versus the so-called “official” versions of what actually happened. Including the fact that Cammerin had his hands in the air in surrender when the cops started shooting and then that after the cops had killed him they kept on shooting into his already dead body.

“It fills my heart to see you here today-to know that other folks are involved in this battle for justice – but the battle is just beginning, Marylon Boyd, Cammerins’ mother spoke to the crowd about the shifty tactics of Newsom in dealing with this case and police accountability in general who due to community outrage about the shooting in May had given multiple assurances that the case would thoroughly investigated, but in the last four months since the shooting nothing has happened.

“I came to City Hall just two days after my son was killed because I heard that he (Newsom) had called a special meeting where he invited everyone in the community to hear what happened to my son, but he didn’t invite me Once again today I came to Mayor Newsoms office because he is holding a press conference about this case – I asked if I could be involved and get some information – once again I was turned away because I didn’t have a press press, ” Marylon’s description of the Newsom media shuffle of this case was typical of his dealing with several complicated issues affecting poor folks and communities of color always setting the public stage to make him look good while he doesn’t actually have to do anything.

“We are here today because Mayor Newsom can find time to meet with press corps of SF but not the people of San Francisco, ” the action was Emceed by organizer and community activist Jakada Imani who also called out SF police Chief Fong for her complicit inaction in this issue, “Chief Fong can’t find time in her busy schedule to sit down with Marylon Boyd – even though she promised to – so we have come here today to demand that they meet with the Boyd Family like they promised.

“The police department actually had the gall to close its investigation into this matter. But we in the community all know that’s just another government inspired “cover-up” to protect and to serve its own. The police investigation ignored key witnesses and crucial information and found no failure in the police’s action.”We are out here today because this police department has failed the community over and over again- and then worse the mayor and chief Fong has washed their hands of it,” Maliaka Parker from lead organization Bay Area Police Watch addressed the crowd about Newsom’s failure to hold the police accountable at all, “He (Newsom) has a responsibility not just to play basketball with some black kids but to make hard decisions, and for those of you all that don’t know, Newsom has given more money to get 50 more cops on the force” Malaika was talking about Newsom’s recent decision to grant the police department more money to “fight crime” i.e., send more cops into poor communities of color like the Bayview and the Mission.

“We all want peace and to be safe- but recently this city has failed to keep us safe- my cousin Cammerin ‘s life was taken from him by the SFPD” This day was all the more powerful as it included so many family and extended family dedicating their time and energy to see this issue come to justice including Cammerin’s children’s mothers, his anties, uncles and even Cammerin’s cousin , Patrick Taylor who spoke so eloquently to the crowd about why justice must come to this case, ” it is now time for freedom from this pain and all this grief, truth and justice will release that peace we all need”.

” I can’t rest -my disabled brothers and sisters are being shot dragged and beaten to death, One of the last speakers at the action was POOR Magazine/PNN’s own columnist and revolutionary poet, Leroy Moore, long-time advocate and national organizer for issues affecting disabled people of color, who opened his shout out with the first line of his poem Can’t Rest ” For ten years I have traveled around this country protesting police shootings of people of color with disabilities, but we aren’t asking no more, we are taking justice – I am sick of seeing my black brothers and sisters killed by police – if they won’t let us in the press conference we’ll push the doors open”

Leroy provided the perfect ending to this powerful day, because the truth is, if Newsom and Fong continue to refuse this family and our whole community the justice we all deserve about yet another young man of color who was taken down by brutal police action we won’t take it – and we all Can’t and Won’t rest.

For more revolutionary journalism, poetry on the ongoing resistance to police brutality of poor folks go on-line to www.poormagazine.org and click on incarcerated peoples/police abuse.