They Still Should’ve Been Called the Senators 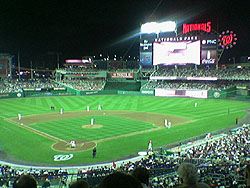 So I’m walking down Hayes the other day when I spy my good buddy, “The Giants Curmudgeon.” “Hey NC, what’s going on?” he asked. “I hear you’re goin’ back to DC for a visit. Gonna see a Nationals game?” “I hate the Nationals,” I told him. “They should have been called the Senators. They’re the Expo’s, stolen from Montreal. I hate it when teams move.” “We’ll I’m glad the Giants are here,” said the GC. I told the GC that a buddy had season tickets and I was going to see them play the Cubs. “Ooohhhh, that could be ugly”, said the Curmudgeon. “Hey, why don’t you write up somethin’ for Beyond Chron?”, he asked, “Report on what you see and hear on the Nats. I’m takin’ Monday off.” “You’re on GC”, and I headed off to Dulles by way of the new Virgin America flights from SFO.

I grew up going to see the Senators in the late ’60s with Frank Howard and Harman Killebrew when I was a kid; “Hondo” was the man!! I remember my Dad, my neighbors and kids, all piling in the wagon to go to “DC Stadium”, (renamed RFK after Bobby Kennedy was killed); my first ballpark dogs; I loved it. Remember that logo, with the pitcher winding up in front of the Capitol dome? It was ass-kicking; that was my childhood cap, red, or one with the “W” on it. That was the beginning however, of the end of Baseball in DC, because not once, but twice I had my heart ripped out because now, the Senators were finally gone for good.

I learned to hate the “Twinkies” when they took them away in the ’50’s and I hated the Rangers even more, when they permanently took them away in ’71… I grudgingly became an O’s fan. They were the only game in town; You rooted against the Sox and  Yankees. The Family Ripken, Earl Weaver, Frank Robinson, all helped soothe that 45 minute drive; you cheered when they finally won the series and you nearly rioted when they broke their 0-23 losing streak…

I soon hated the Colts for leaving Baltimore and was bummed they took the team from Cleveland, which according to my Dad, had a huge African American following back in the day because of Jim Brown. The Colts were often considered a little racist. Hooray for the Ravens, I’m glad they won the Super Bowl, but that was just wrong; It should have been Cleveland celebrating. I just hate it when teams move.

Now I’ve waited for years for a team to come back to DC, and with promises to be called the Senators and like a few other Washingtonians, I got tired of waiting. I moved to SF, meanwhile, more promises and backroom deals were made, Orioles owner Peter Angeleos losing his mind over loss of revenue with a team so close to the O’s, and conspiracies to get the Expos. The years were filled with meaningless exhibition baseball games; the Redskins leaving for “FedEx Field”; DC United moving in, the growth of “mutant-sized” critters… Enter the Nationals.

So I was extremely disappointed that when we did get a team, they were called the Nationals?! What happened to the promise of being called the Senators?? Money?? Marketing?? They did the same thing to the security guard who designed the Ravens short lived, but infinitely better logo; rather than pay him, let him sue and came up with a new logo that’s ugly as hell and looks like a college logo. They finally settled with the guard in court.

As for the Nationals?? I’d pretty much disowned them. The Nationals arrive with all the politics one can imagine; a Mayor, desperate to make history and bring a team; his predecessor alienated the late Redskins owner, Jack Kent Cooke, aka “the Squire”, you don’t do that in DC and succeed. The DC City Council making war on each other for a better deal; The owner of the Orioles managing to get the TV rights and a sweetheart deal for the next decade and beyond as compensation, (disgusting); and finally the tax payers of DC end up footing most of the bill. These are the same taxpayers who have no real representation in Congress and pay some of the highest taxes in the US. At least the license plates now say “Taxation Without Representation on them now, instead of “It’s a Capital City”.

I got to DC; beautiful weather, Cherry Blossoms; lush. I breakfast at Tryst, then meet my chums and take Metro to the new Green Line Navy Yard stop. My Grandfather used to work here. It’s Friday night and the ballpark is packed. Great seats, section 215, Row D, above home plate. Place is killer… Ben’s Chili Bowl is on every level; micro beers, all the MLB trappings… I walk around, and see a really great view of the Capitol from the right spot; the Citgo sign near Fenway can’t top that view. Where are all these rowdy Cubbie fans coming from?

“This could have been the Senators” I’m thinking, when my eye catches walls with filled with the history of the Negro Leagues… and the Senators!!! There’s Hondo… Ted Williams… The history, and best of all… the logo. Jeebers, Where are all these rowdy Cubbie fans coming from?

The Nats take a 2-0 lead, but the Cubs keep getting hit after hit and eventually tie the game at 3-3. Bottom of the 9th, one man on… A drunken Cub fan proudly tells me he’s had 9 beers and 3 Ben’s Half Smoke Chili Dogs… His wife corrects him, “You only had 7 beers…” Suddenly I hear a crack of the bat and a looping shot heads back, back, back over the right field wall… HOMER!!! “Nats Win, Nats Win, Nats Win!!!”” Game over, 5-3. Everyone, except the Cub fans are high five-ing… We head back to Metro, and everyone is jubilant. Guess I’m a Nats fan… They still suck, and they should still be called the Senators, but one question still nags at me… Where are all these rowdy Cubbie fans coming from?!