There’s Something Rotten in Sacramento 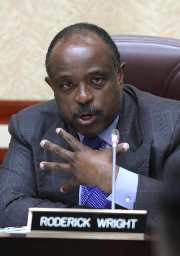 In the past two months, Sacramento’s Democratic-dominated Legislature has defeated a bill seeking to penalize landlords for wrongfully withholding security deposits and moved toward raising phone rates for 1.2 million low-income Californians. These votes confirm the enormous power that real estate and corporate interests have over the Legislature, despite the Democrats 2/3 majorities. In a July 14 story about donations to Senator Rod Wright’s legal defense fund, the Los Angeles Times reveals just how rotten Sacramento politics has gotten, Wright, long the most pro-landlord vote in the State Assembly despite representing an overwhelming low-income tenant district, is facing eight felony charges for allegedly running (and being elected) in a Senate district where he did not live. Among the many corporate interests coming to Wright’s rescue with big checks ($5000) is AT&T, whose interests Wright just advanced by backing the bill gutting the state’s Lifeline phone program. The California Real Estate Political Action Committee kicked in $25,000 for its longtime ally, second only to a PAC connected to the Cal Chamber of Commerce, which gave $55,000.

After the November 2012 elections brought California Democrats veto-proof majorities in the Legislature, optimism toward the passage of progressive legislation was in the air. But the Legislature is as dominated by, and beholden to, big money interests as ever before, leaving even long protected programs for the poor like Lifeline phone service now open to attack.

The now troubled Senator Rod Wright symbolizes big money’s influence. Donations to his legal defense fund are not limited by campaign contribution laws, so corporate and real estate donors are spending freely on his behalf.

Dean Preston, director of Tenants Together, California’s statewide organization for renters’ rights, noted: “ Ironically, Wright is charged with falsely claiming to live as a renter in an apartment building he owns in the district. It’s hard to imagine a bigger insult to tenants: a landlord legislator charged with pretending to be a tenant, fighting the charges with landlord money while he votes against tenants.”

But Wright is hardly the only Democrat putting big money interests ahead of their constituents. As Larry Gross of the Los-Angeles-based Coalition for Economic Survival described in an email to members, Democratic Assembly Member Steven Bradford (D-Inglewood) was “the front person for AT&T in authoring AB 1407, which turns Lifeline into a voucher system that provides no protection from rate increases and gets rid of most oversight by the California Public Utilities Commission (CPUC).” AT &T made $841,000 in campaign contributions in the 2011-12 legislative session and spent $4.4 million on lobbying government officials during the same period.

Governor Brown’s consumer-oriented California Public Utilities Commission (CPUC) voted 4-1 to oppose AB 1407 at its June 27 meeting. One of its members testified against the bill at the Senate hearing. This offers hope that Brown will ultimately veto AB 1407, whose attack on the poor would be all over social media if pushed by Republicans rather than Democrats.

When “Big Daddy” Jess Unruh offered his famous description of Sacramento politics—- “If you can’t eat their food, drink their booze, screw their women and then vote against them, you have no business being up here”—many elected officials had safe seats and served in the Legislature for decades. The reason some could take lobbyist’s money and then vote against them was that they did not need such funds to sustain their careers.

Opponents of term limits (Prop 140) argued that it would increase the power of moneyed interests because seasoned lobbyists would be dealing with inexperienced legislators. But the far greater impact has been to increase politicians’ dependence on corporate and real estate donations.

Prop 28 on the June 2012 ballot improved term limits by extending terms to twelve years, but it does not apply to any legislator in office at that time. This means that ambitious legislators will still be turning to AT &T and other corporations for financial support, and then voting against the Democratic Party’s electoral base.

Unions are the driving force behind progressive economic reforms in Sacramento, and where labor interests are at stake Democratic politicians know they must go along. But unions can only do so much. And on issues impacting low-income Californians where labor is not directly involved, like security deposits and low-income phone rates, Democrats are comfortable going with their real estate and corporate benefactors.

It is hard to believe, but in comparison to 2013 the legislative era of Speakers Jess Unruh and Willie Brown seem like the good old days.

Randy Shaw is the Editor of BeyondChron. He analyzes how to pressure Democratic politicians and hold them accountable in his new book, The Activist’s Handbook: Winning Social Change in the 21st Century.