There’s No ENDA to the Cowardice 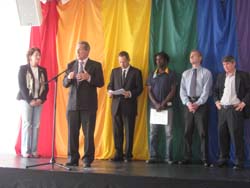 Supervisor Tom Ammiano probably gave the best characterization of the Human Rights Campaign (HRC), a national gay rights organization that is currently on the hot seat for dropping “gender identity” from the Employment Non-Discrimination Act (ENDA), the Congressional gay rights bill. Said Ammiano, who is running for State Assembly this November: “HRC shouldn’t be the Human Rights Cowards.”

Cowards they are, or worse. HRC nixed transgenders from inclusion in ENDA last year, because they claim there wasn’t Congressional support for that part of the bill. Forget the fact that President George Bush wasn’t about to sign a gay rights bill anyway, with or without gender identity. Congress has never had the votes to overturn a presidential veto.

Groups throughout the city, including the Harvey Milk LGBT Democratic Club, And Castro 4 All, the SF Labor Council and Pride at Work, are calling for a “Left OUT Party: A Genderful Gay-la” outside HRC’s annual dinner at the Westin St. Francis in downtown San Francisco on July 26. In addition, the coalition of groups wants queer politicians and others not to attend the dinner.

The groups held a noon press conference June 24 at the LGBT Center to announce their boycott and garner support from the city’s queer community.

“The goal,” said transgender activist Robert Haaland, “is to educate elected officials so that they won’t choose to be on the honorary committee (of the dinner) or be table captains or attend it.”

Theresa Sparks, transgender president of the Police Commission, said that she recently returned an award she received from HRC several years ago. She said that HRC needs to remember that “transgenders have been involved in the (gay) struggle from day one.” In fact, the Stonewall Riots, largely seen as the beginning of the modern gay rights movement, was initiated by transgenders when police raided a West Village bar after owners failed to make their regular payoffs.

John Newsome of And Castro 4 All called HRC’s decision to exclude transgenders “a matter of bigotry.” Castro Supervisor Bevan Dufty said he’s been at every HRC Dinner, but wouldn’t go to this one. Former Milk Club President Michael Goldstein promised that “there’s no way those of us who care are going to leave transgenders behind.”

It’s all very troubling that with all the controversy that HRC provoked last year by abandoning transgenders, the group hasn’t had a change of conscience.

What’s it going to take to get HRC to wake up and smell the bad PR it is getting. Not to mention the fact that it is on the wrong side of history. There was a time when gay groups got away with excluding transgenders, but fortunately not anymore.

Queer politics has evolved to the point that there’s really a T in LGBT. Back in Philly in the early 70s when we were mobilizing for a gay rights bill, members of Radicalqueens, a group I co-founded, lobbied for it to include “gender identity.” We lost.

Incrementalism means someone stays, as John Newsome said, “under the bus” for a long time while everyone else gets to enjoy the ride.

It may be expedient, but it will never be fair.