There’s A Few Holes In Holes 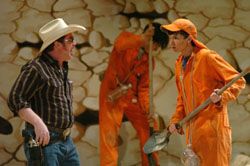 What should have been a great tale of adventure in a boys life – somehow gets lost in the shift from a book to a movie to a play “Holes” that is now on the stage at the Orpheum.

It started out as being a children’s novel written by Louis Sachar who also constructed the stage adaptation. This is the story of a young kid, Stanley Yelnats who is a likeable kid. He has bad luck along the way of growing up. For instance: He is just walking down the street when a pair of expensive sneakers fall out of a tree in front of him. As he picks them up – a cop arrests him for stealing the celeb shoes. Then there are the flash backs to another time. Stanley blames his bad luck on his “No-good-dirty-rotten-pig-stealing great-great grandfather.

The kid is sent to Camp Green Lake, which is anything but Green. It was once a lake in the late 1800’s, but now is a dried up desert wasteland that has a secret history. One of the secrets is that Stanley’s great-great Grandfather grew up in the town. Camp Green Lake is one of those places where they send troubled boys who are supposed to learn how to be good boys. Like most of these dumps – the boys are immediately verbally abused by the attendants and the female Warden. In the movie the role was played by Sigourney Weaver. She orders all the boys to dig holes in the dry desert everyday. The boys work hard under the hot sun and get very little water to drink. Well, you be the judge. Isn’t this cruel and unusual treatment? I’m not sure that this is a play that children would want to see. Plus, the plot is a little hard to follow at times with all the flashbacks.

The problem here is that there is no spark. Nothing to amuse children. Annie was a children’s play. They really enjoyed it. So is Cirque Eloize at the Curran. Both of those shows have the elements that children get excited about. Color and action. The only time the children got excited at the performance I attended was when Lizards came crawling out of one of the holes.

The cast delivers the story even without the action, emotion or passion that would make this more interesting. It’s not their fault. The problem here is that the direction is not very ingenious. It would take some imagination – but there would be hope for this story to excite all ages with a faster pace.

I know you want to know why the kids have to dig holes all day. The reason is that sometime in the 1800’s someone buried something around the now dried up lake. The rumor had been bouncing around for years – and the Warden is determined to find it. Thus, the boys are required to dig and dig and dig. This play tries to aim straight for the heart, but misses.

Even in a reform school – there most be some amusing things that happen. It would have helped to have more levity in “Holes”. After all – it’s not supposed to be “Oz”.

THE CAST: Greg Ayers (Zero and others), Levi Damione plays Stanley’s Dad and the Toughest Kid in Camp. Levi was in the West coast premiere of the Terrence McNally musical “A Man of No Importance at the New Conservatory Theatre. Lauren Grace plays the Warden among other characters. Christy McIntosh has played Snow White at BBB and now is playing Kate Barlow and Sarah in “Holes”. Devon Graye (Stanley) is a recent high school grad and a student at the American Conservatory Theater. You will see him later in the feature film “Her Best Move.” They have the talent and the heart for acting. I was impressed with them.

To bring everything into focus – “Holes” is a mix of Fiddler on the Roof with a mean Warden at a Boy’s reform school. Set it to music and you would have a Mrs. Hannigan as the Warden. But I’m not a kid. However, my observation is that the kids were not having a good time. Next up in the “FamilyStage” series will be “Rock Odyssey” and “Kabuki Gift” – both in 2006. Although “Holes” did not bring home the Gold for me – I salute SHN for trying to bring plays to the stage that would be great fun for the whole family.

FLASHDANCE: “Ring of Fire” – the musical that was to begin it’s Broadway run in San Francisco has been canceled. According to the producers – it will open it’s run directly on the New York Stage. Celebs ask? Is this another “Lennon”? Ring of Fire is about singer Johnny Cash. A replacement of the show will be announced later.

Shawn Ryan – the hoop-de-do all-around talent and Cabaret Singer is bring a few of his friends with him to SF to help raise funds for Scholarships to the Young Actors’ Theatre Camp. Ryan will be joint by boffo talent, who is soon to debut in New York with her new show “Drunk With Love” – about famed Francis Faye. And there will be Barry Llyod, Russ Lorenson, Linda Kosut, Lua Hadar (who also is opening a show on Broadway) and other surprise guests. This is part of “The blue Skies National Tour.” Mark this evening. Sunday Oct. 2nd, at the Empire plush Room. 8pm/$25 donation. It’s worth it to educate Children with the Arts. See you there.

NEXT WEEKEND is the exciting premiere of Terrance McNalley’s new play “Crucifixion”. Opening is already sold out. It’s the hot Tix in town at the New Conservatory Theater.

“I went to see Miss Saigon in Concord. It was a good production and quite professional. However they promised in their ads that they were going to have the vintage Cadillac on the stage. They didn’t. This annoyed me.”
B.T – Concord. – Sorry B.T. – next time drive your own.

“I saw Holes. It is definitely not appropriate for young children. Would their parents let them watch a program about inhumanity at home? I wouldn’t” MJ – San Francisco. – No argument from me MJ.

“There is a big gap between adult & Juvenile entertainment & Holes falls right in that hole. It would be hard to find a show less suitable for family audiences.” T. England – Palm Springs. — — Got it Mr England, see above.

“Buzz. Went to see “Rain” on your recommendation. My wife and I both liked it. Now I’m going back to see it with my Mistress. What do you think about that.” — I think that you are a bad boy.

“Just heard that Judy Garland’s ex, Sidney Luft died. Did you know him? — Yes, I met him and once wore his son’s sweater on a chilly night in L.A with another of his ex-wives. By the way, Luft produced Garland’s 1954 hit “A Star is Born”.

SEX ALERT: “There is new sexy film by Atom Egoyan in which Kevin Bacon discovers which side of Bacon Colin Firth prefers.” D.M – South of Market. – My D.M. You do have a way with words, and I’m sure you just sold many tickets to this pix.

“Don’t know if you had heard this tragic news yet, Lee. Michael Wittenberg, Bernadette Peters’ husband was killed in a helicopter crash on Sept. 26.”– Mr. Broadway.