There Goes the Gayborhood… 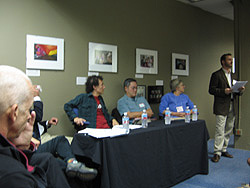 Are gay neighborhoods worth saving? The answer may seem obvious, but it led to a fascinating and well-attended panel discussion Tuesday night at the GLBT Historical Society. The Castro has been an internationally renowned gay mecca for decades, but gentrification has made it increasingly unaffordable. The Castro prides on being a tolerant community, but it is overwhelmingly white and male. Just last year, a new organization called And Castro For All sprang up to protest racism at Badlands, a popular local bar and dance club, after African-American customers and employees reported being mistreated. As Don Romesburg, who moderated the discussion, pointed out, the decline of gay neighborhoods is a growing problem that LGBT communities face in cities across the country. The South End in Boston, the West Village in New York, Capitol Hill in Seattle – all of these neighborhoods are becoming less affordable and less gay. Which raises the question, are they worth saving?

All six panelists agreed that it was important to maintain socially tolerant communities that queer people can consider their spiritual home. “We want a place that is safe for gay people,” said Ruth Mahoney, Board member of the GLBT Historical Society. “It functions as a homeland even if you never come here.” Brian Basinger of the AIDS Housing Alliance emphasized the political importance of having a gay neighborhood — minority groups need to have geographic concentration if they’re going to have clout at City Hall. Tommi Avicolli Mecca of the Housing Rights Committee stressed the need to have an accessible gay neighborhood for young queers when they come to San Francisco. But, as Mecca said, the neighborhood is not worth saving if it does not include all economic sectors of the queer community.

Economic gentrification and the difficulty for the next generation of queer activists to move to the Castro was the overriding concern for the panel. Anne-Marie Rogers recalled how she moved to San Francisco in 1991 from Iowa, when there were abundant group-living arrangements that young queer activists could plug into. “My mother told me not to move in with lesbians who are over 40,” she recalled with a smile on her face, “because they’re all perverts, she said. But I found other options.” Ruth Mahoney moved to San Francisco in 1971 expressly to come out of the closet, and she “came out on Henry Street.”

But those opportunities are simply no longer available for today’s queer youth. “The Castro is in a bad direction,” said Mecca. “It’s been heading that way for the last ten years. Greedy realtors and landlords have cashed in big-time.” After the dot-com boom drove rents in the area into the upper stratosphere, real estate speculators bought up apartment buildings and used the Ellis Act to evict tenants. Then, they would sell them for an obscene profit as tenancies-in-common (TIC’s). “Harvey Milk could have never had a camera store in the Castro today,” he complained.

There were no kind words for real estate speculators – who are literally eating the Castro alive like vultures, as they displace vulnerable tenants. One of the panelists (Ruth Mahoney) is about to lose her home of eight years at 17th and Noe through the Ellis Act, and even she acknowledges that her fate won’t be as bad as others. “For me,” she said, “it means that I’ll never be able to live alone again and will have to move in with roommates. But for my neighbors who have been there for 25-30 years, it means that they will never be able to live in the Castro.” Many tenants in the neighborhood survived the AIDS epidemic of the 1980’s, only to get displaced later by speculators. Ironically, many of those who are doing the displacement are gay.

The evolving gay population in the Castro raised serious concerns on the panel, as it led some to wonder whether it would remain a sanctuary for all queer people. “Affluent gay professionals now talk about property rights and safety,” said Gerry Nakano, “not the openness of creating a tolerant community for outsiders. There are many gay people who would be willing to have anonymous suburban bliss over a centralized neighborhood.” Or as Mecca put it, “the Castro is not just a business district – it’s a historic district. We need a vision for the Castro that is welcoming to all economic sectors.”

But with all the talk of “gay gentrification,” one issue touched on at the panel was whether queer people were the ones who spawned the gentrification itself. Mahoney, who came to the Castro before it became a gay mecca, spoke of the straight-owned businesses who had to leave during the Seventies because they could not afford the higher rents. “These businesses were not gay,” she said, “but they were very supportive of how the neighborhood was becoming a gay haven.” They were replaced by upscale gay-owned businesses.

But as Mahoney pointed out, in the Seventies the real estate industry cynically used gay people as pawns in their aim to gentrify the Castro. “I was involved in a group called Lesbians Against Police Violence,” said Mahoney, “and one of our members worked in a real estate office. She came upon a widely circulated memo that outlined their strategy. First, landlords who owned property in minority neighborhoods were told to rent to white lesbians. This would cause resistance among people in the community at first, but white lesbians ‘knew how to protect themselves.’ Once they had created space in the community, next rent to gay men – because they ‘know how to fix up’ the building.” Simply put, the industry used gays and lesbians who sought to create a new community as a means of pushing out people of color and transform the neighborhood over time.

While many discussed the inherent nature of change in any neighborhood, Alan Martinez of the Castro Coalition had some provocative statements about whether change is natural. “People make cities,” he said. “Not individually, but through public policy and through group acts. Cities are what we make of them. We create the economic policies that make cities happen. People make choices to move to District 8.”

As for what to do about this crisis, Mecca listed various public policy solutions: (1) repeal the Ellis Act, (2) a moratorium on market-rate housing and on condo conversions, (3) community land trusts, (4) commercial rent control, (5) vacancy control, (6) creating space for non-profits, and, most provocatively, “every queer group must embrace an anti-gentrification agenda.” Unstated in his speech, however, are that half these solutions would require a change in state law.

But despite the fear that saving the Castro will be a daunting task (or some would even say a lost cause), there was a tinge of optimism at the forum. “There’s enough people in this room to achieve the goals we are talking about,” said Basinger. “We have an opportunity here – as well as a responsibility. We have an opportunity to lead change – rather than be victims of change.” Or as Martinez put it, “if you try to get everything you want, you get 10%. And that might just be worth it.”