The Working-Class Origins and Legacy of International Women’s Day 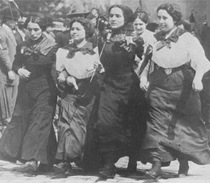 International Women’s Day’s origin was both socialist and feminist in nature, specifically calling for the celebration of working women and the mobilization of all workers to fight for women’s social, economic, and political equality.

March 8 is International Women’s Day (IWD), an annual tradition that began over a hundred years ago. While celebrations continue worldwide, few people remember that the holiday was first initiated by American Socialists. As legend would have it, they were inspired to hold a demonstration in order to mark the anniversary of an 1857 female garment workers’ strike in New York. However, the more accurate account is that in 1908, the Socialist Party of America established a National Woman’s Committee to aid in the party’s recruitment efforts, and the committee’s first action was to declare the last Sunday in February to be Woman’s Day.

Either way, IWD’s origin was both socialist and feminist in nature, specifically calling for the celebration of working women and the mobilization of all workers to fight for women’s social, economic, and political equality. Theresa Malkiel, a New York labor activist and member of the National Woman’s Committee, declared the Socialist Party to be acting as an “oracle, proclaiming the happiness of the days to come” through the creation of the holiday, describing its purposes “as a day of woman’s coming greatness, as a token of her just demands, [and] as a protest against her present disqualification.”

While May Day celebrations—also pioneered by U.S. labor and radical movements as part of the campaign for an eight-hour day—had been taking place since 1886 and regularly received mass support, women were discouraged from attending due to threats of violence and prevailing misogyny within labor organizations.

Though the Socialist Party was not without its share of sexism, American Socialists were nevertheless at the forefront of the feminist movement in the U.S. Support for women’s suffrage had been a key part of the party platform from its early days, and many shared Socialist presidential candidate Eugene V. Deb’s optimistic view that “an aroused, enfranchised, enlightened womanhood [would] ultimately sweep into oblivion every agency of human oppression that today block[s] the way to the emancipation of the race.”

The first Woman’s Day in New York was observed on February 23, 1909. Turning out a few thousand celebrants, meetings around the city featured addresses by prominent suffragists such as the Women Trade Union League’s Leonora O’Reilly and the Political Equality League’s Priscilla Hackstaff in addition to socialists like Anita Block, Meta Stern, Meyer London, and Algernon Lee.

Besides chanting the slogan that O’Reilly had recently coined at a protest in Albany (“We do not want the ballot, we need it”), speakers lambasted elite conservative opponents. London in particular derided the privileged, male politician who would sermonize about the “sanctity of the home” while sending “our children to the shop,” or who would “meet a lady in a car, tip his hat, and offer a seat,” but refuse to “make a law that [would] provide a seat for a woman who works for ten hours a day in a factory.”

They also drew attention to the especial oppression faced by working women as subjects of sexual, industrial, and political exploitation. As Theresa Malkiel eloquently put it: “Though doing a man’s work in the shop and the woman’s in the home, her compensation amounts to but half of the man’s wage. Though being the bearer, educator, and often supporter of the future generation, she remains still powerless to have a say regarding its welfare.” Along these lines, subsequent IWD demonstrations have often focused on garnering recognition of and compensation for women’s unpaid domestic labor.

The success of the original Woman’s Day encouraged the delegates of the Second International Conference of Socialist Women to follow suit and adopt it at their 1910 meeting in Copenhagen. Led by Clara Zetkin—the outspoken editor of Equality, the German Social Democratic Party’s magazine for working women—Women’s Day took on its current international character, seeking to “aid in the attainment of women’s suffrage” worldwide.In Europe, many of the women’s suffrage movements were led by elite and middle-class reformers who favored limited voting rights based on property ownership. Thus, IWD was a specifically proletarian response to mainstream suffragist politics, one that insisted upon the necessity of pushing for the political participation for all people of all classes.

The first IWD was celebrated on March 19, 1911, which was the anniversary of an 1848 mass uprising against the King of Prussia. As one of the many pledges he made to the German people in order to avert a full-scale revolution, Frederick William IV actually agreed to grant voting rights to women. In the end, it turned out to be an empty promise. The choice of date, then, was both a reminder of the power of the people united and a warning never to compromise with your oppressors.

In 1913, March 8 became cemented as the exclusive, official date for IWD. Given its political origins, IWD celebrations were not surprisingly confined for the most part to socialist countries for several decades following its creation. On March 8, working women all around the world would take to the streets together. If they had a family, husbands were expected to stay home with the children.

Historically, such IWD demonstrations have had some significant political impacts. In Russia, where, according to Communist Alexandra Kollontai’s 1920 account, “hunger, cold, and the trials of war broke the patience of women workers and peasants,” a militant mass protest on IWD in Petrograd is credited as being a major catalyst and official starting point of the 1917 Bolshevik Revolution.

March 8, 1975 in Cuba marked the implementation of their Family Code, which made “the equal rights and duties of both partners” the official, legal basis of marriage. Amongst other things, the code called for men and women to equally share the labor of housework and childrearing.

Today, countries all across the globe—from India to England, Canada to Cameroon, Pakistan to Australia, Trinidad and Tobago to Malaysia—hold parades, demonstrations, conventions, and festivals to carry on the tradition of IWD. In the 1970s, the tradition was revived in the U.S. by a group of radical feminists in Berkeley, generating a movement that would ultimately lead to the lobbying efforts that designated March as a nationally recognized Women’s History Month.

While Women’s History Month has its roots in IWD and has been instrumental in making the historical contributions of women more visible, it also has lost the militant, class-based activism that characterized the original IWD movement. The shift of focus is telling: National Women’s History Month highlights the often overlooked achievements of past generations of women but does little to actively promote present-day solidarity among women and workers to protest continuing injustices and enact immediate socioeconomic changes.

Since 2001, there has been an international non-profit organization that coordinates IWD events and provides a network for feminist activists around the world. Encouraging a connection with its activist roots, the proposed theme for this year’s events is: “Inspiring Change.” Much like the early 20th century that was rocked by industrial upheavals that spawned the socialist and IWD movements, we are living in a moment of extreme, global economic precarity and inequality following the financial crisis. Gender equity is also far from a moot issue. In spite of gains, women still face grave disparities in income, occupation, and civil rights. A 2011 report by the World Bank, for instance, found that women now account for forty percent of the world’s paid labor force, but only hold one percent of its wealth. In this climate, IWD—especially its founding spirit and objectives—is just as relevant as ever. Hopefully, the day’s rich history will remind us when March 8 rolls around not only to take time to appreciate all that women have accomplished, but also to take to the streets to carry on the fight for social, economic, and political equality.