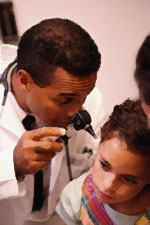 Money was the hot topic at the Budget and Finance Committee meeting yesterday. All were in agreement that every worker should have the right to adequate medical coverage, and supported Supervisor Tom Ammiano’s Worker Health Care Security Ordinance. Small business owners fear that the money they would have to spend on health care will destroy their businesses. Also, citizens worry that if employers do not fund this project, taxpayers will have to make up the difference.

“There will be more specific details to come,” said Supervisor Ammiano. “We want to see what would fly on both sides of the aisle.”

Craig Stoll stated the he was insulted that some are claiming employers don’t do their share to provide medical coverage. He and his wife own two restaurants, Delfina and Pizzeria Delfina, and they provide 73 jobs and medical insurance.

Dr. Mitch Katz, San Francisco’s Department of Public Health director, stated that the ordinance will focus on preventative care such as: pap smears, mammograms and MRIs. The goal is to keep those without medical insurance from going straight to the emergency room. San Francisco spends roughly $25 million yearly in medical costs for the uninsured.

“Those who lack insurance are less likely to receive preventative care,” said Dr. Katz. “Locally and nationally this is a drain on our public health system.”

There are roughly 300,000 emergency visits from 160,000 different patients per year, according to Dr. Katz. There is still much work to be done in naming each individual who is in need. An estimated 40 percent of those without insurance are already in the public health system; whether it is from Medicaid, Medi-Cal, Healthy Kids or Healthy Families. Since some of the uninsured are already identified, this should keep the overall cost down. It will cost between $7 to 8 million to expand the existing public health care system to uninsured workers.

“Finances will be the trickiest part,” said Dr. Katz.

Businesses who already provide insurance for their employees will be exempt from the mandate. Nonprofit businesses that have a contract with the city of San Francisco will also be exempt from the order. Employers who do not offer medical coverage for a minimum of one year will be required to pay the monthly fee.

Kevin Westley, executive director of the Golden Gate Restaurant Association, said that most restaurants already provide insurance for full-time employees, but not part-time. And, it is also a possibility that restaurants may hire less part-time employees. He hopes that this will not discourage restaurants from calling San Francisco home. But he said that he too agrees that everyone needs medical coverage, but he’s approaching the ordinance with “cautious optimism.”

Paul Sonn, from the Brennan Center for Justice in New York, said San Francisco is moving in the right direction with this ordinance. He worked on the Health Care Security Act in New York City—the requirements begin July 1, 2006.

“We must have employer responsibility in our system,” said Sonn. “This will prevent erosion in providing medical coverage.

In New York, Sonn stated that there was no opposition. However their requirement is on for large businesses, like grocery and retail stores. Only 300 employers will be obligated to pay a portion of the employees’ health plan.

Several small business owners were present yesterday to let the committee know that they want to be neither forgotten nor ignored. Many told the committee that they simply couldn’t afford to pay a fee per employee.

Supervisor Chris Daly said that he is sensitive to businesses that make a minimal profit.