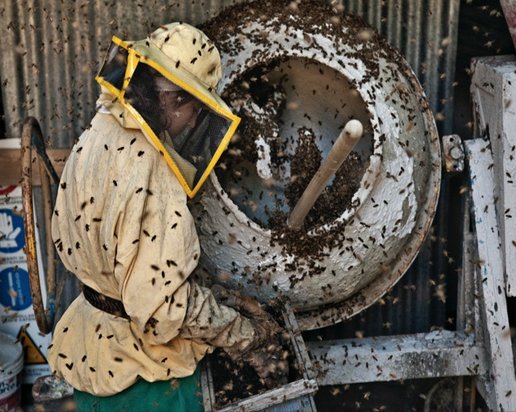 Enigmas and realism, family drama and coming-of-age tale, historical legacies and present day challenges: these are all elements of the 2014 Cannes Film Festival Grand Prix winner “The Wonders.”  Written and directed by Alice Rohrwacher, the film was first shown to San Francisco Bay Area cinephiles as one of the offerings of this year’s San Francisco International Film Festival.  Now Rohrwacher’s amazing film gets a commercial theatrical release on Thanksgiving/Black Friday weekend, a time of sentiment and commercialism that male lead character Wolfgang would readily spit on.

Wolfgang is patriarch of a family of beekeepers living on an isolated farm in the Tuscan countryside.  With wife Angelica, four daughters, and family friend Coco, this household primarily raises bees so the insects’ honey can be harvested for sale.  Gelsomina (Maria Alexandra Lungu), the eldest of these daughters, serves as Wolfgang’s right-hand woman on the beekeeping.  But over the course of one summer, the eldest daughter’s relationship to her father will subtly shift.  The agents of that shift are silent German delinquent Martin and beautiful reality TV show hostess Milly Catena (Monica Bellucci).

There’s an irony in titling this film “The Wonders.”  The setting seems more geared towards the crushing of spirits.  The rocky landscape of the farm creates a feeling that hope could not grow here.  The endless drudgery needed to keep the farm going never feels sufficient.

The easy teamwork of father and eldest daughter fools a viewer into thinking running the farm is a plausible venture. Gelsomina keeps her younger sisters in line as much as possible when beekeeping work is being done.   Their obtaining new bees and herding of current ones is inventive and efficient.

Why does Martin’s arrival disrupt Gelsomina’s relationship with Wolfgang?   What begins as a way to bring a few more euros into the household turns into a catalyst for unleashing Wolfgang’s subsumed sexism.  Neighbors’ kidding about Wolfgang’s inability to produce a son comes across as a long-standing attack on the German’s manhood.  Martin’s display of upper body strength begins the father’s expressing his long suppressed desire for a male heir.  The speed with which Wolfgang cuts Gelsomina out of the tasks they formerly performed together speaks to how the father’s teamwork with his eldest daughter was a matter of necessity rather than respect.

Even without Martin’s presence, it’s not clear Wolfgang’s patriarchal presence deserved respect.   “Challenges” to his authority (e.g. Gelsomina’s interest in the “Countryside Wonders” show) can spark sudden flares of temper.  But given several questionable actions taken by Wolfgang, it’d be difficult to characterize his authority as infallible.

Rohrwacher does give Wolfgang his due.  His objections to bee-killing pesticides and the revelation of his idealistic side via old friend Adrian are positive positions.  But these virtues get overridden by Wolfgang’s inability to recognize Gelsomina’s no longer a little girl.

Can the emotional changes Gelsomina goes through over the course of “The Wonders” have been avoided had Wolfgang been a better father?  No.  The girl’s interest in things outside the closed world of the apiary may have begun with her fascination with Milly Catena’s “exotic” beauty.  Yet Gelsomina’s growing appreciation for real wonders offers an appealing alternative to her father’s world of endless work.

But unlike younger sister Marinella’s appreciation of wonder (e.g. a favorite song playing during a day of honey-making drudgery), the older sister’s sense of awe is more grounded.  The actual production of a “Countryside Wonders” episode is something Gelsomina ultimately realizes is less magical and more kitschy exploitation of an ineptly romanticized past.  A camel’s earlier appearance is not “The Big Animal” mysterious.  Instead it’s a living testament to Wolfgang’s folly.  Obviousness or attention-grabbing are not the wonders Rohrwacher celebrates in her film.

What wonders Rohrwacher’s film champions are enigmas.  The film’s most unforgettable image is that of bees crawling out of Gelsomina’s mouth.  There are no answers on how the girl accomplished this trick.  Did she pop the bees into her mouth and let them crawl out on their own?  How did she prevent the bees from crawling down her throat?  How did Gelsomina stop the bees from getting angry enough to sting her mouth’s interior?  The lack of explanation makes the trick more impressive, even if Catena’s facial expression condemns her as someone who ironically can’t appreciate true wonder.

The film also argues for the possibility of restoring a sense of awe to even the most mundane sights.  Tawdriness is the impression left by a tracking shot of lighted party lights strung along a cave ceiling.  With the lights off, that same cave ceiling conveys a sense of weighted history and unanswerable questions about the people who visited this cave centuries ago.  Alternately, consider a dark barn’s shaft of sunlight seen earlier in the film.  This modest sunbeam becomes transformed by Gelsomina and Marinella’s playing into a drink of light descending from the heavens.

Rohrwacher’s camera avoids imbuing the images mentioned above with a sense that they’re separated from the modern world of TV reality shows and social workers.  By visually making Gelsomina’s trick with the bees seem mundane, the director argues that wonders are not aberrations from our world as much as hidden treasures.

Oddly, Martin most embodies the spirit of wonder.  His general silence and vague criminal background make him someone unpredictable and untamed.  Martin’s ability to whistle is the trait which renders him relatable.  Learning whistling symbolically means the incorporating of wonder into one’s soul.

By centering the final moments of “The Wonders” on Wolfgang and Angelica’s beekeeping family, Rohrwacher offers a wonderful visual summation of her film’s themes.  The metaphor the director employs does not speak of such specifics as when and only vaguely gives a hint as to what happened.  Yet its deliberately ambiguous vagueness shows the reality of how much the viewer may wish to know against how much the viewer can really know.

(“The Wonders” will be opening on Black Friday at the Opera Plaza Cinemas (601 Van Ness, SF) and the Shattuck Cinemas (2230 Shattuck, Berkeley).