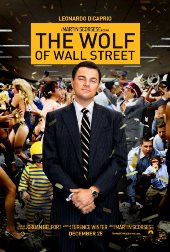 As I sat in the theater watching “The Wolf of Wall Street” I wasn’t exactly thrilled that a movie with so many disability jokes was receiving Oscar buzz (though I’ll admit I joined the masses in celebrating Leonardo DiCaprio’s chance at an Academy Award). Offensive language, behaviors and references towards disability are nothing new.

The media has long since used disability as a source of cheap humor. After all, it doesn’t require much thought to throw an insult into writing as a quick way to get a laugh.

But here’s the real issue: “The Wolf of Wall Street” is based on a true story. A true story! Granted, I haven’t read the book, but even if I assume the scriptwriters took some creative license in their affronts to the disability community, this “true story” points to the fact that there are people out there to whom such horrendous words and actions are an acceptable part of life.

While the main focus of the disability humor critiques is offense over the word “retarded,” that was far from the worst of it. There were two particular scenes that so callously invoked disability as a joke that I was literally squirming in my seat.

First, I could hardly believe what I was witnessing during a scene in which a discussion was held about purchasing a “midget” to throw at a target, followed by the actual throwing of a little person in a Velcro suit at a Velcro target. I thought for sure this couldn’t be real, but according to a Business Insider article by former stock trader Raj Mahal, this scene wasn’t just for comedic effect: “In all seriousness, I have had breakfast with a guy where there was dwarf tossing at his bachelor party. Before you rush to judgement — who really is the victim here? The dwarf was paid like a giant.”

And herein lies the problem: not only is this kind of atrocious behavior the real deal, but also there are apparently people who can find ways to justify it. Perhaps some little people are okay with degrading themselves for money, but the image projected by this scene in the movie is one that sends a message of utter disrespect towards disabled people. Taking it even further, later in the movie, the disability insults appear once again. As Leonardo DiCaprio’s character, Jordan Belfort, writhes around in the midst of experiencing the effects of drugs, he refers to his spastic movements as the “cerebral palsy phase.”

Within the context of the movie, the audience seemed to perceive the slurs as nothing more than a means of elevating the humor. And from the rip-roaring laughter I could hear behind me, it was obvious the majority of the audience wasn’t the least bit bothered. So, sounding the alarm on “The Wolf of Wall Street,” or on any individual movie that mocks disability, isn’t really what disability rights advocates should be focusing on. Instead, we need to continue to work towards changing the mindset that such mockery is all in good fun.

Remember, media perpetuates reality, but it also reflects reality back at viewers. So while I understand the outrage over all of the disability-related linguistic offenses in “The Wolf of Wall Street,” we need to look at the bigger picture. This kind of language and these kinds of stereotypes are used to excess all the time. Though the amount I heard “retard” and other offensive language was absolutely appalling, it points not to an issue with the movie, but to the fact that disability slurs are dangerously integrated into the English lexicon.

This raises questions I hear all the time. Is it ever appropriate for disability topics or slurs to be used humorously? If so, where is the line and when is it crossed? To be honest, I don’t think there’s straight answer to this. It’s so context dependent. I’ve often been asked why it’s okay for me to crack jokes about my disability, but why I’m up in arms when it’s done by strangers or in various forms of media. Doesn’t that make me a hypocrite?

Well, no. My disability is my experience and my identity. My disability belongs to me. It belongs to disabled people. We’re the ones living our lives, so we know ourselves best. And I’ll even venture to say that the people we’re closest to are (usually) mindful of when making a joke about my disability is appropriate. For instance, when I’m being lazy, I’ll ask my parents to get me something, and they’ll come back at me by asking “What’s the matter? Are your legs broken?” But ultimately, the key is that if you don’t have a deep personal connection to an identity, then you shouldn’t presume to know enough about their life experiences to mock them.

Essentially, there is something very different between finding the humor in a situation and exploiting a situation in an attempt to create humor. I’m generally the first one to make a joke because sometimes, life with a disability is just a big old comedy of errors. It’s pretty hilarious when I’m rolling through a store and discover I’ve been dragging a trail of lacy underwear behind me that got stuck on my back wheel. It’s also rather amusing when a drink I just paid for explodes all over me because I hit a bump at the wrong angle with my chair. If something funny happens or I make a disability-related joke, then by all means, laugh!

That is, laugh with me, not at me. There are no double standards here. It’s simple: taking cheap shots at disabilities for the sake of amusement isn’t merely in poor taste; it’s downright unnecessary. Disabled people do not exist for the sake of contributing to your comedic fodder. Disability is not the butt of a joke. It’s my life.

What do you think? Does media take disability humor too far?

This piece first appeared in themobilityresource.com