The Widespread Impact of COVID-19 on Latinos 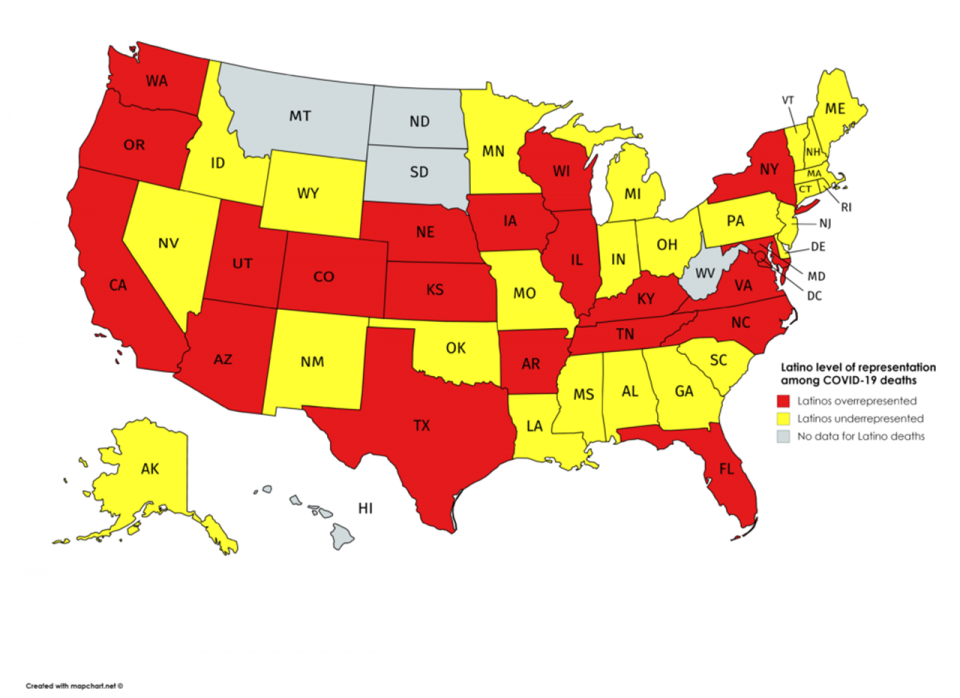 This is my fourth monthly blog highlighting trends on COVID-19 cases and deaths among Latinos. Each month the story has gotten increasingly depressing.1 True to form, following a wide swath of the economy opening up for business beginning in late May and early June, the pandemic lashed widespread hurt on the Latino community in July and up to now.2

In this month’s blog, I provide some continuity on the trends that I have covered over the past few months. There continues to be three states (Hawaii, North Dakota, and West Virginia) that do not provide data on Latino cases and deaths. The other 47 states and the District of Columbia provide information for both cases and deaths or only for one or the other.

The Widespread Impact of COVID-19 on Latinos

Over the last several months, we have seen the increasing spread of the disproportionate impact of the pandemic on Latinos. Table 1 provides an overview across the last four months. Over the last three months, all states except one—New Mexico—have a higher percentage representation of Latinos among COVID-19 cases than that in the overall population. Nonetheless, New Mexico, where Latinos account for almost half (49.1%) of the state’s inhabitants (the highest in the nation), the share of Latinos among the state’s population that has contracted the virus continues to rise from 21.3% in May to 25.3% in June, 31.3% in July, and 43.7% in August. Thus, it is only a matter of time that New Mexico will be like all other states.

The number of states with an overrepresentation of Latinos among COVID-19 fatalities has been rapidly rising over the last several months from one in May to six in June, 16 in July, and 21 in August.

Figure 1 shows the growing number of states where Latinos are disproportionally overrepresented among the COVID-19 deceased. Twenty-one states are in this category, up five from the previous month. The five newest states in this group are Arizona, North Carolina, Oregon, Texas, and Washington. Overall, the 21 states tend to be concentrated in the South, West, and Midwest regions. 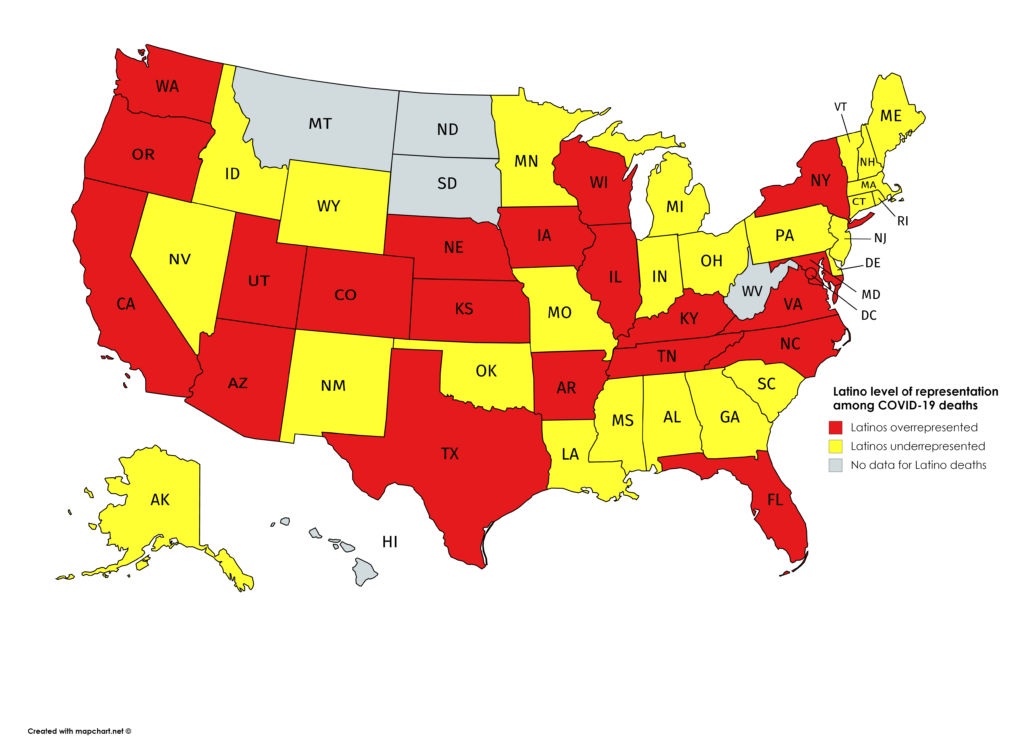 We now examine the number of Latino cases and fatalities between July 1 and August 2. All 46 states with data on Latino infections increased from July to August. However, a dozen states experienced more than a doubling of cases during this period, and another eleven saw significant gains of 50.0% to 99.9%. Figure 2 shows four categories of states by the level of relative change in COVID-19 cases among Latinos over the last month. The states with increases of 50 percent and above are clustered in the two regions—the South and the West—that have sustained major upticks in infections following the premature opening of expanding segments of the economy.

Figure 2. States Categorized by Level of Percentage Change in Latino COVID-19 Cases between July 1 and August 2, 2020 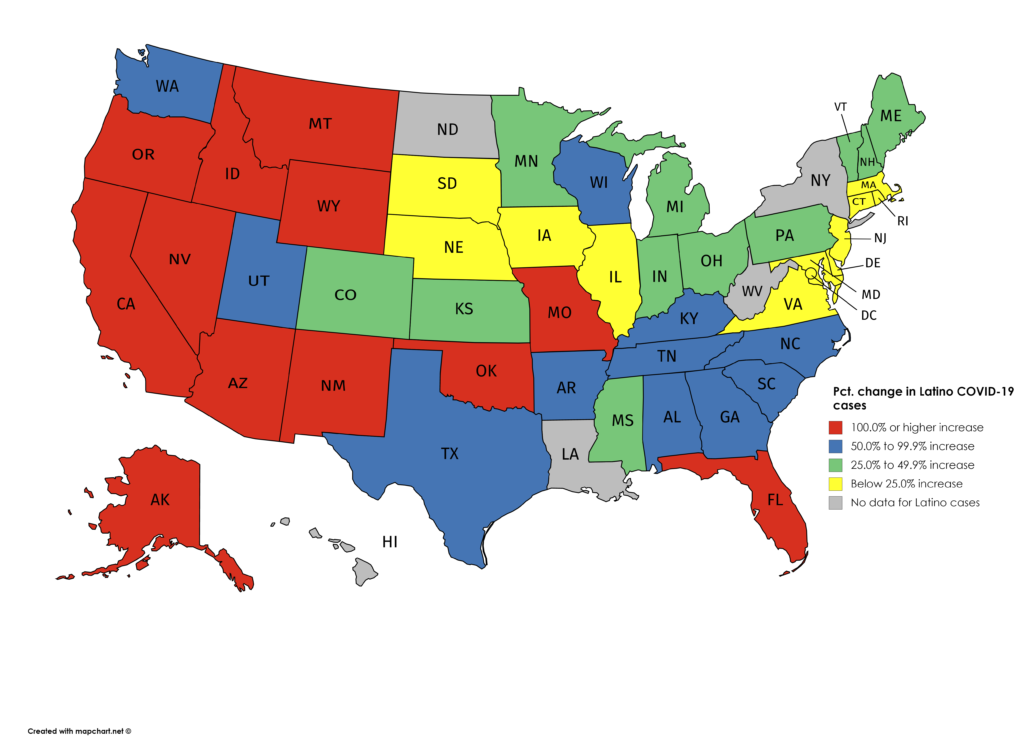 There is also great variability in the level of relative change in Latino COVID-19 deaths during the last month. Four states did not experience any increase in Latino fatalities, three of these with very small Latino populations and where there have been no Latino deaths during the pandemic (Alaska, Maine, and Vermont), the other being New Mexico where Latino deaths remained unchanged at 59 in July and August. In contrast, six states (Texas, Idaho, Arizona, South Carolina, Oklahoma, and Wyoming) saw their number of Latino COVID-19 fatalities at least double over the last month, and a dozen others had percentage upswings of 50.0% to 99.9% during this period (Figure 3). The 18 states with percentage increment levels of 50% or higher in Latino deaths are concentrated in the South and West regions.

Figure 3. States Categorized by Level of Percentage Change in Latino COVID-19 Deaths between July 1 and August 2, 2020 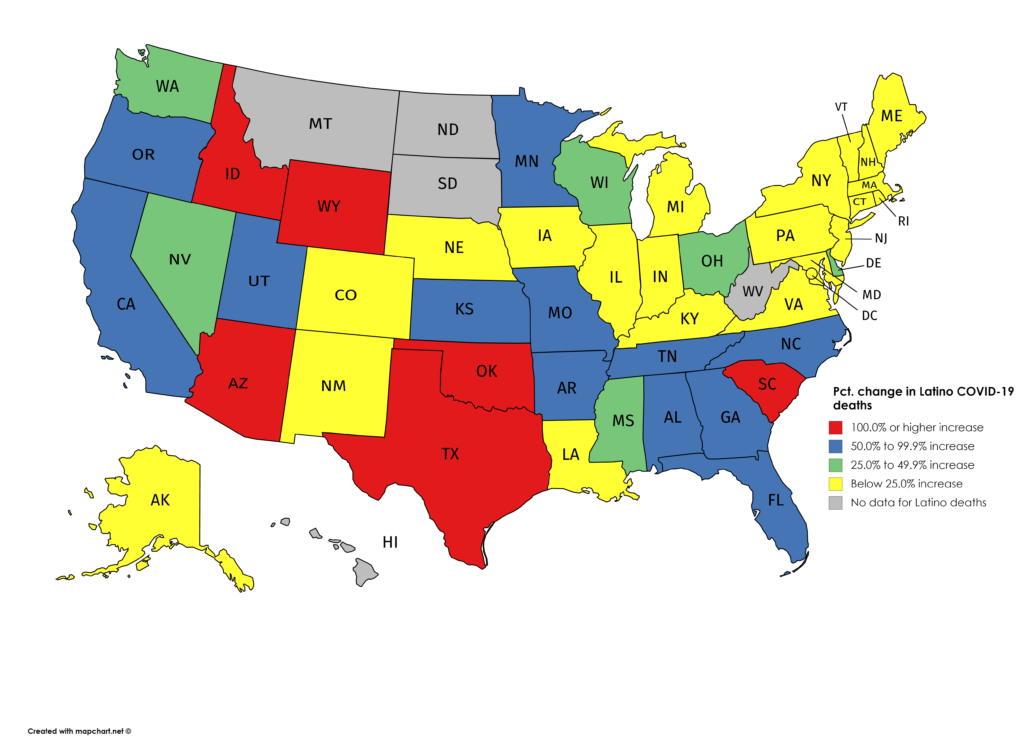 As an aside, last month I highlighted the extremely high levels of missing data on COVID-19 infections and deaths in Texas. I mentioned in my July monthly blog that “Overall, in the U.S. approximately 39% of COVID-19 cases do not have a race or ethnic identification as is the case for 10% of deaths. In Texas, an astounding 91% of cases and 77% of deaths do not have a race or ethnic identification.”1 Over the last month, there have been partial improvements in the Texas data. For one, now only 0.1% of deaths have missing data. On the other hand, 93% of Texas COVID-19 cases have missing data. Thus, in Figure 3 where we examined the percentage change in deaths, Texas experienced more than a doubling of Latino fatalities from the earlier month with part of the added deaths representing a backlog from earlier times. In addition, in Figure 2, we observed that Texas had an increase of Latino cases between 50% and 99%, but in actuality it is likely to be much higher as most of the cases are unaccounted for thus far. I just wrote an invited essay for Poynter that provides a description of this issue.3

Now more than ever throughout the pandemic, it is becoming quite apparent not only that Latinos—along with African Americans—have borne the brunt of COVID-19 cases and deaths, but also the magnitude to which this is the case.  As of the beginning of August, Latinos accounted for approximately 35% of people infected with the coronavirus and a bit more than 19% of fatalities.

This is even more clear in many part of the nation. For example, Latinos make up more than 30% of all persons who have contracted the virus in 19 states with the majority of these being in the southwestern and northwestern portions of the country (Figure 4). In California, Latinos (57.7%) comprise nearly three-fifths of all cases with close to half of cases being Latino in five others (Nebraska, 49.2%; Texas, 48.2%; Rhode Island, 46.3%; Arizona, 45.7%; and Colorado, 45.0%). The 19 states include those with large Latino populations as well as others with much smaller Latino totals. 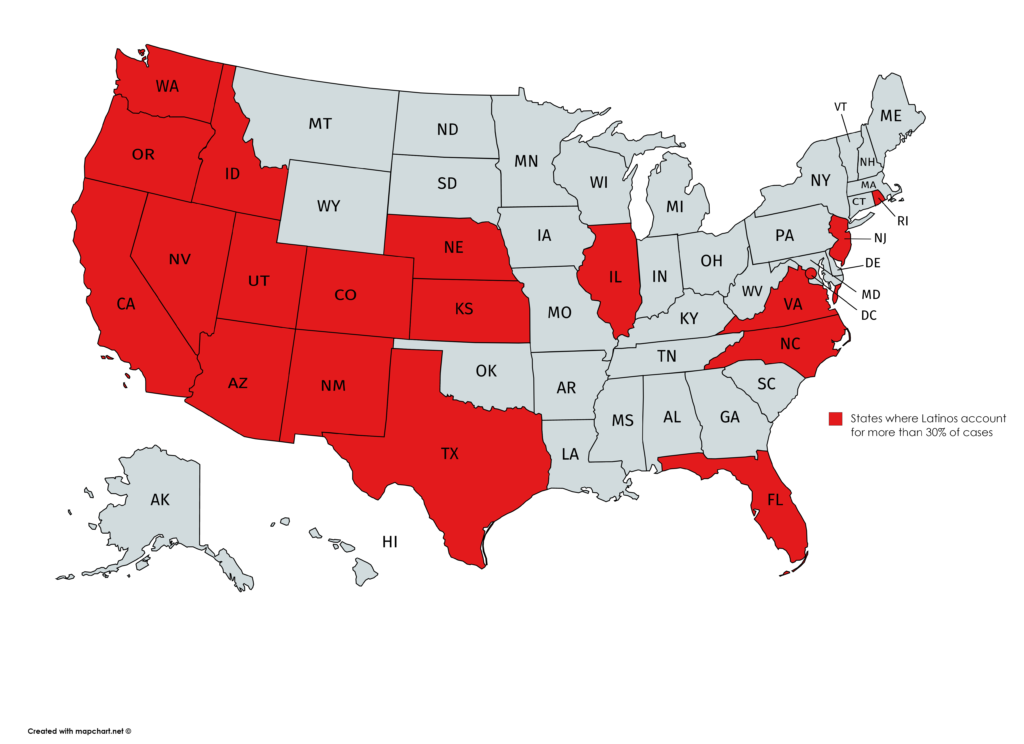 Latinos now make up more than one of every five persons who have died from the COVID-19 disease in ten states (Figure 5). Texas (50.1%) now is the only state where the majority of COVID-19 fatalities are Latino. California (46.3%) is likely to cross this threshold soon. One-third of people who have succumbed to the disease are Latino in Arizona with more than one-fourth being Latino in Florida (28.4%), New York (26.5%), and Nebraska (26.1%). 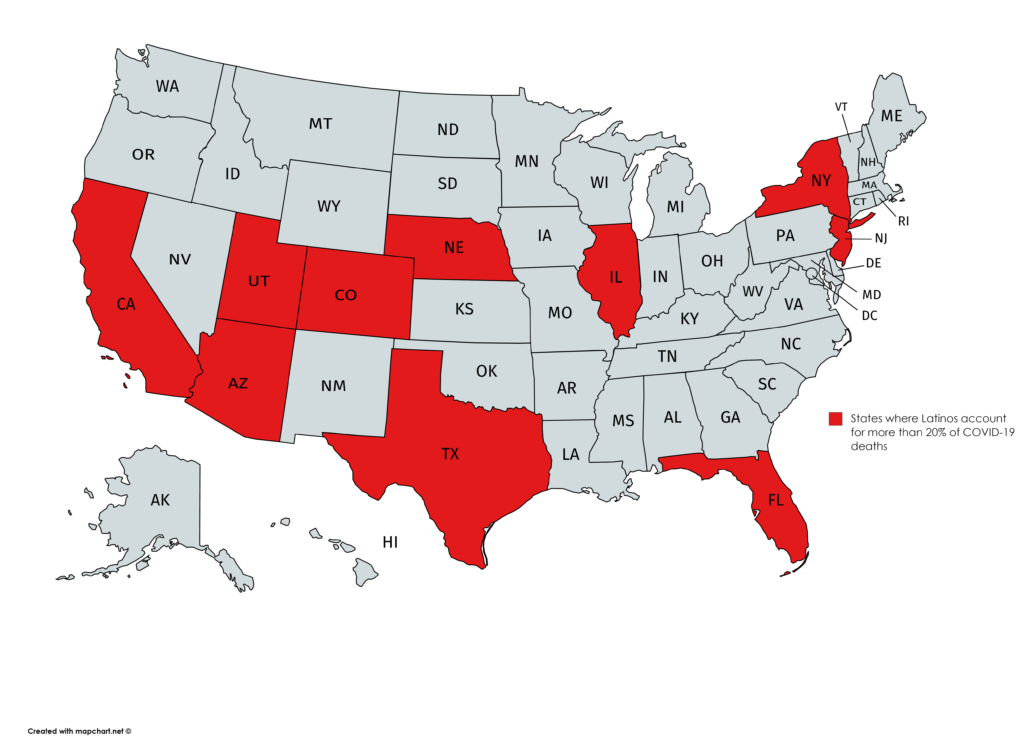 However, as I have pointed out before, the full impact of deaths associated with the pandemic are veiled by the youthfulness of the Latino population. As I have shown in previous blogs, once we adjust for age differences across racial and ethnic groups, we see the very high rate at which Latinos and Blacks are dying compared to Whites.

Demographers control for age differences across groups with the use of age-specific death data and a standard population to derive age-adjusted death rates. For a brief overview of this statistical procedure, see my May blog.1 Unfortunately, the data for age-specific COVID-19 deaths are somewhat limited. While these state-level data have now been available over the last couple of months, their major shortcoming is that, for confidentiality purposes, the actual number of deaths in specific age categories are suppressed (blank appear in the data tabulations instead of the actual number) when there are fewer than ten deaths. While the limitation affects all states and race/ethnic groups, it is particularly problematic for small states and especially for persons of color in states where their presence is relatively small. To try to minimize this statistical shortcoming as much as possible, I will concentrate on the U.S. as a whole and the ten states with the most Latinos in the following analysis.

With these caveats in mind, let’s proceed. In the U.S., as a whole, Latinos and Blacks are much more likely to die from COVID-19 compared to Whites. Once we adjust for age differences across racial and ethnic groups, Blacks and Latinos are dying from the disease at rates that are, respectively, 3.5 and 2.9 times higher than Whites (Table 2).

Among the ten most populous Latino states, the most elevated age-adjusted death rates (AADRs) occur in the three states that experienced the earliest outbreaks of COVID-19: New York, New Jersey, and Illinois. Clearly, the racial/ethnic gaps observed at the national level persist across the states. The one exception is New Mexico, where Latinos actually have an AADR that is slightly lower than that of Whites with the Black population being too small to provide accurate figures due to data suppression of all deaths occurring thus far. Among the other nine most populous Latino states, Latinos have the highest COVID-19 AADRs in six of these (California, Texas, New York, Arizona, Illinois, and New Jersey). In these states, Latinos are dying at rates 4.5 times higher than Whites in Illinois, 3.9 higher in California, 3.8 times higher in Arizona, 3.6 times higher in New York, 3.3 times higher in Texas, and 2.5 times higher in New Jersey. Blacks have the highest COVID-19 AADRs in Florida, Colorado, and Georgia, and are the most likely to die from the disease relative to Whites in Illinois (4 times higher), New York (3.6 times higher), Colorado (3.5 times higher), and Florida (3.4 times higher).

Table 2. COVID-19 Age-Adjusted Death Rates for the U.S. and the Ten Most Populous Latinos States by Race/Ethnic Group, as of August 5, 2020 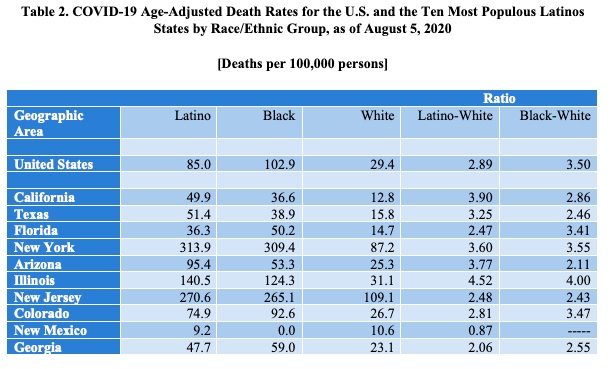 Over the last couple of months, we have seen sorrowful images of the surge in coronavirus infections, people requiring hospitalization, and deaths from the disease in many parts of the country, particularly the South and West regions. This misery has come in the heels of the premature opening of states for business despite public health indicators warning of the agony that would follow under such conditions. The dire predictions did materialize in many parts of these regions as well as elsewhere, but especially in Florida, Texas, Arizona, and California. Many part of Texas, including Houston and San Antonio, where I live, saw soaring cases, hospitalizations, and fatalities from the disease over the last month. In addition, the Rio Grande Valley, my beloved region where I was born and raised, has been particularly hard hit. The Valley, as the area is commonly referred to, consists of four border counties that are among the poorest in the nation. As I show in my essay for Poynter, the numbers of COVID-19 cases and deaths have increased at astronomical levels, more than quadrupling between early July and early August.3 There is much agony in the Valley right now as is the case in many other parts of our nation.

Unfortunately, as is sadly the case, the pandemic will persist for a long time. Certainly, as many schools around the country open up, there will undoubtedly be more rounds of surges of the spread of the virus and fatalities. We need to continue the struggle and ensure that we do our part in keeping ourselves, our loved ones, and people around us safe and healthy. We all need to practice social distancing, wear a mask, wash our hands frequently, and stay home if we do not have to be out and about. Oh, and we definitely need to make sure that we vote in November.

Rogelio Sáenz is professor in the Department of Demography at the University of Texas at San Antonio. He is co-author of the book “Latinos in the United States: Diversity and Change.” Sáenz is a regular contributor of op-ed essays, policy briefs, and research reports to a wide range of media and academic outlets.