The Untold Story of the Civil Rights Movement–in the North 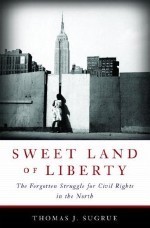 Thomas Sugrue has made a career out of challenging longstanding but false assumptions about United States history. In his award-winning, must-read 1998 book, The Origin of the Urban Crisis, Sugrue disproved the commonly expressed view that the “excesses” of the civil rights movement of the 1960’s prompted a white backlash; Sugrue instead shows that whites had long resisted black efforts for equal rights, and that the alleged “backlash” was simply a continuation of this pattern. Sugrue also refuted William Julius Wilson’s classic argument that deindustrialization, rather than race, explained the decline in black manufacturing jobs; Sugrue showed that race discrimination had largely prevented blacks from getting such jobs, so the steep “decline” cited by Wilson never occurred. Now in Sweet Land of Liberty: The Forgotten Struggle for Civil Rights in the North, Sugrue takes on another powerful myth: the notion that while legal segregation dominated the South, Northern blacks did not face segregated schools, lunch counters, and other public accommodations. But Sugrue shows that the South and North were more alike in their treatment of blacks than commonly realized. His book describes the “forgotten” struggle for civil rights in the North, which is really a story that most whites have never learned; his book seeks to change this, and clearly succeeds.

Thomas Sugrue’s new book was released on November 4, the same day that Barack Obama was elected the nation’s first black president. The timing is ironic, as Sugrue portrays a country whose segregated schools, housing, and ongoing racial discrimination was never confined to the South, but persists nationwide to this day.

When Americans read or talk about the Civil Rights Movement, the focus is on Rosa Parks, the Edmond Pettis Bridge, Freedom Riders, Martin Luther King’s stay in the Birmingham Jail, and other now iconic images and people identified with the American South. The chief theme is that once northerners saw southern blacks being brutalized by thuggish Southern sheriffs, a demand for change thundered through the land, resulting in the passage of the civil rights laws of the 1960’s.

It’s a wonderful story of good triumphing over evil, and of the power of moral values to drive policy. But, as Thomas Sugrue shows, this account is largely untrue. In fact, while protesters were marching in the South,much of the North was a bastion of segregation and overt, government approved racial discrimination, though its lack of separate drinking fountains and express racist laws created a false image of racial justice.

Sugrue provides a very large number of examples of government-sanctioned racism in the North. Housing is a great example.

Consider Morris Milgram, who sought to address the exclusion of blacks from the suburban home development known as Levittown. In 1959, Milgram began constructing a project of single-family homes in the Illinois suburb of Deerfield. He intended the project to be racially integrated, and once word got out, a firestorm ensued. Ultimately, his project was taken by the city in eminent domain, following an election that had the highest turnout in village history. The city took Milgram’s land despite the fact that construction was ongoing, showing the desperate desire of whites to avoid living in the same community with blacks.

Martin Luther King Jr said he confronted worse racism in Chicago than he ever encountered in Mississippi. But Sugrue shows that while white racism against blacks in housing in Chicago and other major cities have gotten the most attention, these problems were pervasive outside the South, with the type of experience Milgram confronted having largely been “written out” of contemporary history.

School Segregation in the North

Our schools teach kids about the brave young African-Americans who entered all-white schools under armed guard in the South, but the implication is that Northern white — outside of notorious Boston — had no problems with desegregated schools. Sugrue shows just the opposite.

Among his many examples is the battle over school desegregation in 1960 in New Rochelle, a suburb of New York City. Like much of the North, New Rochelle claimed that it had no intent to create all-white schools, but that such was simply a consequence of ensuring that kids attended “neighborhood schools.” The fact that federally-mandated housing created segregated neighborhoods (the FHA would not make loans to blacks in white areas), and that many districts were gerrymandered to ensure all-white schools, did not alter the white community’s stance that they had nothing in common with the “angry, rock-and torch-wielding lynch mobs of the South who had become stock figures in northern depictions of the southern civil rights struggle.”

Schools were segregated throughout the north through the 1960’s, and largely remain so today.

We all learn about the southern hotels, restaurants and other public accommodations that would not accept blacks, but Sugrue shows this was also a pervasive problem in northern cities. In the 1950’s, blacks were barred from public swimmingpools in Pittsburgh, Denver, Cleveland, Buffalo and other cities outside the South, and even top entertainers were barred from staying in northern hotels.

While northern housing and school discrimination has become at least somewhat known from high-profile battles in Detroit, Chicago, Boston and other cities, Sugrue’s depiction of white-only public accommodations in the north is a real eye-opener. The fact that blacks were barred from amusement parks in such northern cities as Cincinnati into the 1950’s is not widely known, and is a critical fact about the reality of racial attitudes outside the South that remains hidden.

Sweet Land of Liberty aspires to the type of sweeping historical revisionism found in the works of Taylor Branch. But Branch’s three volumes on the civil rights movement is held together by his ongoing focus on Martin Luther King, Jr, and to a lesser extent, Malcolm X.

Sugrue provides a history of the northern civil rights movement without a central character. He instead relies on a large number of little-known figures — Milgram, Herman Ferguson, Anna Arnold Hedgeman — whose presence in the book is relatively brief. A. Phillip Randolph might be the most prominent character whose involvement is tracked over time, but he does not come close to providing the thread to keep the reader focused on a single story.

As a result, this is not a book where readers eagerly turn pages trying to find out what happens next. Rather, Sugrue provides an extraordinary breadth of short episodes that together comprise what is likely the most comprehensive analysis of northern civil rights activism yet written.

Taylor Branch broke up his monumental work into three volumes, with Parting the Waters covering the civil rights from 1954-63, Pillar of Fire from 1963-65, and At Canaan’s Edge from 1965-68. Sugrue might have benefited from ending this book, which includes material from the 1920’s, at the start of the Johnson Administration in 1964 (or the Nixon Administration in 1969), and then writing a separate volume.

His section on the 1970’s includes some great discussion of school desegregation, but overall is a bit scattershot, as if the author had a page limit and was trying to fit in as many ideas as possible in a limited space. The last thirty years are discussed only briefly.

These caveats aside, Sugrue has written another book that sets the standard for the field. Now the challenge is for this true history of northern race relations to penetrate the classrooms, and to begin impacting our public debates.

Randy Shaw is the Editor of Beyond Chron and author of Beyond the Fields: Cesar Chavez, the UFW and the Struggle for Justice in the 21st Century (University of California Press)