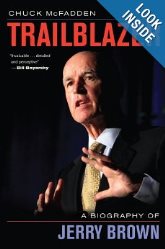 California Governor Jerry Brown is the leading California political figure of his time. He is also among the most important elected officials of his generation. While Brown never became President, no politician of his generation matches his diversity of elected experience and his track record of success. How did Jerry Brown, an iconoclast loner who avoids the stereotype of the back-slapping, hand shaking politician, reach such heights? That’s a question Chuck McFadden addresses in his new book, Trailblazer: A Biography of Jerry Brown. McFadden, who long covered Sacramento politics for the Associated Press, traces Brown’s life from his earliest years through his return as Governor. While it is far from the definitive work on Brown—its 180 pages is a fraction of the length of most biographies—McFadden offers many valuable insights into a politician who has maintained his privacy while living a very public life.

A New Spirit in Sacramento

Jerry Brown topped the ballot the first time I was eligible to vote. I still have the Time magazine with Brown on the cover above the caption, “A New Spirit in Sacramento.” Like many voters, I only knew Brown from his good government advocacy as Secretary of State and as former Governor Pat Brown’s son. He was a young, fresh face, and California desperately needed to elect a Democrat after eight years of Ronald Reagan.

Brown exceeded everyone’s expectations in his first two years in office. He made the most diverse and progressive judicial appointments arguably in United States history. His refusal to accept growth at any cost—a sentiment McFadden traces to his years training to be a Jesuit priest—separated him from nearly all major politicians of his time. Jerry Brown was arguing that increasing highways simply added to congestion decades before this idea became mainstream, and when it was not politically popular.

Californians were proud of Brown after his late entry into the 1976 presidential race brought key primary victories. Brown was a terrific Governor during his first three years, but some progressives became critical of him when he became a self-proclaimed “born-again tax cutter” after the June 1978 passage of Prop 13.

McFadden points out throughout the book that, underneath his non-traditional politician demeanor, Jerry Brown understood voters and how to “do what the political situation seems to demand.” Brown’s embracing of Prop 13 reflected this. While McFadden describes Brown’s switch as “one of the most dazzling flip-flops in the history of American politics,” Brown had no legal alternative to implementing Prop 13.
The voters had spoken in overwhelming numbers, and Brown’s refusal to sabotage the voter’s will is hardly akin to a politician who tells voters he favors one policy and then after elected uses his discretion to implement a contrary plan.

Brown’s embrace of Prop 13 turned many progressives against him. But Brown won a landslide re-election victory in 1978, and he continued to provide the most progressive political leadership of any state in the nation.

McFadden frequently offers insightful analyses of Brown’s motivations, but in what I see as among the book’s biggest shortcomings, he does not explore what possessed Brown to seek the Democratic presidential nomination in 1980. Not only was incumbent Democratic President Jimmy Carter seeking re-election, but he faced a challenge from the left from Ted Kennedy.

Why would the politically astute Brown enter such a race? McFadden offers no answers, only noting that Brown did poorly and that, unlike his 1976 presidential race, his 1980 run was opposed by California voters and caused his favorability ratings to plummet.

Brown’s quixotic 1980 run is important for two reasons. First, it reflected a pattern whereby Brown is great in his early years in a new office but near term’s end seems to lose focus (McFadden cites this to explain Brown’s last two years as Oakland’s mayor). Second, it weakened Brown’s standing when he ran for US Senate against Pete Wilson in 1982, the only statewide race Brown ever lost.

Brown was no longer seen as fresh and new in 1982, with his presidential runs and embrace of Prop 13 leading many to now see him as just another politician. Many Democrats overlooked the fact that Brown’s 1975-1982 tenure was among the most progressive in the history of the United States—he appointed the first gay and lesbian judges, signed the first agricultural labor relations act, vetoed a bill that would have banned local rent control laws and gave woman and racial minorities positions of real power in state government to name just a few of his actions.

A Break From Politics

McFadden shows how Brown used his 1982 defeat to recharge his batteries through spiritual Zen retreats, working with Mother Teresa in Calcutta, and exploring alternative philosophies. No other politician of his stature has been so immersed in meditative, theological and spiritual pursuits.

Yet McFadden shows that Brown never lost connection to the political world. In 1988 Brown became head of the California Democratic Party, sifting resources from television ads to get out the vote drives and grassroots organizing. Although Brown was far ahead of his time in prioritizing grassroots activism, many Democrats wrongly attributed the Party’s lack of success in the 1990 elections to Brown’s refusal to fund more television ads.

Brown quit the Party’s chairmanship in 1991 and ran for President in 1992. He finished second to Bill Clinton in the Democratic race, but, as with his 1980 run, the campaign did not reflect the mindset of a seasoned politician who truly understood the dynamics of winning the nomination.

Brown built a home/policy center in Oakland, and his “We the People” radio show was locally heard on KPFA. He was building roots in Oakland, and when the 1998 mayor’s race had no obvious frontrunner, Brown entered the race and won without a runoff.

McFadden notes how Oakland changed Brown, as for the first time in his long career he was responsible for the daily management of a city. Oakland’s gritty image reframed Jerry Brown as grounded in the real world. Brown alienated progressives by vetoing inclusionary housing, opposing stronger tenant protections, and seeming to support any development project proposed, but he retained voter popularity. Most would say that Brown was the best Oakland mayor in the city’s modern history.

With Oakland giving Brown credibility with law enforcement, he spring boarded to the Attorney General’s office in 2006. This was Brown’s third statewide office in addition to his tenure on the Los Angeles Community College Board and as Oakland mayor.

Had former Los Angeles Mayor Antonio Villaraigsosa had a stunningly successful first term after winning election in 2005, he likely would have won the Democratic nomination for Governor in 2010. But Villaraigosa’s personal and political problems prevented such a run, leaving the field open to Jerry Brown.

And Brown has never been one to pass up a golden opportunity. He swept to the Democratic nomination for Governor, defeated Meg Whitman in a landslide in November 2010, and completed one of the most remarkable political revivals in U.S. history when he returned to the Governor’s office in January 2011.

And after winning with Prop 30 and restoring California’s long troubled finances, Brown is a lock to win re-election next year.

Jerry Brown’s political career is a remarkable story. And I would be remiss if I did not note that it is a story whose roots go back to San Francisco’s Tenderloin neighborhood, where Jerry Brown’s grandfather ran an illegal poker club behind a cigar store front (Brown’s father, former Governor Edmund G. “Pat” Brown, escorted customers to the back).

This is the first book on Jerry Brown in thirty years. While McFadden’s 180 pages would need to be tripled in length to cover Brown’s long career, I have read two other Brown bios and Trailblazer is now the best work available. A definitive biography of Brown awaits his retirement from politics, which means it could be decades away.

Randy Shaw is Editor of BeyondChron and has headed the Tenderloin Housing Clinic since 1982. His thoroughly revised and updated, The Activist’s Handbook: Winning Social Change in the 21st Century, has just been released by UC Press.