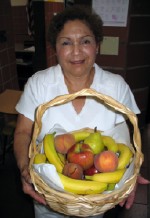 Every time a parent or other concerned advocate takes a good look at the less-than-stellar food children are eating at school and decides to try to make a difference, a wheel risks being reinvented. That’s because there hasn’t been a clear resource for guiding advocates – no matter where in the country they may be – in working for better school food.

Now a group of veteran school food advocates who successfully achieved changes in San Francisco – and made an impact throughout California and beyond – have created a free website to help others work for change in their own communities.

PEACHSF.org, which launched March 26th, is designed to steer advocates toward the most effective routes for making change. Formally named Parents Educators & Advocates Connection for Healthy School Food, the website’s goal is to provide a roadmap for parents and others wanting to get started making changes in their own communities, as well as steering them away from common myths and misunderstandings that can waste their time and energy.

For example, the website’s “What We Believe” page, begins:

We believe in being honest about what it takes to fix school food. We don’t believe in magical thinking, or that it just takes the will to fix the problem – it also takes a whole lot of money and enormous effort.

We believe that the National School Lunch Program and the School Breakfast Program are almost criminally underfunded by the federal government.

I have been working with other San Francisco advocates to improve school food since 2002, when I led a pilot project that replaced soda and junk food with water and healthier snacks at my sons’ diverse urban public school, Aptos Middle School in San Francisco.

“That was a radical idea then,” says Dr. Patricia Gray, part of the volunteer PEACHSF team and a veteran school administrator who was Principal of San Francisco’s Balboa High school when it pioneered a series of improvements. In August 2003, Balboa became the first San Francisco high school to follow Aptos’ lead in removing soda and junk food; a few years later it was the first San Francisco school to offer a salad bar, and then the first lunch program to eliminate separate a la carte lines and make all menu choices available to all students, regardless of income.

The improvements piloted at Aptos and Balboa became part of San Francisco’s district wide Wellness Policy, first drafted in 2003, and within a few years, California state law had raised nutrition standards for foods and drinks sold at schools. The once-radical idea of banishing soda sales is now state law in all California public schools.

PEACHSF offers detailed but reader-friendly advice categorized as First Steps, Building Support and Taking Action, from “How to make friends with your nutrition services director” to “Banning sodas in your school: a short organizing guide” and “Where do we start? How to tackle school meals 101.”

PEACHSF offers a form for asking questions and a page for sharing successes. Everyone who cares about better school food is invited to become a regular visitor.

We know that change can happen, but advocates need to be realistic about the challenges. Then they can determine which challenges can be overcome. We don’t overstate the success we’ve achieved here in San Francisco, but we’ve been able to drive continuous change for eight years.

Real change isn’t the stuff you see on reality TV. Real change starts with real people and real, genuine concern for kids, and it is inspiring to seeing how much even just a few dedicated individuals working together can accomplish.

Dana Woldow is the parent of three sons who attended San Francisco public schools from kindergarten through 12th grade. She writes frequently about school food issues and has been the co-chair of the SFUSD student nutrition and physical activity committee since 2003.