The Truth About Satchel Paige 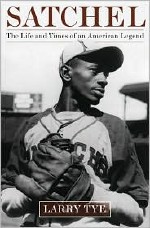 I met Satchel Paige in 1971, as he was walking to a bus to go to an Oldtimers Game at the “Big A” Anaheim Stadium, home of the Los Angeles Angels. I felt I was in the presence of a mythic figure. I “knew” Paige’s baseball history, and he played on my favorite Strat-O-Matic Baseball team, the 1948 Cleveland Indians. But it is fair to say after reading Larry Tye’s Satchel that nobody really knew Satchel Paige, not his teammates, friends, or even his wives. Tye’s book is a treasure, providing the most definitive account of Paige since the Hall of Famer pitched his first game over eighty years ago. Tye portrays Satchel Paige as a happy-go-lucky guy, but at times this is a profoundly sad and moving book. Consider this: despite Jim Crow racism, Jesse Owens won Olympic gold medals, Joe Louis became heavyweight champion, Louis Armstrong was a jazz legend, and Paul Robeson was a star actor. But Jim Crow denied Satchel Paige the national stage he deserved, which was a loss to all baseball fans, but particularly for Paige himself.

Larry Tye deserves the thanks of all baseball fans for seeking out the facts about a legend who consciously perpetuated multiple and often contradictory accounts of his own life. Satchel Paige is likely the most renowned pitcher in baseball history, but accounts of his career have been so reliant on anecdotes rather than contemporary statistics or newspaper accounts that separating truth from fiction has difficult. Tye has written what must now be considered the definitive book on Paige, and my questioning or criticism of his work should be seen in the broader context of his outstanding achievement.

The legend of Satchel Paige begins with his year of birth. Although Tye shows that it has long been established as 1906, multiple sources cite other years. This is important in Paige’s case because it meant that he was 42 years old when he entered Major League Baseball in 1948, and 59 during his legendary three inning stint with the then Kansas City A’s in 1965.

That’s no typo. Paige pitched three scoreless innings in the American League at a time when his contemporaries were about to get Social Security. Paige’s pitching success lasted into his 40’s at a time when baseball players were starting new careers at age 35.

After reform school set him on a path of playing baseball, Satchel Paige proved a talent for the ages. But in the theme that dominates the book, Paige was relegated to “blackball” due to Major League Baseball’s disgraceful refusal to employ African-American players.

Much of the book details Paige’s efforts to deal with being among the greatest pitchers in the nation’s most popular sport, but being denied the right to compete at the highest level. While nostalgia for Negro League baseball has grown, Tye makes it clear that Paige and everyone else knew the difference, and that the great pitcher always resented being relegated to the “chitlin’ circuit.”

Until the 1940’s, baseball leagues that permitted African-American players were a disorganized affair. Paige went from team to team and league to league in pursuit of the sweetest contract. Paige spent much of the year barnstorming, which involved being paid by the game and took him to places like Bismarck, North Dakota, an unlikely spot for a black man from Mobile, Alabama to display his mighty talents.

Paige’s barnstorming included legendary pitching duels with Dizzy Dean and other major league stars, which resulted in the best white players recognizing Paige’s brilliance. But as Tye points out, after the off-season, Dean, Feller and other stars went back to the big leagues, while Paige was left to pitch outside the public limelight.

It’s a sad story. Tye does his best to show Paige’s ability to have a good time, and to generate big money through his own skills and entrepreneurship. Paige clearly made the best of an unfair situation.

But few people from the 1920’s through the 1940’s were so unfairly deprived of their rightful place in history than Satchel Paige. That’s why this book needs to be assigned in college sociology, race relations, and American History courses, and not relegated to the sports department.

Clearly driven to rectify an historic injustice, Tye ardently defends Paige against many of the criticisms lodged against him. But sometimes he protests too much.

For example, in response to team owners who attacked Paige for breaking contracts, regularly switching teams and leagues, and basically not caring about anyone other than himself, Tye sees Paige as a precursor of the baseball free agents that now dominate the game. But Paige’s history had no connection to the arbitration ruling that freed baseball players from owner’s total control. Paige showed a lack of loyalty to owners and fans that treated him well, and appears to be someone whose own difficult upbringing made him reluctant to sacrifice for others.

Tye spends surprisingly few pages on Paige’s days with the 1948 Cleveland Indians, though he notes that Paige pitched less than an inning in the World Series that year (the last won by the Indians). It would have been helpful for him to quote contemporary sportswriter accounts of Paige’s value to the team, rather than create the impression that Paige was unfairly slighted in the Series.

During the 1950’s, Paige played on a number of baseball teams – like the Harlem Globetrotter-like Indianapolis Clowns – that many thought were demeaning. Yet Tye argues that Paige needed the money so his kids could go to school, an odd statement as the children almost surely attended free public secondary schools. Tye never criticizes Paige’s wild spending on new Cadillacs, hunting rifles, and new suits while his kids barely got the basic necessities; he portrays Paige as profoundly self-centered but then makes excuses for such selfishness.

Tye more fairly defends Paige’s routine violation one of his six rules for healthy living –avoid fried meats they anger up the blood – which I’ve personally quoted for decades. He quotes Paige: “Here I am on some old sorry-assed gravel road four hundred miles from nowhere, what kind of breakfast can I cook on my Coleman if I can’t fry me up something?”

Paige’s personal foibles aren’t the issue; but if Tye is going to raise them, he need not feel so obligated to defend his subject.

Tye appears to accept Paige’s view that he, not Robinson, should have broken baseball’s color line. But it was not, as he suggests, Paige’s flamboyant personality that was the problem, it was his age; Robinson was signed to a Dodgers minor league contract in 1945, when Paige was 39 years old. He was 41 years old when Robinson joined the Dodgers in 1947.

There were few if any major league players of that age, and Paige’s best days were far behind him (a fact confirmed by his post 1947 record). For Branch Rickey to choose the 41-year old Paige as the first black player would have been a tremendous mistake, yet Tye generously quotes Negro League players backing Paige and critical of the Robinson choice.

These and other caveats aside, Satchel is a must read for oldtime baseball fans and anyone interested in the history of either race relations in the United States. Tye has finally brought the true and epic story of Satchel Paige to the public, further justifying the pitcher’s legendary status.

Randy Shaw is the Editor of Beyond Chron. He vividly recalls his interaction with Satchel Paige nearly forty years ago.