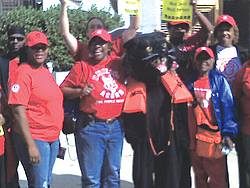 Election Day is less than a month away, and our efforts to make sure that low-income and minority voters have a voice and vote on November 4th are in full swing. Unfortunately, just as we’ve seen in previous election cycles, the more success we have in empowering these voters, the more attacks we have to fend off from partisan forces making unfounded accusations to disparage our work and help maintain the status quo of an unbalanced electorate. We want to take this opportunity to separate the facts of our successes from the falsehoods of our attackers.

On Monday, October 6, as voter registration deadlines passed in most states, ACORN completed the largest, most successful nonpartisan voter registration drive in history. In partnership with the nonpartisan organization Project Vote, we helped register over 1.3 million low-income, minority, and young voters in a total of 21 states. Highlights of this success include:

An estimated 60-70 percent of our applicants are people of color.

At least HALF of all are registrations are from young people between 18-29.

We are proud of this unprecedented success, and grateful to everyone who supported us in this massive effort, from our funders and partners to the literally thousands of hardworking individuals across the country who dedicated themselves to the cause and conducted the difficult work of registering 1.3 million Americans, one voter at a time.

And this work is far from over: now begins our effort mobilize these new voters around local and national issues, getting them to the polls and helping to channel their commitment and conviction into an ongoing movement for change in our communities.

As The Nation pointed out recently, ACORN’s success in registering millions of low-income and minority voters has made it “something of a right-wing bogeyman.” Though ACORN believes that the right to vote is not, and should never be, a partisan issue, attacks from groups threatened by our historic success continue to come, motivated by partisan politics and often perpetuated by the media without full investigation of the facts.

As a result, there have been a few recent stories about investigations of former ACORN workers for turning in incomplete, erroneous, or fraudulent voter registration applications. Predictably, partisan forces have tried to use these isolated incidents to incite fear of the “bogeyman” of “widespread voter fraud.” But we want to take this opportunity to set the record straight and tell you a few facts to show how these incidents really exemplify everything that ACORN is doing right:

Fact: ACORN has implemented the most sophisticated quality-control system in the voter engagement field, but in almost every state we are required to turn in ALL completed applications, even the ones we know to be problematic.

Fact: ACORN flags incomplete, problem, or suspicious cards when we turn them in, but these warnings are often ignored by election officials. Often these same officials then come back weeks or months later and accuse us of deliberately turning in phony cards.

Fact: Our canvassers are paid by the hour, not by the card, so there is NO incentive for them to falsify cards. ACORN has a zero-tolerance policy for deliberately falsifying registrations, and in the relatively rare cases where our internal quality controls have identified this happening we have fired the workers involved and turned them in to election officials and law-enforcement.

Fact: No charges have ever been brought against ACORN itself. Convictions against individual former ACORN workers have been accomplished with our full cooperation, using the evidence obtained through our quality control and verification processes.

Fact: Voter fraud by individuals is extremely rare, and incredibly difficult. There has never been a single proven case of anyone, anywhere, casting an illegal vote as a result of a phony voter registration. Even if someone wanted to influence the election this way, it would not work.

Fact: Our accusers not only fail to provide any evidence, they fail to suggest a motive: there is virtually no chance anyone would be able to vote fraudulently, so there is no reason to deliberately submit phony registrations. ACORN is committed to ensuring that the greatest possible numbers of people are registered and allowed to vote, so there is also NO incentive to “disrupt the system” with phony cards.

Fact: Similar accusations were made, and attacks launched, against ACORN and other voter registration organizations in 2004 and 2006. These attacks were not only groundless, they have since been exposed as part of the U.S. Attorney-gate scandal and revealed to be part of a systematic partisan agenda of voter suppression.

These are the facts, and the truth is that a relatively small group of political operatives are trying to orchestrate hysteria about “voter fraud” and manufacture public outrage that they can use to further suppress the votes of millions of low-income and minority Americans.

These tactics are nothing new, and history has shown that they will come to nothing. We’ll continue to weather the storm, as we’ve done for years, and we’ll continue to share the truth about our work and express pride about our accomplishments.

Most importantly, we want to assure you that this good work continues, unabated and undeterred. ACORN will not be intimidated, we will not be provoked, and in this important moment in history we will not allow anyone to distract us from these vital efforts to empower our constituencies and our communities to speak for themselves. If the partisan political machines are afraid of low-income and minority voters, they’re going to have to do a lot better than coming after ACORN.

After all, there are now at least 1.3 million more of them, and they will not be silenced. They’re taking an interest, and taking a stand, and they’ll be taking their concerns to the voting booth in November.

And ACORN will be here, to make sure that the voices of these Americans are heard, on Election Day and for every day to come.

Bertha Lewis is a senior organizer for ACORN. Steve Kest is ACORN’s Executive Director. ACORN, the Association of Community Organizations for Reform Now, is the nation’s largest community organization of low- and moderate-income families, working together for social justice and stronger communities.