The True Cost of Sustainable Biodiesel 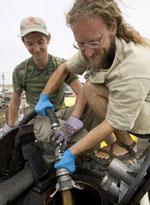 Editor’s Note: San Francisco is perhaps the largest city in America to implement the use of the alternative fuel, biodiesel. The City’s entire diesel fleet, MUNI, Airport Shuttles just to name a few, all use a blend of this more environmentally sound fuel source. The SF Bioufuels Cooperative now numbers over 200 members and alongside the SF Department of the Environment, helped the City to reach it’s goal of converting it’s entire diesel fleet to the use of biodiesel, ahead of it’s December 2007 date. Yet the Bay Area has seen the price of biodiesel rise from it’s $3.25 per gallon for B100, or “pure biodiesel” in 2006, to as high as $5.80 today. Why? Benjamin Jordan of the Peoples Fuel Cooperative, is also one of the biodiesel community’s leading advocates and co-founder of the Biofuel Recycling Cooperative, one of the architects of the successful “SF Greasecycle”, a program run by the BRC & SF Public Utilities Commission, by which restaurant grease is collected around San Francisco and turned into biodiesel. Jordan was kind enough to shed some light on the rising costs of this much needed alternative to our dependance on foreign oil and the important issue of sustainability.

What controls the price per gallon of biodiesel? It seems as though every time the price of diesel goes up so does biodiesel. Why is this when the two industries are so very different? When can I expect the price to go down? All good questions that attempt to decipher the complex road fuel industry that has traditionally been ignored due to the low prices for so long.

Biodiesel will become cheaper than petroleum diesel but it won’t be because the price of biodiesel goes down. This change will occur because the price of petroleum will continue to rise. A good place to start to understand some of the factors that affect the price per gallon of biodiesel is to ask where does your fuel come from? Was it locally produced or did it travel across the country or around the world by train, truck, or ship? What is your fuel made from: virgin soy bean, corn, canola, tropical palm oil, rendered animal tallow or waste vegetable oil and inedible kitchen grease?

The base cost of each gallon of biodiesel is the sum of raw materials costs (vegetable or animal oil feedstock, methanol, catalyst, heat), market influences of supply and demand, and taxes. Additional items that affect the final cost are transportation, distribution, permits, state regulation, and consistent quality assurance of the fuel.

It’s all about the oil! Restaurants have typically been paying $40 to $60 for oil collection services. With the new demand for feedstock, biofuel producers are offering to collect for free. Some producers are even starting to pay restaurants for their grease. Waste oils, usually referred to as yellow grease and brown grease are traded in the commodities market. Market price is listed on indexes such as The Jacobson and can fluctuate significantly as we have seen recently with increases of 40% in a few weeks. Other feedstock prices such as soy beans have risen as much as 94% in the past year. The world is now facing the most severe food price inflation in history as corn, grain and soybean prices climb to all-time highs. One key factor in these increases is the record cost of crude oil which recently reached a high of over $129/barrel. As the world’s main source of energy, the cost of petroleum has significant repercussions on many other resources. The importance of having a local sustainable source for fuel has never been more important. As energy costs rise, so will the cost of alternatives. The less energy involved in producing these alternatives, the better able we will be to control these cost increases.

Biodiesel is a superior alternative to petroleum diesel. Biodiesel producers are unlikely to sell a superior product cheaper than petroleum diesel. There are an estimated 10 million gallons of waste vegetable oil in the Bay Area. Those who have managed to secure a recycled feedstock have separated themselves from skyrocketing soybean prices. A few local producers have successfully managed the cost hurdles of initial investment, feedstock acquisition, permitting and overhead cost of doing business in CA. At the moment the realities are still the same, a locally produced sustainably sourced fuel costs more to produce compared to conventional biodiesel production sources and the petroleum fuel supply chain.

Currently in California there is approximately $0.75 of tax on every gallon of biodiesel sold. While states like Texas enjoy paying no state tax, Californians pay a state fuel excise tax as well as significant sales tax. The state of California also regulates all distributors of biodiesel through a state wide alternative fuel variance program. Although biodiesel has become widely accepted and is extensively used around the country, the state of California still considers it an “experimental fuel”. This program requires distributors to keep records on everyone they sell biodiesel to and compile and submit quarterly reports. This includes the purchasers name, the make, model and year of their vehicles, their estimated usage, and information regarding the performance of the fuel.

The following taxes apply in California:

Not all biodiesel is created equal. Special care must be taken to analyze and certify all fuel is of the highest quality and meets ASTM standards. We feel it is also important to evaluate fuel on a sustainability standard as well. When sourcing sustainable fuel, verifying quality is absolutely critical. Fluctuating feedstock quality, developing producers, new processes, and small batches are some of the factors affecting fuel quality. Constant vigilance from People’s Fuel assures that the fuel you use meets the highest quality standards.

There are many costs involved in running any business. For a fuel distributor vehicles must be maintained, permitted, and insured. Commercially licensed drivers must be paid. State and local regulating agencies require ongoing reporting. People’s Fuel is a not for profit worker cooperative. Most of the labor to run the company has been and is still unpaid.

At People’s Fuel we are committed to supplying fuel from local sources and will not support the influx of imported palm oil biodiesel or virgin soy, canola or animal byproduct biodiesel shipped across the country using petroleum based fuels. We are deeply committed to increasing access through retail stations so more of this fuel can be sold to you. In an industry of volumes, an important cost element will be that the more people who buy sustainable biofuel, the cheaper it will become.

Hopefully this helps to demystify some of the speculations regarding fuel costs. Biodiesel is an industry in its infancy. Start up costs are significant and supply is limited. Biodiesel has struggled to establish itself as a better alternative to petroleum against artificially low costs for petroleum fuel. Many have attempted to make it in the biodiesel industry but have not succeeded. The few who have survived are struggling to make a difference in our world. With over 5 years of experience in the industry there has been no time more exciting than now. The mention of biodiesel is no longer met with the reply of “What” but “Oh, really”… and “where can I buy it?” Municipalities and even entire states have begun to implement biodiesel as a legitimate petroleum free alternative. The dedicated individuals who have shared this vision and made a commitment to sustainable biofuel do so out of the belief in locally produced energy, fuel security, green collar jobs, and a cleaner healthier future for us all.

What are the true costs and scale of our overall energy consumption? The age of cheap fossil fuels is now behind us. Paying $10.00/g for fuel may happen sooner than we think. It is important that we be conscious of our energy consumption. To help reduce the price of biodiesel and energy in general, when possible drive less, walk more. Telecommute, use public transit, bicycle, carpool, and car share. Through our daily choices we can reduce our resource consumption. Together we can find a petroleum free option and create a solution to this energy crisis.

* It is estimated that 53% of US dollars spent on crude oil leave our country. Nationally, more than 60 percent of the oil our country uses comes from foreign sources.

* Californians use more than 16.5 billion gallons of gasoline a year. That’s enough fuel to drive a car at 30 mpg, three round trips to the sun and back. * Half of all the energy used by Californians is in the transportation sector. * Eighty-two percent of greenhouse gas emissions in the United States are from burning fossil fuels to generate electricity and power our vehicles.

Sustainability in San Francisco and the Bay Area

Currently PFC is only suppling the most sustainable fuel available; inedible kitchen grease methyl esters (IKGME) that is as local and ecological as possible in regards to feedstock, production, distribution and quality. In San Francisco this means that restaurant oil is collected through private industries and the SFPUC through the SFGreasecycle Program (www.sfgreasecycle.org). This cooking oil is then sold to local producers for biodiesel (IKGME) production. The short list is Bently Biofuels, BioEasi, Blue Sky Biofuels and Yokayo Biofuels with other sources arriving from Southern California and Las Vegas Nevada.

The SF biodiesel community then has access through the not for profit cooperative distribution infrastructure, the PFC. The PFC purchases biodiesel from all of these manufactures and makes it available for delivery and at the pump through mobile fueling at Rainbow Grocery. As the PFC is a cooperative distribution network, our costs are transparent, established and do not fluctuate. The higher prices and reduced availability is the result when the PFC and the membership in San Francisco are not able to purchase fuel consistently and if we can, it is at a higher price. This means that increases in fuel price and decreases in availability are a result of the industry in general and the community’s buying power.

The communities buying power, or a joining of people creating a fueling network through the fueling cooperatives, will help keep oversight and prices appropriate for the fuel. Currently for petroleum, the US Congress takes care of the policing and oversight of the industry. They could do better for sure. Here locally, community awareness/involvement will be the only way to keep the biodiesel sustainable, available and equitable. Unfortunately there are many more steps for the biodiesel cooperatives of the Bay Area and the rest of California to work more closely to keep the fuel available and as cheap as possible. This is where we as consumers must play our roll and use our cooperatives to establish a supply of consistent high quality fuel from local industries.

Benjamin P. Jordan, P.E., is a Technical Consultant and provides civil engineering expertise for sustainable ecological design projects including water conservation, biodiesel production and permaculture education. He is also the co-founder of the SF Biofuels, Biofuel Recycling and Peoples Fuel Cooperatives, as well as Healthy Fuels, a non-profit organization that promotes sustainable and environmentally sound biofuels. He can be reached at http://www.biofuelrecycling.org