The Tragedy of Jean Quan 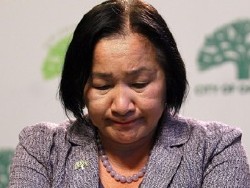 As the Occupy movement moves to a post-camping phase, left in tatters is the once promising administration of Oakland Mayor Jean Quan. Never the favorite of the city’s Downtown establishment, Quan’s response to Occupy’s presence at Frank Ogawa Plaza has permanently destroyed much of her progressive base. Quan will either be recalled or not seek re-election; either way, Oakland progressives have lost a potential ally in efforts to end the city’s longstanding practice of top-down decision making, and its prioritization of Downtown over neighborhood interests. The tragedy is that Quan abandoned the collaborative approach that had served her and the city well. Instead, she unilaterally ignored better options for dealing with growing pressure around Occupy.

Upon taking office, Mayor Jean Quan hoped to unify Oakland and she has – against her leadership. Quan went from turning Oakland into a national embarrassment by overly aggressive police tactics to being perceived as pathetically weak; virtually nobody is out there defending her handling of Occupy.

Yet prior to becoming Mayor, Jean Quan was a longtime community activist who fought on the progressive side of nearly all issues for four decades. Her election brought a collaborative style of leadership that Oakland long lacked, and, the relentless attacks on her in the San Francisco Chronicle notwithstanding, she had made many people feel very good about the city’s future.

All of these good feelings about Jean Quan are now gone. And the tragedy is that Quan’s inept response to Occupy was a departure from the collaborative approach that had served her and Oakland well.

Why Did Quan Act Alone?

Imagine if Jean Quan had asked State Senator Loni Hancock, Assemblymembers Sandre Swanson and Nancy Skinner, Congressmember Barbara Lee, top labor and religious leaders, and community group leaders to come up with a unified response to public pressure about ongoing camping in Ogawa Plaza. This would have taken ownership of the issue out of solely Quan’s hands and vested in the city’s broader political and civic leadership.

Would some leaders seek to avoid getting involved in what appeared to be a political losing issue? Absolutely. But Quan would have reframed the issue as requiring a collaborative solution, rather than a unilateral decision by the mayor.

Contrast Jean Quan’s unilateral response to that of San Francisco Mayor Ed Lee. The facts were clearly different, but the reason Lee did not repeat Quan’s mistake is that he consulted with a broad swath of political and community leaders and concluded that his own initial reading was not where he should go.

Quan tried to invoke collaborative leadership after millions saw Jon Stewart lambasting the police violence against Occupy Oakland, but it was too late. Nothing Quan did after that event could repair her lost credibility, effectively ending what could have been a progressive, transformative mayoralty.

Quan’s failure toward Occupy harkens back to liberal U.C. Berkeley Chancellor Clark Kerr, who alienated both right and left in responding to 1964 Free Speech Movement. Like Quan, Kerr had a history of support for social justice struggles and even lost a Cabinet appointment because he had been on an FBI blacklist.

Yet despite his background, Kerr dismissed the Free Speech Movement as “a ritual of hackneyed complaints”’ and accused its leaders of being influenced by Communists. Like Quan, he alienated the left by initially cracking down on the protests, and then lost conservatives when he changed course and agreed to the students’ demands.

Kerr was fired by the UC Regents in its first meeting after Ronald Reagan was sworn in as California’s Governor in 1967. Mayor Jean Quan now awaits a similar fate from voters.