The Traditional Family that Prop 8 Defends 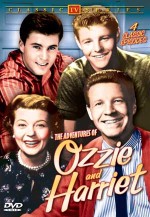 I am so sick and tired of hearing proponents of Prop 8, which will outlaw gay nuptials in California, talk about traditional marriage. What is this “traditional marriage” that the religious right thinks is the end-all and be-all of human existence?

In the 50 and 60s, it was glorified in sitcoms such as Ozzie and Harriet and the Donna Reed Show. Those popular comedies presented a portrait of white bread families that didn’t look anything like my own very ethnic clan. I’m not sure that many families in America actually behaved like the Nelsons or the Reeds. They certainly don’t these days. A examination of some quick statistics shows that “traditional marriage” is not all that the Christian zealots make it out to be. It probably never was …

Not only do half of all heterosexual marriages in America end in divorce, but in California that number is much higher. Even when heterosexual couples remain together, they don’t exactly live in wedded bliss. Unless you consider child sexual abuse, spousal abuse and child neglect part of the joys of the right wing’s most sacred of institutions.

According to the American Association for Marriage and Family Therapy, one in four girls and one in five boys is sexually abused by a family member or friend of the family before they are 18. That includes in conservative Christian families, too. Family values, anyone?

When they’re not victims of sexual assaults, children are being beaten and neglected. Childhelp.org reports that four kids die every day because of child abuse and neglect. Seventy-five percent of those children are under four. The site also says that “a report of child abuse is made every 10 seconds.” That equals about three million reports a year. Which many experts believe are only the tip of the iceberg.

Then there’s spousal abuse. More than three women a day are killed by their husbands, according to endabuse.org., which also reports, “Pregnant and recently pregnant women are more likely to be victims of homicide than to die of any other cause.”

When women aren’t being murdered, they’re being beaten by their husbands. In this country, endabuse.org estimates that from 960,000 to three million women are abused by husbands or boyfriends each year.

Worldwide, one in six women is a victim of domestic violence. That’s according to the “World Health Organization’s Multi-Country Study on Women’s Health and Domestic Violence Against Women.” The study was done three years ago. By now, the number of women beaten in traditional marriage may even be higher.

Dr. Lee Jong-wook, Director-General of WHO, said that “women are more at risk from violence at home than in the street.”