The Time to Act is Now: Immigrants Strike in Oakland 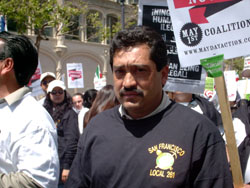 This is a movement best symbolized by the endless procession of strollers, pushed by students, teachers, and workers. As the sun blazed in the brilliant blue sky overhead seemingly shade-less East Oakland, car horns blared deafening approval all along International Boulevard while ubiquitous Mexico and US flags fluttered. Students and workers, parents and children boycotting school and work and clad in crisp white t-shirts trekked the arduous nine mile hike from 98th St and International Blvd. to the Federal Building in downtown Oakland at 14th and Broadway.

The May 1st economic boycott was initially called for by immigrant rights groups and community organizations. Spanish-language media outlets widely publicized a broad call for a boycott supporting immigrant rights. The rapid growth of an immigrant social movement only continues to gain momentum at a rate that surprises everyone including the very organizations and individuals who had originally called for marches to oppose various legislative bills that would criminalize undocumented migrant workers. The May 1st wildcat strike falls on the heels of several of these mobilizations that during the past month have turned out more than a million people who have flooded the streets, demanding better working conditions and human rights for undocumented workers.

In East Oakland, many storefronts were closed for the day. Although some shop owners chose to shut down in order to demonstrate solidarity with the immigrant march and economic strike, others closed out of sheer logistics: Without the Latino participation that buoys the East Oakland economy, staying open during the boycott could result in lost revenue. However, in the absence of regular commerce, the streets and sidewalks were far from desolate; Oakland teemed with pride and celebration. Estimates made by the Oakland Police concede that at least 6,000 people passed through the Latino stronghold, Fruitvale, during the peak of the march.

Meanwhile in Los Angeles, police there estimated that 400,000 people inundated the city streets during May Day. The San Jose Mercury News reported that 100,000 people were out in San Jose. In San Francisco, more than 50,000 people lined the walls between Justin Herman Plaza and Civic Center.

Elsewhere in the world outside the US, May 1st, or May Day, is celebrated annually as International Worker’s Day. The origins of the holiday date back to 1886, when labor strikes fighting for the eight-hour workday culminated in police riots in Chicago. Eight of the main anarchist labor organizers – most of whom were immigrant workers themselves, from Germany – were eventually sentenced to death, charged with a subsequent bombing. These anarchist organizers became known as the Haymarket Martyrs, and celebration of their cause has catalyzed social movements and revolutionaries since.

The fact that in 2006 the controversial immigrant economic boycott calling for “No Work, No School, No Buying, No Selling” falls on this charged holiday, seems to be no coincidence. Yet, while both mainstream English-language media accounts and official leaders of ethnic minority communities decry the boycott as too controversial, East Oakland and other major immigrant hubs abound with immigrants and supporters who vocalize little patience for those movement “leaders” and business unions who have publicly opposed the economic boycott, claiming that “the time isn’t right” for militant direct action such as a strike. Overwhelmingly, both marchers and onlookers expressed unequivocal support for the boycott, also called “A Day Without an Immigrant.”

“The strike and boycott are just the beginning,” one man, an immigrant from Mexico who watched the procession from outside Walgreens drugstore, insists. “What is important is that the youth are getting together. That’s the real future of this movement.”

According to Business Week, the nation’s 7.2 million undocumented immigrant workers make up 24% of all farm workers, 17% of maintenance workers, and 9% of employees in production occupations.

Sixth grade student striker Patricia, of Elmhurst Elementary School, grins. She is wrapped in a Mexican flag, with a napping infant strapped to her chest. She walks quickly and purposefully alongside two other Elmhurst student strikers and an older woman who pushes a baby carriage. Her family and her teachers support her participation in the strike.

“We can plan another walk-out,” she declares confidently. “Whatever is next, we’ll be there.”

Entire schools were out on the streets in support of the boycott. Principal Susan Harmon from the Growing Children School in East Oakland steered rows of children across a street, flustered but unmistakably proud. “We’re in school, but all of us are in the march,” she notes. “It’s barbaric to talk about sending people home. Students and parents are extremely supportive of our march. School is open, but many of the kids are out today. We have 150 kids, ages 5 through 12, half Latino, half African-American. We all march.”

Speculating about the response of the larger community to the massive student and teacher walk-outs, Principal Harmon surmises, “Judging from this march, the support is spectacular. This is the most well-organized march that I’ve ever seen.”

Despite the mayhem of constantly wailing traffic horns and the heat of the noonday sun, the march was orderly. There were no apparent sponsoring organizations.

“I heard about this march on Myspace.com,” one sixth grade student striker shrugs, smiling.

Many echo that Spanish-language radio and television stations have been instrumental in publicizing and rallying support for the strike as well as furthering this burgeoning grassroots social movement.

“Are there organizations working on this? I don’t know. But there is organizing,” Veronica insists. She left her job in Stockton, where she lives, to come participate in the immigrant strike. “My brother is out in Stockton, marching there. Everybody’s organizing. We talk to each other.”

Nearby, on a corner, two African-American women and three young girls stand on the side of International Blvd. and watch the march, clapping and cheering. “We live right down the street,” one of the women points.

“I think the protests are brilliant,” one of the girls, a Woodland Elementary fifth grade student, pronounces dramatically. “I think they should do another one for gas because they raising it and raising it*” She indicates the rising prices with sweeping arm gestures, beaming.

Are immigrant struggles connected to other struggles? One of the women nods emphatically: “I think they’re all the same rights. The issues are wages, jobs, equality and discrimination. They’re marching for all of us.”

A second woman, her arms around another young girl, chimes in: “Usually people don’t say nothing except in their houses, but now people are saying what they actually feel, outside. They’re showing everybody else out on the street that the economy can’t make it without immigrant labor.”

In response to the mainstream English media and the labor and movement “leaders” who claim that the strike is divisive, or that the time isn’t right, she rolls her eyes.

“They can kiss ass,” she shrugs, smirking. “We need to have more stuff like this. This is not over.”

“It’s like saying during the times of slavery, people say ‘It’s not the time to free the slaves.’ Those are human beings. It’s always right to give human being their human rights,” says Rosalinda, a Chairperson at University of California at Santa Cruz.

Similarly, Karen, a Chabot College student who heard about the march from a local church, agrees. “When is the ‘right time’ then? After the law [sending undocumented workers back to their home countries] is passed? If we let the government get away with this law, then what are they going to do next? Who are they going to go after next?”

Ana, a department store worker who took the day off, reminds us that just last week the Bureau of Immigration and Citizenship Enforcement (ICE) raided several sites in Latino neighborhoods throughout the San Francisco Bay Area.

“I witnessed the sweep at Costco in San Leandro last Monday,” Ana recalls. “They shut the doors and were harassing everybody for documents. That’s not a rumor; I was there. The ICE say they’re not, but I saw them. They took around 60 people away, including babies from their mothers. I also saw some [ICE] at day labor sites on High Street when I was driving by there.”

Since April 20, at least 2,000 undocumented workers in 26 different states have been taken from their workplaces and arrested by the Department of Homeland Security and local police. More than 275 have already been deported to Mexico.

Sheila, an Oakland resident and Mexican immigrant, marched with her sons, aged seven and nine years old. All of them are on strike from school.

“I think the time to act is now,” she concludes. “We’ve been waiting for so long. I’ve seen a lot of unity*not only among Spanish speaking people, but Chinese, Korean, all the immigrants. This struggle isn’t only for us, it’s for everybody.”