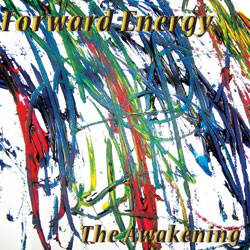 The “Tri-Cornered Tent Show” is Philip Everett – electrified and booglurized autoharp, Anthony Flores – drums, Ray Schaffer – electric basses, and Valentina O. who is a 15 year veteran of rock, pop, art and opera vocalization on the west coast music scene. After many years of obscurity in a dank studio in Richmond, CA, the Tent Show moved to an equally dank studio in San Francisco’s Tenderloin. Now they are emerging into the obscurity of the bay area improv and experimental music scene with outrageous shows. Next Thursday, March 15th, they join Forward Energy and Green Alembic at El Valenciano Restaurant & Bar for the “Three Band Ides of March Concert”.

FORWARD ENERGY was founded in 1998 and had it’s first gig at Radio Valencia in San Francisco that year. The group has gone through several incarnations with top Bay Area musicians including: Eddie Gale of Cecil Taylor’s Unit Structures fame, Alicia Mangan an extraordinarily advanced tenor player, Donald Robinson a seasonsed drummer who alternates between Oakland and Europe, and Scott R. Looney. Forward Energy has played up and down the West Coast as well as in the Midwest and New York City. The current formation includes founder Jim Ryan (who played on Steve Lacy’s weekly jam sessions in Paris during the early 70’s) on flute, saxes, and trumpet, and original member Scott R. Looney on piano. Scott received his BA in music from Coe College, Iowa and an MFA from Cal Arts.

He has been a pillar of the experimental music community since the late 90’s. The group presently includes Rent Romus (who studied with Stan Getz and is a power both on his horn and as an organizer and promoter of the Bay Area experimental music community) on Saxophones; Eric Marshall is a regular bassist with Eddie Gale’s groups and he works in all genres of the jazz idiom. Percussionist Tim Orr studied with Ed Blackwell and plays all styles from zydeco to free jazz. After a year together, the group has become very strong, and we have added C. J. Borosque on trumpet whose grounding in music extends back through several generations.